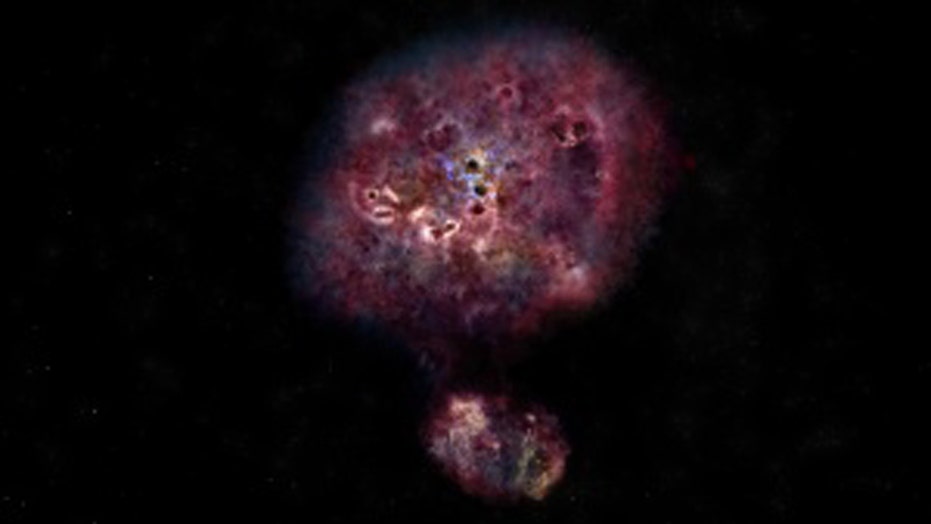 Researchers have discovered a new "monster" galaxy that grew at a high rate during the early part of the universe. However, it died mysteriously, baffling researchers.

The newly-discovered galaxy is known as XMM-2599 and is approximately 12 billion light-years from Earth. The universe itself is 13.8 billion years old, so XMM-259 is being seen as it was during the early part of the universe. A light-year, which measures distance in space, equals 6 trillion miles.

Artist impression of a massive, dusty galaxy. This is similar to what XMM-2599 looked like in visible light when it was forming its stars. (Credit: NRAO/AUI/NSF, B. SAXTON)

The researchers used the Multi-Object Spectrograph for Infrared Exploration at the Keck Observatory in Hawaii to come up with the measurements and distance of the galaxy.

During  XMM-2599's peak, it created more than 1,000 solar masses in stars every year. By comparison, the Milky Way galaxy creates just one new star every year. However, it has stopped producing any new stars, puzzling researchers.

“In this epoch, very few galaxies have stopped forming stars, and none are as massive as XMM-2599,” said University of California, Riverside professor Gillian Wilson in the statement. “The mere existence of ultramassive galaxies like XMM-2599 proves quite a challenge to numerical models. Even though such massive galaxies are incredibly rare at this epoch, the models do predict them. The predicted galaxies, however, are expected to be actively forming stars."

"What makes XMM-2599 so interesting, unusual, and surprising is that it is no longer forming stars, perhaps because it stopped getting fuel or its black hole began to turn on," Wilson continued. "Our results call for changes in how models turn off star formation in early galaxies.”

The researchers will continue to look at XMM-259, despite it being in its inactive phase, as they don't know what it will turn into by the present day.

"We know it cannot lose mass," Wilson added. "An interesting question is what happens around it. As time goes by, could it gravitationally attract nearby star-forming galaxies and become a bright city of galaxies?”

The massive universe was described in a study published in The Astrophysical Journal Letters.