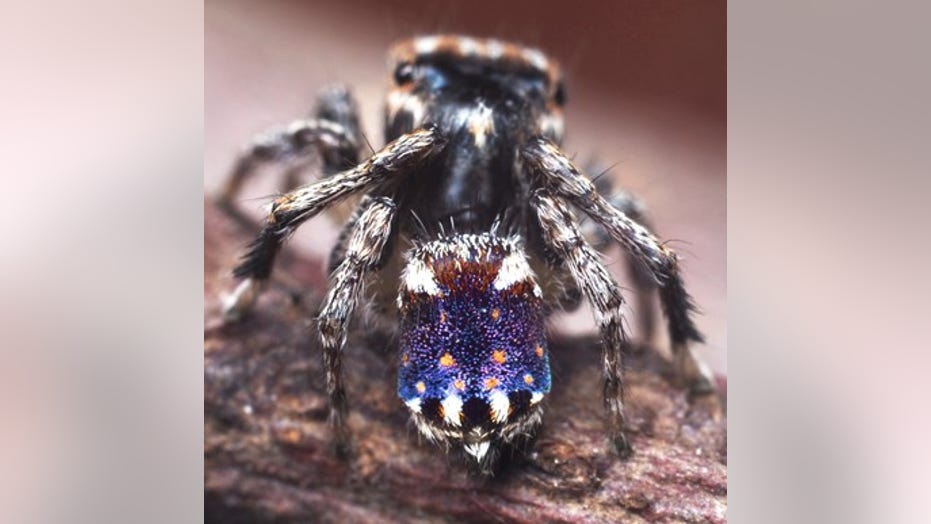 A huntsman spider, also known as a 'giant crab spider,' was photographed in the home of an Australian woman and shared on Facebook. In spite of their appearance, huntsman spiders are not considered dangerous and are often reluctant to bite.

A new species of spider that resembles Vincent van Gogh’s famous “Starry Night” painting has been discovered in Australia.

The spider is one of seven new species of Peacock spider identified by Joseph Schubert of Australia’s Museums Victoria.

“Last year I travelled the country collecting specimens of these new peacock spiders (some discovered by citizen scientists!) and spent countless hours in the lab studying them,” Schubert tweeted on March 26. “Some welcome news in tough times,” added the entomology and arachnology expert at Melbourne Museum.

The spider, which bears a striking resemblance to “Starry Night,” is Maratus constellatus, and was discovered in Western Australia, along with four other colorful species -- Maratus azureus, Maratus laurenae, Maratus noggerup and Maratus suae. Another species, Maratus volpei, was discovered in South Australia and Maratus inaquosus was identified in Victoria

"Starry Night," which is in the collection of the Museum of Modern Art in New York, was painted by van Gogh at San Remy in southern France in June 1889.

Schubert, who is only 22, previously described five new species of Peacock spider in 2019, so the latest discoveries take his tally to 12. Incredibly, he grew up afraid of spiders, according to a statement released by Museums Victoria.

A paper on the seven new spider species has been published in the journal Zootaxa. The research was funded by Bush Blitz Australia and Museums Victoria.

“Some of the species in this paper were discovered by citizen scientists who documented the localities and sent images to me-- their help is so important for this kind of research,” Schubert added.