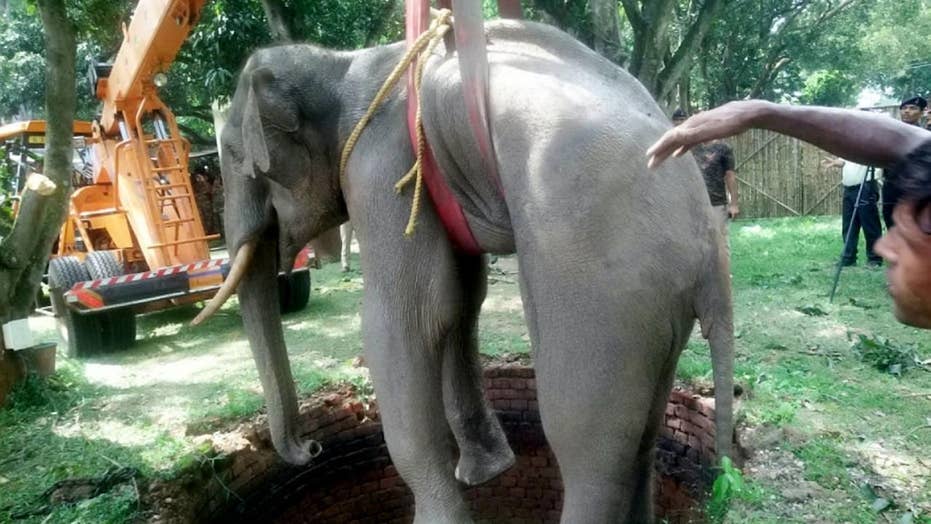 WATCH: Incredible images show elephant getting rescued from a 20-foot well in India

Stuck in a 20-foot well an Elephant gets rescued in India.

I love it when a plan comes together.

Pictures have surfaced of rescuers coming to the aid of an elephant after it fell down a 20-foot well in an Indian jungle.

The rescuers were able to use a crane to get the massive mammal out of the well and onto the back of the truck before being released into the wild, SWNS reports.

Footage has captured how a huge rescue operation was launched to save an elephant stranded at the bottom of a well in an Indian jungle. The clip shows rescuers use a crane to hoist the huge animal out of the well and onto the back of a truck ready for release back into the wild. (Credit: SWNS)

The rescue occurred near the Panagar army camp in Jalpaiguri, Western Bengal, after the elephant wandered in from the Bishnupur jungle.

This is the heartwarming moment an elephant is saved from the bottom of a 20ft well by rescuers using a crane. (Credit: SWNS)

Army officials realized the elephant was trapped after they heard a noise from deep in the well. Eventually, they contacted the Burdwan Forest Department, who provided the crane to rescue the animal.

Upon being lifted out of the well, the elephant was kept under close supervision for a few days, then released into the wild.

Rescuers used a crane to lift the elephant from the well. (Credit: SWNS)

According to the World Wildlife Fund, Indian elephants spend much of their day feeding, often up to 19 hours, while wandering areas that can cover up to 125 square miles.

Their diet consists of grass, tree bark, leaves and roots. They are often seen near sources of water, as they need to drink water at least once a day.