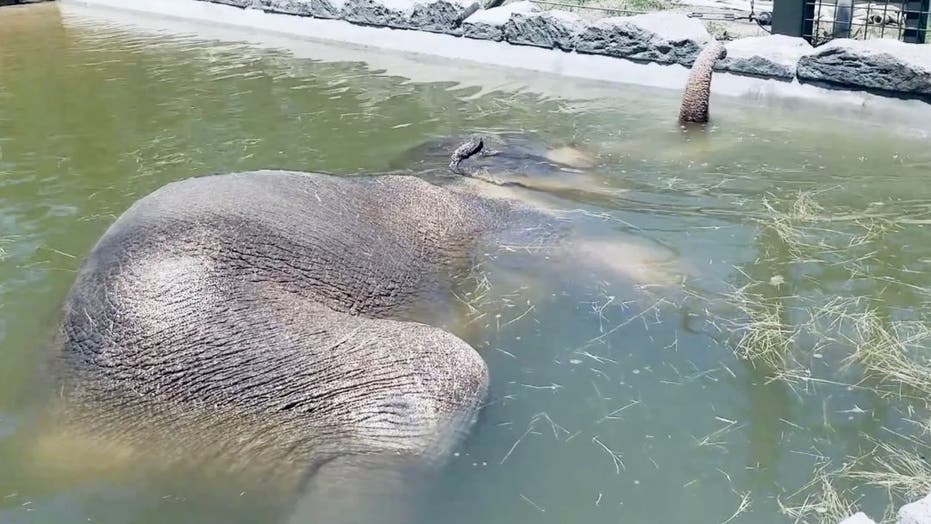 An Asian elephant has gone viral after pictures of it using its trunk as a snorkel popped up.

Colonel, one of seven Asian elephants at the Forth Worth Zoo in Texas, was spotted using its trunk to refresh itself in the late-July heat, British news agency SWNS reports. The 29-year-old massive mammal also has been known to take naps in the water, the zoo's elephant expert, Christine Del Turco said.

“In the wild, there are elephants that swim from island to island in Sri Lanka and places like that, but Colonel is the only one who takes cat naps in the pool," Del Turco said. “Ever since he got used to getting in and out of the pool he’s very comfortable and he takes cat naps every day."

Colonel, 29, weighs almost five tons and is one of seven Asian elephants at the Fort Worth Zoo in Texas. (Credit: SWNS)

Colonel often takes naps in the small, 5-foot deep splash pool for elephants, but it took some convincing for him to go in the pool, Christine conceded.

“It took me some coercion," she added. "For four or five days, he’d just splash himself on the edge of the pool. He wasn’t sure where the bottom was. I coaxed him in there with treats. Now, every time he sees me, he’ll go running into the pool.”

The Forth Worth Zoo, which recently reopened to the public -- with restrictions -- due to the coronavirus pandemic, is undergoing a $100 million renovation plan, which includes a new pool for the elephants, including the 5-ton Colonel.

“The new pool is going to be over half a million gallons of water,” Avery Elander, a spokesperson for the zoo, said. “They’re going to have the ability to go on swims and there will be shallow banks for Colonel to nap in.”

Asian elephants are the largest land animals on Earth, according to the World Wildlife Fund. Considered endangered, there are less than 50,000 elephants in the wild.

The mammals are "extremely sociable, forming groups of six to seven related females that are led by the oldest female, the matriarch," the organization added.