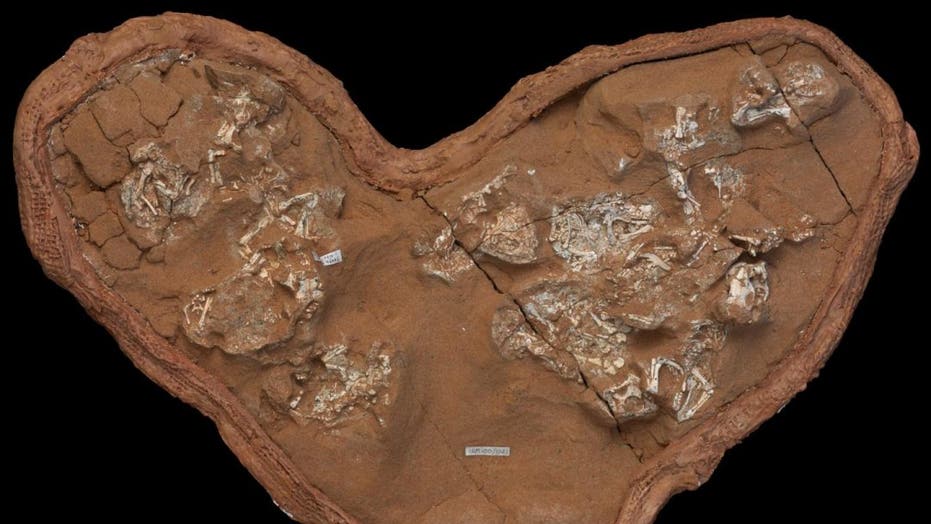 A new study suggests the eggs of early dinosaurs were soft-shelled, going against popular belief.

The study, published in Nature, notes that the first dinosaur eggs were soft-shelled as opposed to hard-shelled, similar to the modern-day turtle.

"The assumption has always been that the ancestral dinosaur egg was hard-shelled," said lead author of the study, Mark Norell, in a statement.

The clutch of fossilized Protoceratops eggs and embryos examined in this study was discovered in the Gobi Desert of Mongolia at Ukhaa Tolgod. (Credit: M. Ellison/©AMNH)

Norell added dinosaur eggs have been found all over the world for the past 20 years. They've been comprised of three groups — theropods, hadrosaurs and sauropods, but no eggs of ceratopsians (which includes Triceratops), which has led him to believe "they were soft-shelled."

The researchers looked at fossilized eggs of two dinosaurs, Protoceratops, and Mussaurus for their study. They found that the eggs and associated embryos "were indeed non-biomineralized — and, therefore, leathery and soft."

"From an evolutionary perspective, this makes much more sense than previous hypotheses, since we've known for a while that the ancestral egg of all amniotes was soft," Yale graduate student and one of the study's co-authors, Matteo Fabbri, added. "From our study, we can also now say that the earliest archosaurs –­ the group that includes dinosaurs, crocodiles, and pterosaurs –­ had soft eggs. Up to this point, people just got stuck using the extant archosaurs –­ crocodiles and birds –­ to understand dinosaurs."

A second study, also published in Nature, notes that a giant 66-million-year-old "soft-shelled egg" was discovered in Antarctica.

"The identity of the animal that laid the egg is unknown, but these preserved morphologies are consistent with the skeletal remains of mosasaurs (large marine lepidosaurs) found nearby," researchers wrote in the second study.

Researchers continue to learn more about the early days of the dinosaurs. A study published last month found that some dinosaurs who faced scarce resources resorted to scavenging and possibly cannibalism.