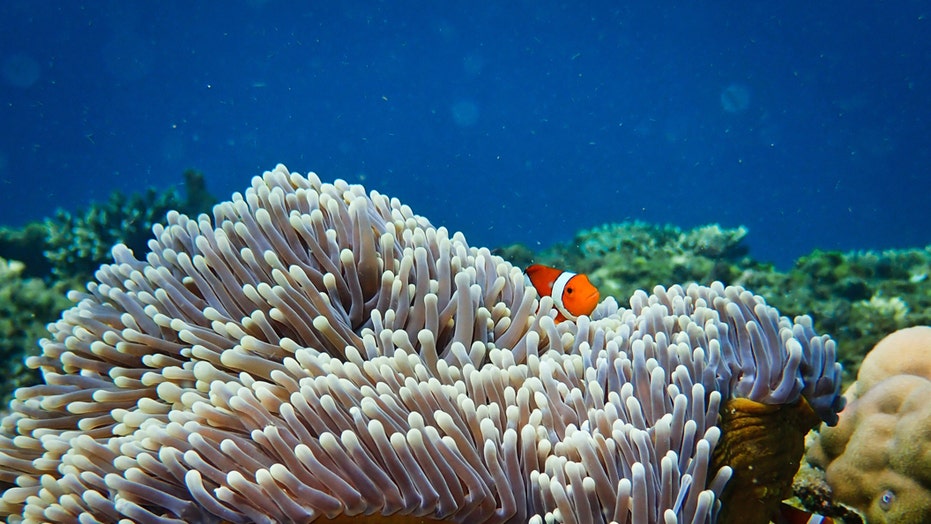 Scientists have looked at various methods to save endangered coral reefs for years, looking at everything from growing them in labs to making them pollution resistant. A new study suggests that sounds from healthy reefs could also play a role in saving them.

Known as "acoustic enrichment," researchers believe that putting underwater speakers near the dying reefs could help bring young fish to the reefs and restore them.

"Fish are crucial for coral reefs to function as healthy ecosystems," said the study's lead author, Tim Gordon, of the University of Exeter, in a statement. "Boosting fish populations in this way could help to kick-start natural recovery processes, counteracting the damage we're seeing on many coral reefs around the world."

A clownfish in an anemone. (Credit: Tim Gordon, University of Exeter)

LAB-GROWN CORAL COULD SAVE ENDANGERED REEFS

The researchers were working on the Great Barrier Reef, the world's largest coral reef system, and placed loudspeakers near parts of dead coral and found "twice as many fish arrived — and stayed," as compared to parts where there was no sound from speakers. Not only did the number of fish double, but the number of species increased by 50 percent, the researchers added.

"Healthy coral reefs are remarkably noisy places — the crackle of snapping shrimp and the whoops and grunts of fish combine to form a dazzling biological soundscape," one of the study's co-authors, University of Exeter professor Steve Simpson, said. "Juvenile fish home in on these sounds when they're looking for a place to settle."

All parts of the food chain were attracted to the reefs, including herbivores, detritivores, planktivores and predatory piscivores, the researchers found.

"Reefs become ghostly quiet when they are degraded, as the shrimps and fish disappear, but by using loudspeakers to restore this lost soundscape, we can attract young fish back again," Simpson added.

Australian Institute of Marine Science fish biologist Mark Meekan noted that bringing fish won't bring the reef "back to life automatically," but it will aid in recovery, allowing it to be cleaned and "create space for corals to regrow."

One of the study's other co-authors, Andy Radford, noted that "acoustic enrichment" is promising, as it can help bring in different species to maintain a healthy ecosystem, but more efforts are needed for reef conservation and recovery.

"If combined with habitat restoration and other conservation measures, rebuilding fish communities in this manner might accelerate ecosystem recovery," Radford said. "However, we still need to tackle a host of other threats including climate change, overfishing and water pollution in order to protect these fragile ecosystems."