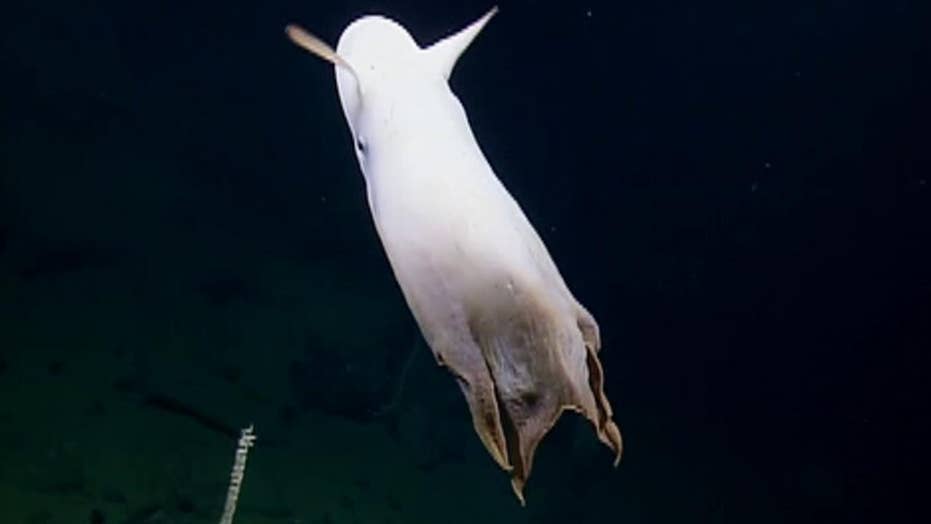 Scientists researching the Davidson Seamount off the coast of California spot a rare Dumbo octopus.

Researchers made an unexpected discovery during a deep dive off the coast of California last week: a translucent cephalopod known as the Dumbo octopus.

Scientists aboard the E/V Nautilus, a roughly 210-foot exploration vessel used for research, were studying an “extinct volcano” – called the Davidson Seamount – to see where coral and sponges exist when they made the stunning discovery, Chad King, the lead scientist on the trip, told Fox News.

King spotted the creature out of the corner of his eye as the team used its remotely operated underwater vehicle Hercules to explore Tuesday.

“Even though I’m a scientist, we’re all kids out here,” he admitted, adding the Dumbo octopus “elated [everyone] in the control area.”

The Dumbo octopus glided and moved its fins in the water before it "gave" researchers a closer peek at its body.

"Oh, it's giving us a show," one person was overheard saying in footage captured of the creature.

The creature they saw was about 23 inches and was gliding at almost 10,870 feet deep, according to the Ocean Exploration Trust, a nonprofit that owns the Nautilus.

"Dumbo elephants," of which there are approximately 17 species, get their nickname because their fins are like the ears the Disney character, the Aquarium of the Pacific explained. The majority of Dumbo octopus species are 7.8 to 12 inches long, the aquarium says, and the biggest Dumbo octopus ever measured was more than 6 feet.

SECRET 'PASSAGE TO THE UNDERWORLD' DISCOVERED BENEATH MEXICAN PYRAMID

King pointed out Dumbo octopuses are not rare, but it's unusual to see them live.

“The fact that we encountered one is what is special,” he said, adding the footage could be useful for octopus experts.

Unfortunately, the exciting encounter had to be cut short.

“We had to move because of the length of the cable and where the ship was,” King explained.

Still, researchers witnessed another amazing find on the same dive.

“We ran into this incredible brooding, or collection, of a different species of octopus, all moms brooding their eggs,” he shared.

The Nautilus expedition is slated to run through Oct. 31.