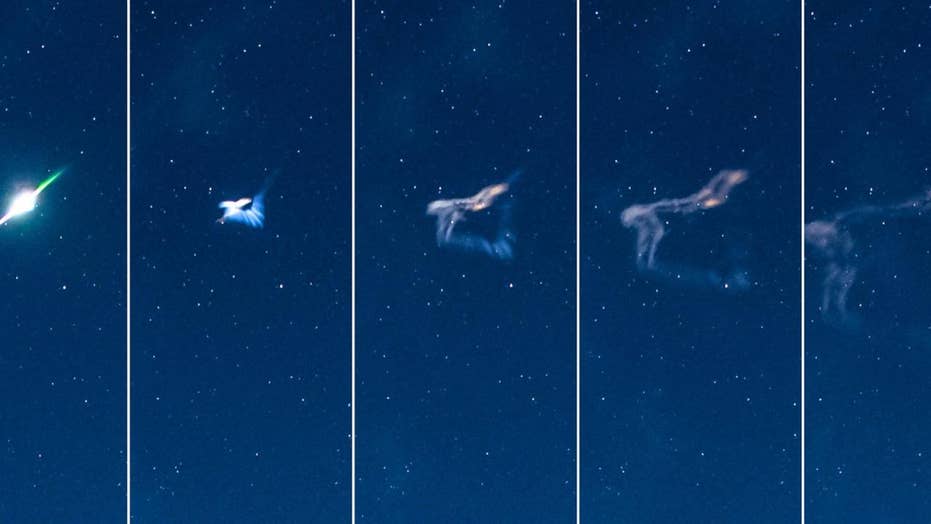 Incredible 'once in a lifetime' video shows a meteor exploding in the sky above a castle in England.

A man in the U.K. managed to capture photos and video of a lifetime, documenting the exact moment when a meteor exploded and then disintegrated above a castle.

The images and video were caught during the Orionid meteor shower on Saturday, Oct. 20, SWNS reports. 44-year-old Nick Jackson was heading to take images of Clun Castle in Shropshire when the celestial object made its debut.

Mid-way during the shoot, Jackson saw the giant meteor behind the castle and said: "I immediately thought, 'I hope that was caught in the frame.'"

COMETS AND ASTEROIDS COULD BE FLINGING LIFE ALL OVER THE UNIVERSE, STUDY FINDS

"It's very unusual to see a meteor that big. Because I was shooting the star trail, I couldn't check the footage immediately," he added.

It was only when he got home did he realize that he was able to capture pictures and video of the remarkable footage.

"It was a sheer stroke of luck that I just happened to be shooting the series of images when it happened," Jackson said. "With things like that, you've got to be in the right place at the right time."

Orionid meteors occur every fall when the Earth is passing through the remnants left by Halley's Comet, SWNS reports. Halley's Comet passes by Earth once every 75 years, the most recent in 1986. It is expected to come back in 2061.

The video is comprised of 30 photos that Jackson took, which show the meteor flying into the frame and then exploding into a ball of light.

MAN USES METEORITE AS DOORSTOP, FINDS OUT IT'S WORTH $100G

Jackson eventually posted the awe-inspiring footage to Facebook and he said it went viral.

"People were saying, 'You're a lucky guy, that's a once-in-a-lifetime thing'," Jackson said. "The reason we photographers go out in the middle of the night and stand there in the freezing cold is because we're obsessed with the beauty of the night sky, its peace and calm. And when you see something like that, it's just awe-inspiring."