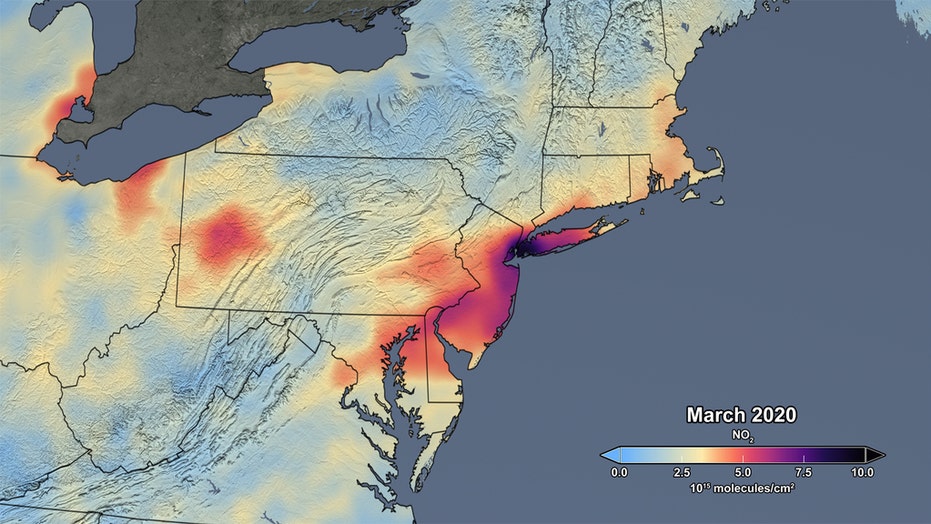 The CDC issues new guidelines on essential workers returning to the job after being exposed to COVID-19 after analyzing the latest data; Jonathan Serrie reports.

NASA satellite data has shown a 30 percent reduction in atmospheric nitrogen dioxide pollution in the northeastern U.S. during the coronavirus lockdown.

The average concentrations of atmospheric nitrogen dioxide were measured by the Ozone Monitoring Instrument on NASA’s Aura satellite during March and compared to the same period in prior years. Nitrogen dioxide, which is mainly emitted from burning fossil fuels and the generation of electricity, is a good indicator of human activity, according to the space agency.

This image released by NASA shows the average concentration of atmospheric nitrogen dioxide measured in March of this year. (NASA/NASA's Scientific Visualization Studio)

NASA adds there are likely differences in nitrogen dioxide levels measured from space and measurements made at ground level. Satellites that measure nitrogen dioxide cannot see through clouds, the space agency explains, adding that its data shows pollution levels for days with low cloudiness.

HOW CORONAVIRUS IS IMPACTING POLLUTION ACROSS THE GLOBE

“In California, the shutdown of businesses and activities related to #COVID19 has led to a decrease in nitrogen dioxide concentration,” NASA tweeted earlier this week.

This image released by NASA shows the average concentration of atmospheric nitrogen dioxide in March of 2015-19. (NASA/NASA's Scientific Visualization Studio)

In the U.K., a recent report by solar power specialists The Eco Experts estimates that the country’s CO2e (carbon dioxide equivalent) emissions are set to drop by 28.22 million tonnes over the 12-week period following the implementation of social distancing measures on March 19.

As of Friday morning, at least 1.6 million coronavirus cases have been diagnosed worldwide, at least 466,299 of which are in the U.S. The disease has accounted for at least 96,787 deaths around the world, including at least 16,686  people in the U.S.