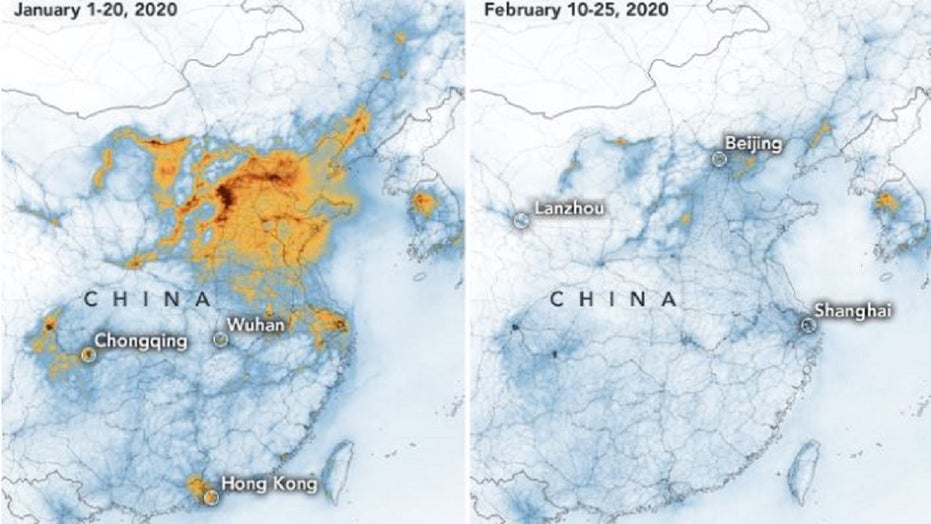 The coronavirus is coinciding with "significant decreases" in nitrogen dioxide over China, according to NASA, as authorities there continue to place more people under quarantines and some businesses remain closed amid the outbreak.

Pollution monitoring satellites operated by NASA and the European Space Agency (ESA) detected the decreases over a two-month span, according to a news release. The drops coincided with the outbreak and the Lunar New Year, which was unusually tame because many decided to stay indoors rather than risk becoming infected.

“This is the first time I have seen such a dramatic drop-off over such a wide area for a specific event,” said Fei Liu, an air quality researcher at NASA’s Goddard Space Flight Center in Maryland.

In January, Chinese authorities locked down several cities and shut down all transportation going into and out of the city of Wuhan, the epicenter of the outbreak.

The pollution reduction is shown in two maps released by the space agencies. The first shows large concentrations of nitrogen dioxide levels over Beijing and near Wuhan from Jan. 1 through 20, before mandated quarantines were issued.

The second is dated from Feb. 10 to 25 in the same area. Almost no nitrogen dioxide is shown.

Additional maps showing Wuhan compared January and February 2019 to the same months this year. Large concentrations of nitrogen dioxide are shown over the city in 2019. Virtually none appears in the updated image.

Barry Lefer, a NASA scientist, said pollution levels usually decrease around the Lunar New Year holiday because many businesses and factories are closed. Levels usually increase after the celebration.

“This year, the reduction rate is more significant than in past years and it has lasted longer,” Liu said. “I am not surprised because many cities nationwide have taken measures to minimize [the] spread of the virus.”