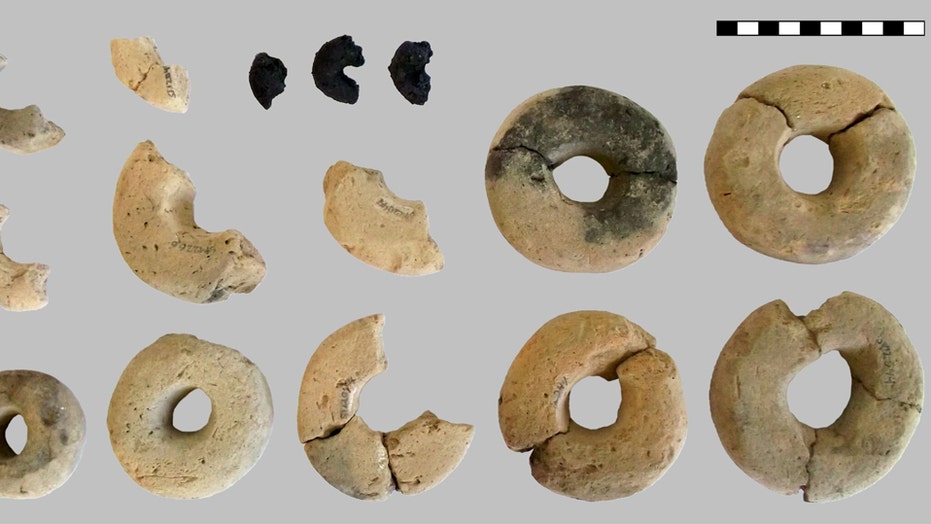 The discovery, made at a burial site in Austria, was found near an area that is believed to have stored cereals. The researchers note that the rings, which are between 2.6 and 3.6 centimeters in diameter, were deliberately put into the storage pit.

The annular objects from the find assemblage in the debris layer of pit V5400. (Credit: Heiss et al, 2019)

"Three incomplete ring-shaped charred organic objects, found together with 14 rings and ring fragments made of clay were discovered in a secondary filled silo pit, excavated among a total of about 100 pits of this kind at the site," the study's abstract reads. "The overall good state of preservation of the organic ring fragments suggests that they were deposited intact on the bottom of the pit and covered well so that no re-deposition or damage occurred."

The study, published in PLOS One, found that the charred remains are cereal products by using light and scanning electron microscopy.

Heiss and his team also found that the cereal was likely made from "from a wet cereal mixture" and had been "subsequently dried without baking."

Cheerios, conversely, are made with oats, according to a YouTube video from the company.

Though the intentional placement of the ring-shaped objects is surprising, researchers have not yet been able to determine what they were used for.

More research is needed to determine whether they were “everyday food” or if they had a symbolic purpose.