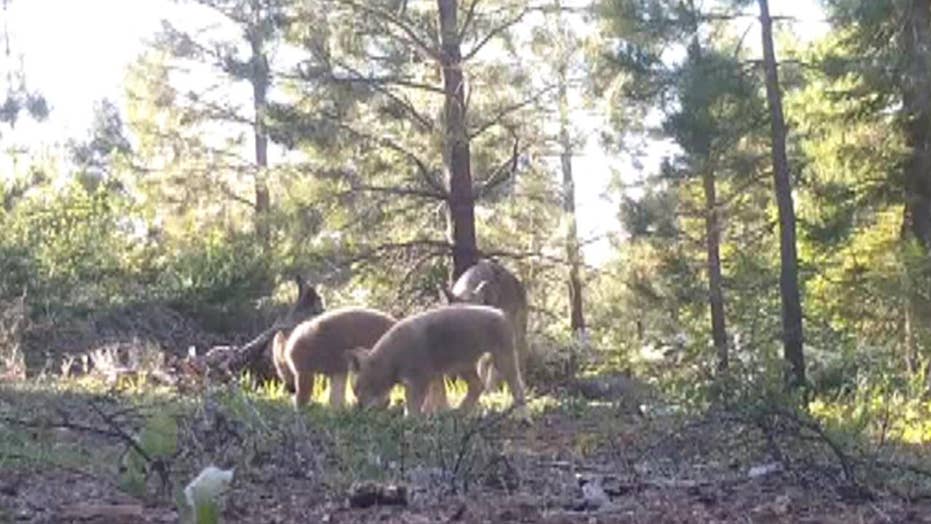 Video: The California Department of Fish and Wildlife spots three new wolf pups in Northern California. The new pups bring the total number of gray wolves to at least seven in the area.

California’s lone wild wolf pack has added at least three new pups, bringing the total number of gray wolves in the state to at least seven after the species was wiped out in the 1920s, wildlife officials said.

The pups were born in April to the Lassen Pack, a group of two to three adult wolves known to roam Lassen County in northeast California, about 100 miles south of the Oregon border, the California Department of Fish and Wildlife (CDFW) said in a quarterly report.

A trail camera recorded video of the three pups and two adult wolves on June 18 as the pack traveled through a remote wooded area. The pups can be heard yipping and howling as they make a brief stop on the trail.

Amaroq Weiss, who advocates for West Coast wolves with the Center for Biological Diversity, says that the return of wolves to the state is an important development for conservation efforts. (California Department of Fish and Wildlife via AP)

The gray wolf is a native species to California that roamed much of the West before they were driven to the point of extinction in the state during the 1920s, according to the CDFW.

Farmers and trappers likely killed the wolves to protect their livestock and prevent the animals from killing the elk and deer that humans would hunt, the San Jose Mercury News reported.

Almost a century later, gray wolves have begun returning to California on their own from other states, according to the CDFW. In 2011, a gray wolf with a radio collar named OR-7 crossed the border from Oregon and became the first wolf in the state since 1924.

Gray wolves are listed as endangered and protected in California under both state and federal Endangered Species Acts.