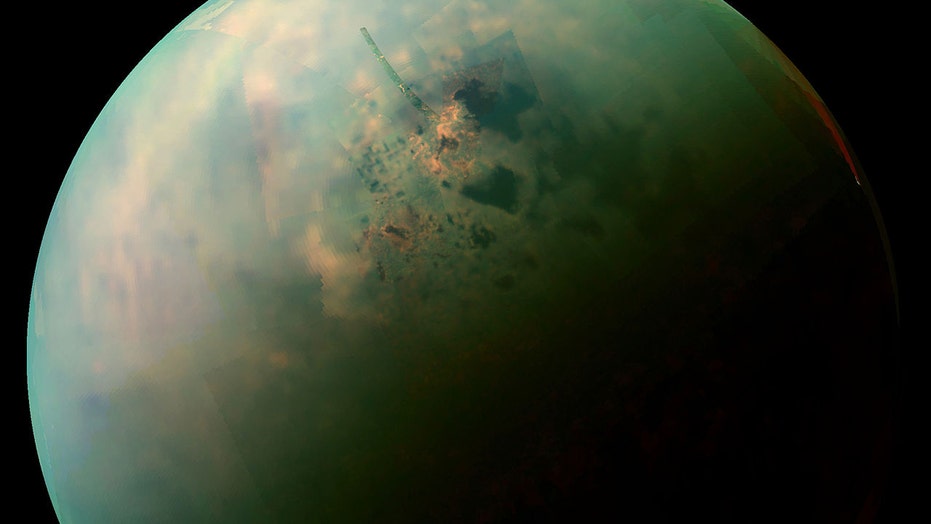 Saturn's moon Titan has fascinated scientists as it contains lakes that have similar features to those on Earth and is the only other celestial object in the solar system to have surface liquid.

In areas of the moon where the liquid has evaporated, dark smears have been spotted, which researchers believe operate in a similar fashion to “bathtub rings” — and they might be made of "alien crystals."

The study proposing the theory is the work of researchers at NASA's Jet Propulsion Laboratory and was published in American Geophysical Union and presented at the 2019 Astrobiology Science Conference. The scientists put methane, ethane and "other carbon-containing molecules" into a chamber with bone-crunchingly cold temperatures to replicate the conditions on Titan.

A false-color, near infrared view of Titan’s northern hemisphere collected by NASA’s Cassini spacecraft showing the moon’s seas and lakes. Orange areas near some of them may be deposits of organic evaporite minerals left behind by receding liquid hydrocarbon. (Credit: NASA / JPL-Caltech / Space Science Institute)

Eventually, the researchers discovered new compounds and minerals not seen on Earth, including a "co-crystal made of solid acetylene and butane," according to a statement.

It's possible the crystal made up of acetylene and butane is common on Titan, the researchers added in the statement, given what's currently known about the moon.

"This most recent one is probably much more abundant on Titan's surface, as both acetylene and butane are believed to be very common there," the researchers added in the abstract. "In particular, we think the 'bathtub rings' around Titan's lakes might be made up of this material, because acetylene and butane both dissolve well in liquid methane and ethane compared to other molecules."

“We don’t know yet if we have these bathtub rings,” said the study's lead author and NASA JPL researcher Morgan Cable, in the statement. “It’s hard to see through Titan’s hazy atmosphere.”

The researchers said further study of Titan is needed to determine whether the rings are actually there, needing a spacecraft to inspect the lakes more closely.

In recent months, new observations of Saturn and Titan have been made, including the aforementioned fresh rainfall, which caused a reflective feature near the north pole of the moon. Dust storms were also spotted on Titan for the first time ever, raising the prospect the storms could be a precursor to alien life on the celestial body.

In 2017, after spending 13 years studying the planet, Cassini intentionally plunged into Saturn's atmosphere in September 2017.