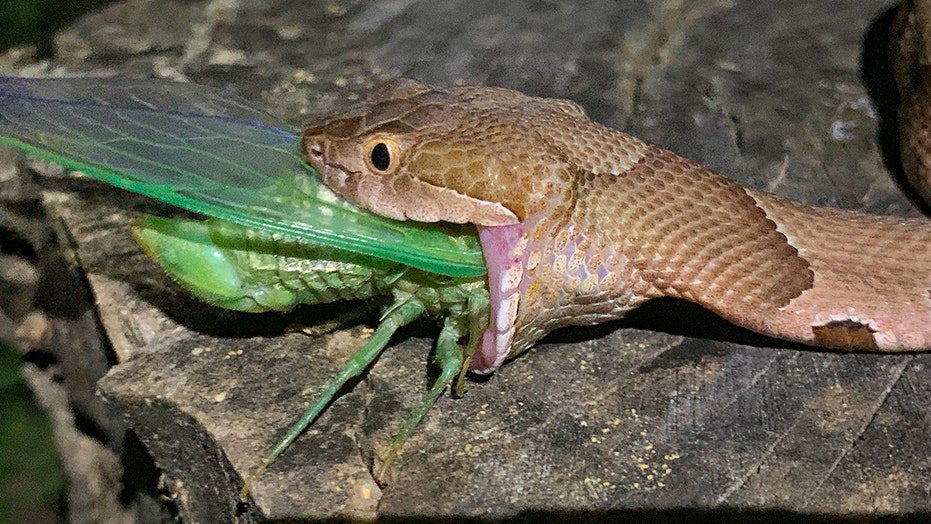 Life is short, but especially so for one bug.

An Arkansas photographer captured a venomous copperhead snake devouring a cicada that had just emerged from its shell at Ozark National Forest earlier this month.

Charlton McDaniel had been in the forest to kayak under the moonlight on July 17 when he said he noticed a molting cicada on a tree stump. He took out his camera to capture the moment the insect would emerge from its outer shell -- but a copperhead slithered along and interrupted the photo shoot, he wrote on Facebook.

The snake crept up on the cicada on a tree stump. (Charlton McDaniel via AP)

McDaniel said he twice scared off the intruding reptile, but the hungry snake kept returning until it grabbed the cicada on the third attempt.

McDaniel scared off a nearby snake, but the reptile returned to gobble the insect. (Charlton McDaniel via AP)

The 42-year-old said the encounter “fascinated and captivated” him. Several photos showed the snake unhinge its jaw to gobble up the bug.

The copperhead finished swallowing the insect and then slithered off into the forest. (Charlton McDaniel via AP)

"I got really close, less than a foot, with my iPhone once it started eating it," he told the Springfield News-Leader. "I knew that while it was swallowing it was really vulnerable and couldn't bite me."

Once the copperhead became aware it wasn’t alone, the animal finished swallowing its meal and slipped back into the forest, McDaniel said.