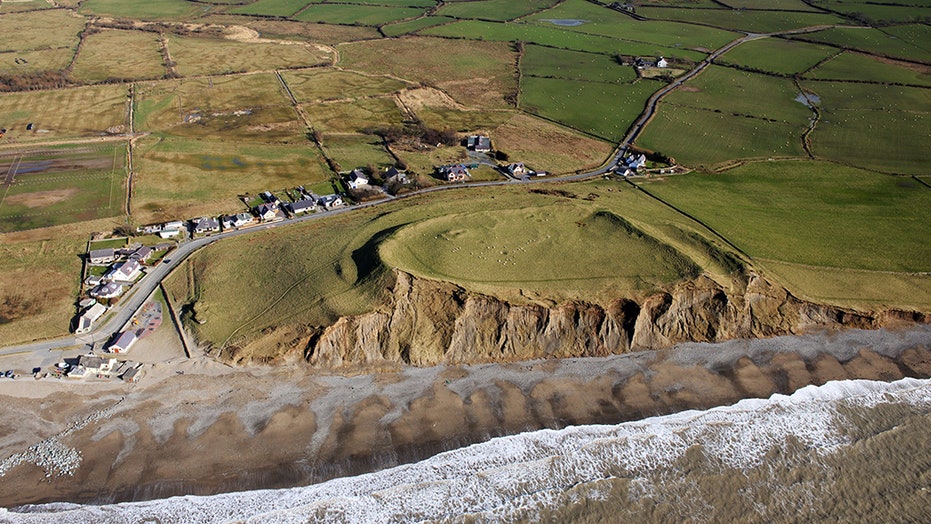 Archaeologists in the U.K. are working to uncover the secrets of an ancient coastal hillfort before it falls into the sea.

Perched on a slowly collapsing cliff edge, the mysterious fort at Dinas Dinlle in Wales is believed to date back to the Iron Age, which began 800 B.C. in Britain. The fort’s western rampart is already falling victim to coastal erosion and experts are working to record as many details of the site as they can.

Toby Driver, Ph.D., senior investigator for the Royal Commission on the Ancient and Historical Monuments of Wales (RCAHMW) told Fox News about the fascinating structure.

“An Iron Age roundhouse around 13m [42.7 feet] diameter – one of the largest stone roundhouses we have seen – has been unearthed in one of the trenches closest to the eroding cliff edge,” he explained, via an email. “This is an unexpected prehistoric building of fantastic build quality. With coastal erosion increasing it may only have another 50 years or so before it reaches the cliff edge.”

The roundhouse is believed to have become covered in coastal sand during a sandstorm in 1330 A.D., the BBC reports.

The fort at Dinas Dinlle on the Welsh coast. (CHERISH Project)

Archaeologists and geographers from the Royal Commission and Wales’ Aberystwyth University have been investigating the site, even using climbing gear to carefully study the cliff face.

Driver told Fox News that excavations are funded by the CHERISH project, which is investigating climate change and coastal heritage in Ireland and Wales.

“Investigations will continue throughout the project to monitor how much is being lost to the sea – and to the increasing effects of climate change on the monument - using techniques such as excavation, laser scanning and UAV [drone] surveying,” explained the CHERISH project, in a statement provided to Fox News.

Owned by the U.K.’s National Trust, Dinas Dinlle is designated a monument by Cadw, the Welsh government’s historic environment service.

Wales continues to reveal new aspects of its rich history. A student taking part in his first-ever archaeological dig, for example, recently discovered an incredible ax dating back to the 'New Stone Age' at Talsarn in Wales.

Experts have also been unlocking new details of a Roman villa at Abermagwr in west Wales.

The wall of the Iron Age roundhouse at Dinas Dinlle. (CHERISH Project)

In 2017 archaeologists discovered a Bronze Age cemetery at a ritual site on the Welsh island of Anglesey.

An aerial image of Dinas Dinlle captured by drone.

A strange prehistoric forest was recently revealed on a Welsh beach in the aftermath of Storm Hannah.