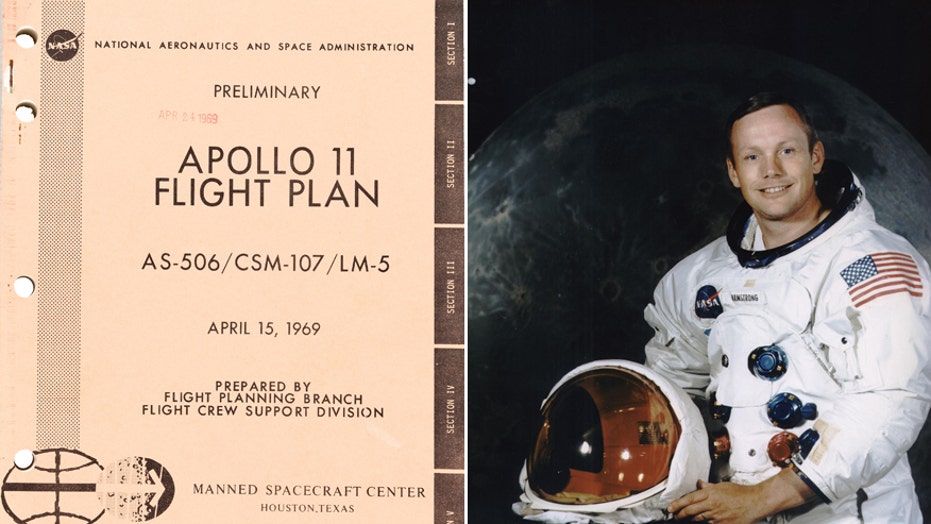 A preliminary flight plan and a NASA memo discussing Neil Armstrong’s historic first words on the Moon are among a host of artifacts from the historic Apollo 11 mission that are up for auction next month.

The artifacts are part of an auction of Neil Armstrong’s personal collection and archive that will be held from July 16 to 18 by Dallas-based Heritage Auctions.  The artifacts in the auction are from the Armstrong Family Collection.

A three-sheet internal NASA memo discusses the issue of whether Armstrong should be coached on what to say during his famous first steps on the lunar surface. In the letter, Julian Scheer, NASA’s assistant administrator for public affairs, argues that the Apollo 11 commander should not be coached. “The truest emotion at the historic moment is what the explorer feels within himself not for the astronauts be coached before they leave or to carry a prepared text in their hip pockets,” he wrote.

“There may be some who are concerned that some dramatic utterance may not be emitted by the first astronaut who touches the lunar surface. I don’t share that concern,” Scheer adds. “Others believe a poet ought to go the Moon. Columbus wasn’t a poet and he didn’t have a prepared text, but his words were pretty dramatic to me. When he saw the Canary Islands he wrote, ‘I landed and saw people running around naked, some very green trees, much water, and many fruits’.”

The Apollo 11 preliminary flight plan that is up for auction.

In the memo, Scheer also cites the words of Capt. James Cook, Meriweather Lewis and polar explorer Robert Peary. It has a pre-sale estimate of $15,000.

Armstrong’s personal copy of the Apollo 11 preliminary flight plan will also be auctioned next month. The plan consists of 134 pages of crew activities, planned minute by minute, according to Heritage Auctions. The flight plan has a pre-sale estimate of $6,000.

Other items in the auction include an Apollo-era flight suit that was worn by Armstrong, a piece of the Apollo 11 heatshield, and even a toy teddy bear from the moonwalker’s childhood. The items have pre-sale estimates of $40,000, $8,000 and $3,000, respectively.

Neil Armstrong's childhood teddy bear is among the items up for auction. (Heritage Auctions)

The historic mission continues to be a source of fascination. A rare signed photo of Apollo 11 astronaut Armstrong making his ‘giant leap for mankind,’ for example, was recently sold in a separate auction for $52,247.

Last year, a checklist that traveled to the surface of the Moon with Armstrong and Aldrin sold at auction in New York for $62,500.

In 2017, a bag containing Moon dust filled by Armstrong was sold by Sotheby’s for $1.8 million.

An ablative plug from the Apollo 11 heatshield that is up for auction. (Heritage Auctions)