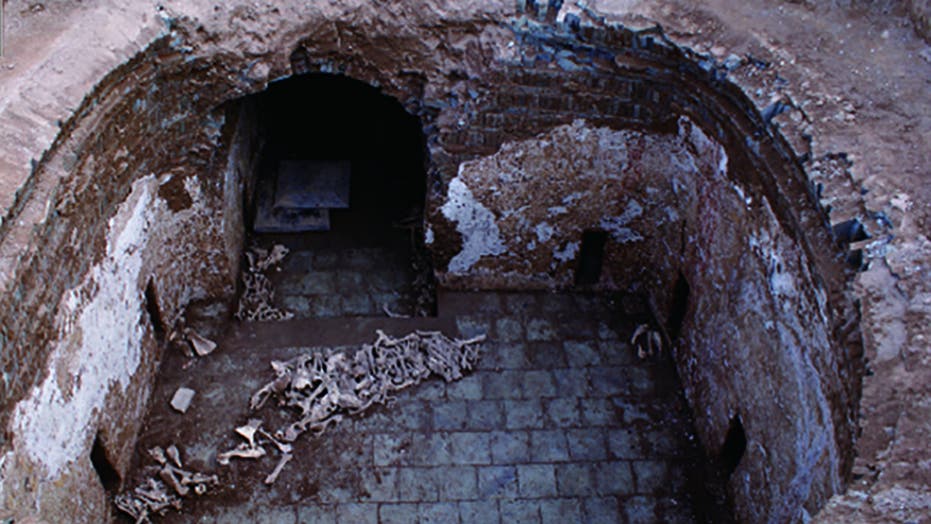 An ancient Chinese noblewoman has been discovered buried in a grave with the donkeys she used for playing polo more than 1,000 years ago.

The donkey bones were discovered in the tomb of Cui Shi, an Imperial noblewoman who died in 878 A.D. in Xi'an in northwestern China.

Experts were surprised to find that “work animals” were buried with the noblewoman.

"Donkeys were the first pack animal, the steam engines of their day in Africa and western Eurasia, but we know almost nothing about their use in eastern Asia," said Fiona Marshall, an archaeologist in the Department of Anthropology at Washington University in St. Louis, who helped study the animal bones, in a statement.

"Donkey skeletons just have not been found -- this is probably because they died along trade routes and were not preserved," Marshall added. "The donkeys buried in the Tang Dynasty noble tomb in Xian provided a first opportunity -- and a very rare one -- to understand donkeys' roles in east Asian societies."

A paper on the discovery has been published in the journal Antiquity.

"There was no reason for a lady such as Cui Shi to use a donkey, let alone sacrifice it for her afterlife," said lead author Songmei Hu, from the Shaanxi Academy of Archaeology, in the statement. "This is the first time such a burial has been found."

A skull from one of Cui Shu’s donkeys. (Credit: S. Hu/Antiquity Publications Ltd.)

Polo was popular in Tang Dynasty China, which lasted from A.D. 618 to 907. Researchers note that the game was deemed dangerous when played on large horses, with one emperor even killed playing polo. “As such, some nobles preferred to play Lvju, or donkey polo,” they said in the statement. “Although both forms of polo are mentioned in the historical literature, horse polo is the only form depicted in art and artifacts.”

Radiocarbon dating was used to analyze the donkey bones found in the tomb of Cui Shi, indicating that the animals were used to play Lvju. “Given that animals were typically included in burials for use in the afterlife, the donkeys' presence with Cui Shi allowed the researchers to conclude that she wanted to keep playing her favorite sport after death,” they said in the statement.

China continues to reveal new aspects of its rich history. In 2018, for example, scientists studying bones unearthed from an ancient tomb in China’s Shaanxi Province discovered the remains of a new but totally extinct species of ape.

The experts, who were led by the Zoological Society of London, made the incredible find in a 2,300-year-old burial chamber. The tomb may have belonged to Lady Xia, the grandmother of China’s first emperor Qin Shihuang, who oversaw the construction of the Great Wall of China and the famous Terracotta Army.

Also in 2018, an international team of experts identified sophisticated stone implements in a cave in Southern China, which they describe as the “Swiss Army knife of prehistoric tools.”

Other recent archaeological finds in China include the discovery of a 900-year-old preserved skeleton dubbed the “Grand Lady.”

In 2016, archaeologists found evidence that ancient Greeks may have helped design the famous Terracotta Army, which could shed new light on China’s early contact with the West.