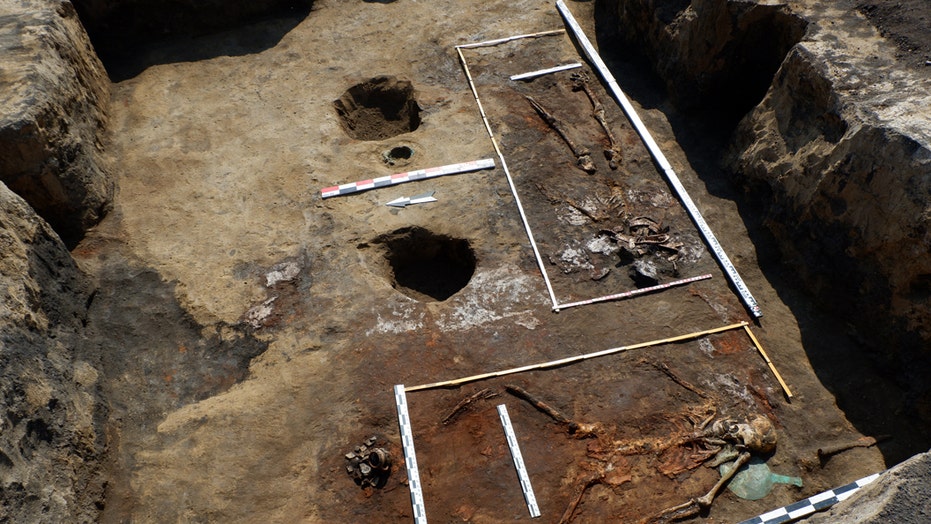 The remains of four ancient warrior women were recently discovered in Russia, marking the first time ever Scythian fighting females have been found in the same tomb.

According to Russia’s RAS Institute of Archaeology, one of the Amazons was found for the first time wearing a rare ceremonial headdress. The Scythians were tribes of nomadic warriors who moved around Siberia between 200 and 900 B.C.

Amazons, originally a Greek term for warrior women, are widely acknowledged to have been a common part of the Scythian culture. In the past 10 years, the expedition has uncovered 11 of their graves. The four women found in the most recent discovery are believed to have served as guardians of camp while the tribesmen were out on the warpath.

General view of the cemetery. (Credit: Institute of Archaeology RAS)

“Female warriors are referred to by several classical sources, one saying that among some groups females weren’t allowed to marry until they had killed an enemy in battle,” Sir Barry Cunliffe, emeritus professor of European Archaeology at Oxford and author of "The Scythians: Nomad Warriors of the Steppe," told Fox News. “It is clear from other references that gender fluidity was a feature of some Scythian societies, [and] it’s a subject that needs to be researched further - this discovery will help to advance knowledge.”

The women — estimated to have been buried sometime during the 4th century B.C. — were discovered in the Cemetery Devitsa, named after the local village. The cemetery has been studied by Russian archaeologists in the Don Expedition since 2010 and is located in a plowed field. In the middle of the cemetery was a three-foot-tall, 120-foot-round hill and under that mound, the researchers, led by Valerii Guliaev, located the tomb, which had been covered in oak blocks.

The women’s ages varied, the youngest estimated between 12 and 13. One was aged 20-29 years and another 25-35, while the oldest was between 45 and 50 when she died. The oldest had been apparently living on borrowed time as the life expectancy of these nomadic Scythian fighting females was 30-35, according to a press release. Her skull wore the aforementioned headdress (or “calathos”), which was decorated with floral ornaments and pendants made of 65 percent to 70 percent gold along with copper, silver and iron.

A fabric-wrapped iron knife and arrowhead were also discovered next to her remains.

Two of the skeletons were found undisturbed at the southern and western wall of the tomb, laying on grass-covered wooden beds. One of the women was in the “position of a horseman," the tendons of her legs had been cut, and under her left shoulder was a bronze mirror. Two spears lay on her right, and at her legs were a molded dish and black lacquer one-armed drinking cup. Another woman and the female believed to be between 12 and 13 had horse harnesses, iron arrowheads, knives, and hooks, as well as molded vessels and animal bones.

At some point in time, the tomb had been robbed. Luckily, only the northern and eastern parts had been hit.

Cunliffe believes this new discovery will give archaeologists a great opportunity to carry out a minute study of an elite family group, something that wasn’t possible when Scythian tombs were first unearthed many years ago.

Details of calathos in situ. (Credit: Institute of Archaeology RAS)

“Perhaps the most important thing about the recent discovery is that it gives archaeologists a chance to bring a whole range of forensic techniques to bear on the remains," he said. "Analysis of the organic remains that might have survived (fabrics, plant remains, parasites), stable isotope studies of teeth (showing patterns of movement of the people since childhood), and ancient DNA studies which should show the family relationships of those who were buried.”

“They could also be studied for disease, trauma, etc.," Cunliffe continued. "So many of the elite Scythian burials were dug up in the past when, to say the least, archaeological techniques were much less refined!"