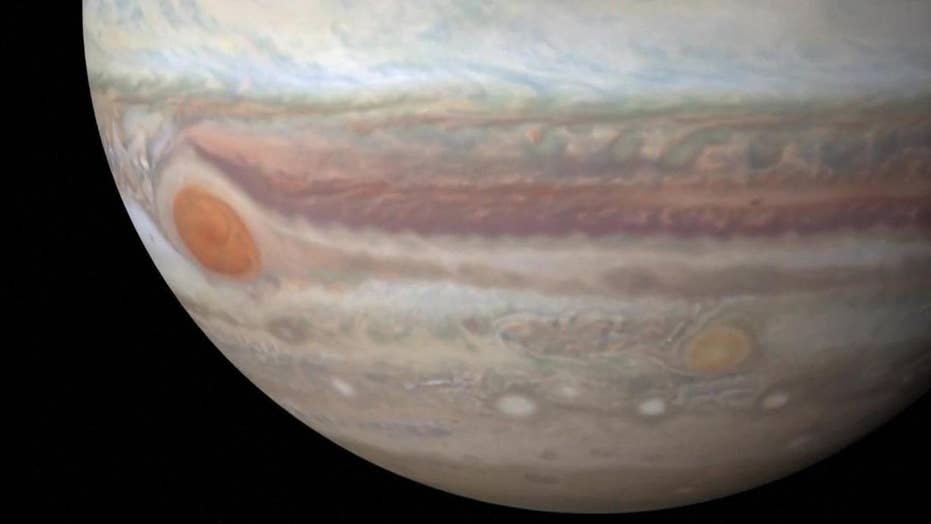 Using two sophisticated telescopes scientists uncovered that there is water in Jupiter’s Great Red Spot. This means the possibility of life ‘cannot be completely ruled out,’ according to researchers.

In a stunning scientific discovery, researchers have found water clouds inside Jupiter's Great Red Spot, raising the prospect that life may exist on the planet.

Jupiter's Great Red Spot, a storm that has been continuously observed since 1830, still remains a mystery to NASA and much of the scientific community, but the discovery of water clouds may lead to a greater understanding of the planet, its atmosphere and whether it ever held life, Clemson University astrophysicist Máté Ádámkovics said.

“Water may play a critical role in Jupiter’s dynamic weather patterns, so this will help advance our understanding of what makes the planet’s atmosphere so turbulent," Ádámkovics said in a statement.

INCREDIBLE HULK? NAH, THIS GROWING GREEN LIGHT IN THE NIGHT SKY IS A COMET

Ádámkovics was quick to caution that, while the presence of water on the solar system's largest planet is promising, it does not mean it is a precursor for life. "And, finally, where there’s the potential for liquid water, the possibility of life cannot be completely ruled out. So, though it appears very unlikely, life on Jupiter is not beyond the range of our imaginations,” he added.

In the past, NASA has said that the planet's "environment is probably not conducive to life as we know it," but did add that one of its larger moons, Europa, is "one of the likeliest places to find life elsewhere in our solar system."

The research team used the iSHELL on the NASA Infrared Telescope Facility and the Near Infrared Spectograph on the Keck 2 telescope to find the water, utilizing radiation data collected from the instruments.

The level of water on the planet is somewhat surprising, though perhaps not overly, considering the size of Jupiter. Ádámkovics noted that “Jupiter is a gas giant that contains more than twice the mass of all of our other planets combined," so when combined with the fact its atmosphere is a mixture of hydrogen and helium, it has "many times more water than we have here on Earth.”

In addition, Jupiter has 79 moons mostly comprised of ice, including the aforementioned Europa and Ganymede, where scientists recently discovered “extraordinary” electromagnetic waves, known as “chorus waves,” emanating from the satellite.

Eventually, researchers hope to learn how much water is on the planet and what role it plays, outside of the potential for being crucial to life.

“Water may play a critical role in Jupiter’s dynamic weather patterns, so this will help advance our understanding of what makes the planet’s atmosphere so turbulent," Ádámkovics added.

The team at Clemson used specially designed software to take the data they were being given, said undergraduate student Rachel Conway, who is involved in the university's Creative Inquiry program.

“When I initially began, I started by running the data through. The code was already written and I was just plugging in new data sets and generating output files,” said. “But then I began fixing errors and learning more about what was actually going on. I’m interested in everything and anything that’s out there, so learning more about what we don’t know is always cool.”

In the fall, the project will move from analyzing just the Great Red Spot – large enough to contain two or three Earths – and move on to the entire planet, Ádámkovics said.

The study has been published in the Astronomical Journal.