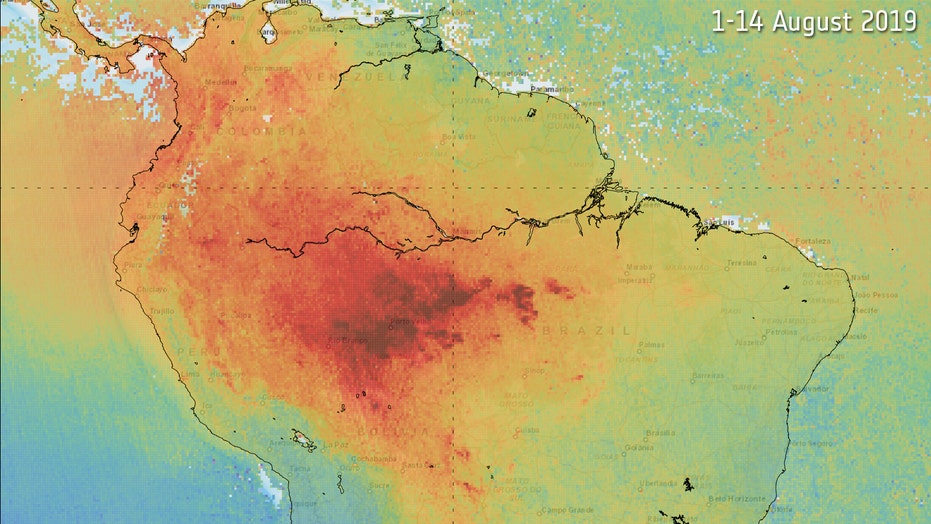 Destructive blazes in the Amazon rainforest are spewing a toxic brew into the air and causing a spike in air pollution, new satellite images from the European Space Agency show.

The ESA images, released on Monday, show an increase in pollutants like carbon monoxide, formaldehyde and aerosols, as the number of fires has also grown.

According to Brazil's National Institute for Space Research, the number of fires has soared past 100,000, which is a 45 percent increase from this same time last year.

Using data from Copernicus Sentinel-5P, the image shows the difference in carbon monoxide in the air between July 2019 and August 2019 over the Amazon. (European Space Agency)

The raging fires, which are visible from space, have been burning through the extremely biodiverse region for more than a month.

"It's a catastrophe of huge proportions," Dr. Deby Cassill, an associate professor in USF's Department of Biological Sciences, told Fox 13.

Environmental groups have said the blazes are also negatively impacting the climate.

"In addition to increasing emissions, deforestation contributes directly to a change in rainfall patterns in the affected region, extending the length of the dry season, further affecting forests, biodiversity, agriculture and human health," Greenpeace said in a statement.