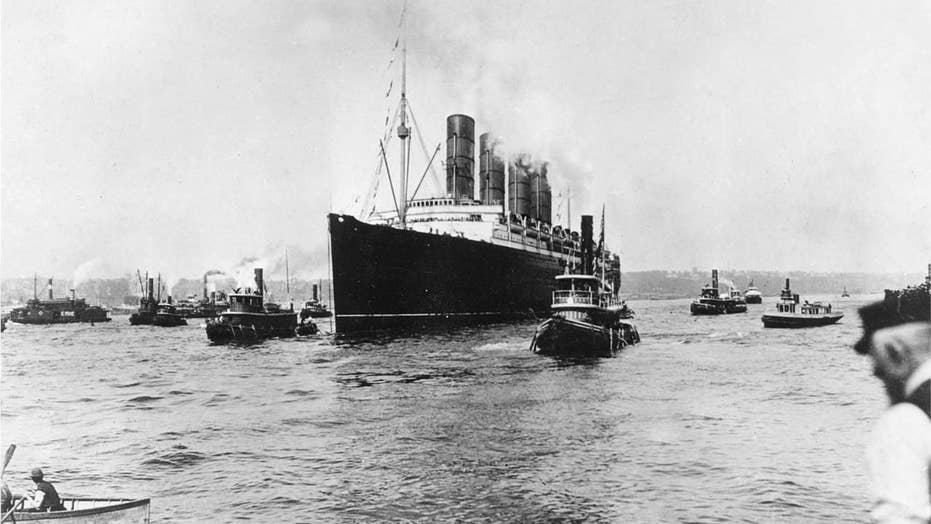 Unusual item from the doomed Lusitania has been discovered

A century after the Lusitania was sunk by a U-boat, an extremely rare hardtack ship's biscuit has been found and is up for auction.

In May 1915, the British ocean liner Lusitania was torpedoed and sunk by a German U-boat, resulting in the loss of more than 1,100 lives, The attack on the civilian vessel sent shockwaves around the world.

Now, almost 104 years after the deadly torpedo attack, an extremely rare hardtack ship’s biscuit from one of the ship’s lifeboats is up for auction in the U.K. Made from flour, salt and water, cracker-like hardtack biscuits are designed to be long-lasting, and have historically been a feature of long sea voyages and military campaigns.

The biscuit will be auctioned by Henry Aldridge and Son on April 27. Auctioneer Andrew Aldridge told Fox News that the biscuit comes with a letter written by a British soldier in the Royal Engineers explaining how he obtained the unusual item.

The soldier got the biscuit from one of Lusitania’s lifeboats when the liner’s survivors reached Queenstown (now called Cobh) in Ireland.

“I suppose these biscuits are put in the lifeboats to feed the people aboard her, in case they are a great distance from land or being adrift for many days,” the soldier wrote. “In these boats at Queenstown they found brooches, rings, watches & chains belonging to the survivors. There are also a great many life belts that the survivors wore. I have been in the boats and they hold something like fifty persons.”

The hardtack biscuit was recovered from one of Lusitania's lifeboats. (Henry Aldridge and Son)

“It is believed that there are only two such biscuits in existence,” Aldridge told Fox News, via email, adding that the other biscuit is on display at an Irish museum.

Lusitania was traveling from New York to Liverpool when she was sunk by U-boat U-20 off the coast of Ireland on May 7, 1915. Some 1,198 of the ship’s almost 2,000 passengers and crew died in the attack. More than 100 Americans lost their lives when Lusitania sank and the incident is cited as a contributory factor in America’s decision to abandon its position of neutrality and join World War I in 1917.

File photo - The first page of the Daily Mirror of May 8, 1915 with the news of the sinking of the English steamship Lusitania. (Photo by DeAgostini/Getty Images)

Germany said that it had warned ships not to enter the war zone around Britain and also cited the fact that Lusitania was carrying 173 tons of war munitions to Britain as justification for the attack, according to History.com.

The hardtack ship's biscuit and the letter describing its discovery. (Henry Aldridge and Son)

Queenstown was also the last port of call for Titanic on its fateful maiden voyage. The ill-fated liner picked up passengers in the Irish port just two days before she sank after striking an iceberg on April 14, 1912.