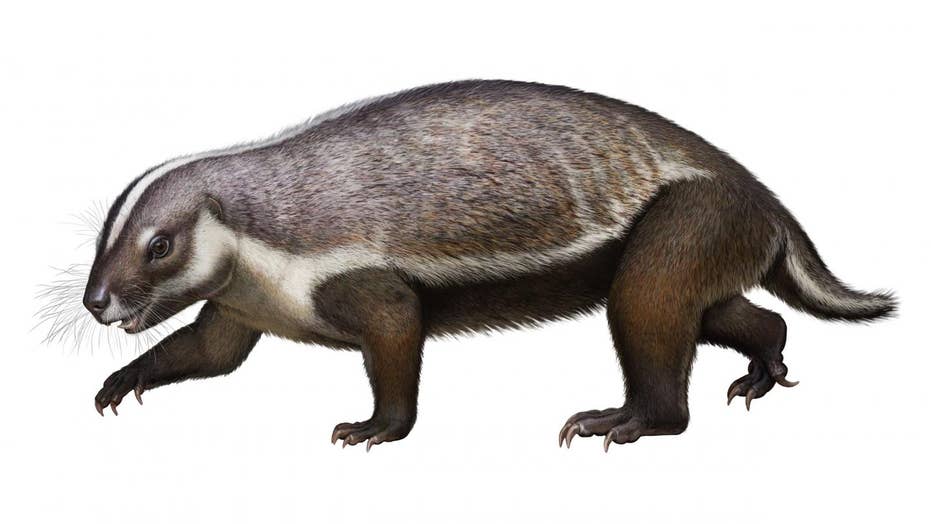 During the age of the dinosaurs, the planet looked very different than it does today, with supercontinents reigning supreme and bizarre-looking creatures walking the Earth. Now, researchers have discovered a 66-million-year-old fossil of the world's oldest mammal, for which there aren't "any real parallels."

Known as Adalatherium (which means "crazy beast"), the fossils of the strange-looking creature were discovered on the northwestern part of Madagascar, which was part of the Gondwana supercontinent millions of years ago. Adalatherium, which comes from a group of mammals known as Gondwanatherians, had strange teeth, an odd body and odd holes in its skull, researchers found.

"When Dr. [David] Krause showed it to me in a scientific meeting and asked me for my opinion, I said I had never seen anything like this," one of the study's co-authors, Guillermo Rougier, said in a statement. "This mammal has teeth for which we have no parallel."

The image was drawn from a complete, 3-dimensional fossil discovered in Madagascar. The unusually large mammal, named Adalatherium, is part of a group of mammals known as gondwanatherians. It lived at the time of dinosaurs, roughly 66 million years ago. (Credit: Denver Museum of Nature &amp; Science/Andrey Atuchin)

Adalatherium was first discovered in 1999 and, since then, the researchers have been analyzing the well-preserved skeleton, as only pieces of the hips and the back of the skull were found.

The fossil is remarkably complete, an extremely rare find for ancient mammals that lived alongside the dinosaurs. Rougier described the creature as very roughly resembling a beaver or a small capybara.

"First, it is surprising how complete it is," Rougier said. "Second, this fossil is preserved in three dimensions. When you have an animal that dies and is preserved in the rocks, the weight of the rocks on top of it flattens it out. Often it looks like a steam roller ran over it. So you might have a complete skeleton but it will be the thickness of a piece of paper - all splat out. This animal was preserved in 3-D so this gives us a wealth of detail that we very rarely have in other specimens."

Adalatherium's bizarre form, with its back legs sprawled and front legs under its body similar to a dog or cat, may have stemmed from the fact that Madagascar is an isolated island, researchers believe.

THIS PRIMEVAL WORM MAY BE THE ANCESTOR OF ALL ANIMALS

"Adalatherium is a product of this time of isolation when Madagascar was an island, detached from India and shifting towards Africa, but before there was any African influence," Rougier explained. "So it was basically an experiment, an example of what we call island biogeography or island evolution.

"Long isolated places produce very unique results in biology," Rougier continued. "These fossils keep reminding us of the unexpected forms and shapes that evolution can take over long periods of time in an isolated place. Adalatherium is an animal for which we don't have any real parallels."

The island broke off from India and never quite reached Africa during its journey over a period of 100 million years.

The research is published in the scientific journal Nature.