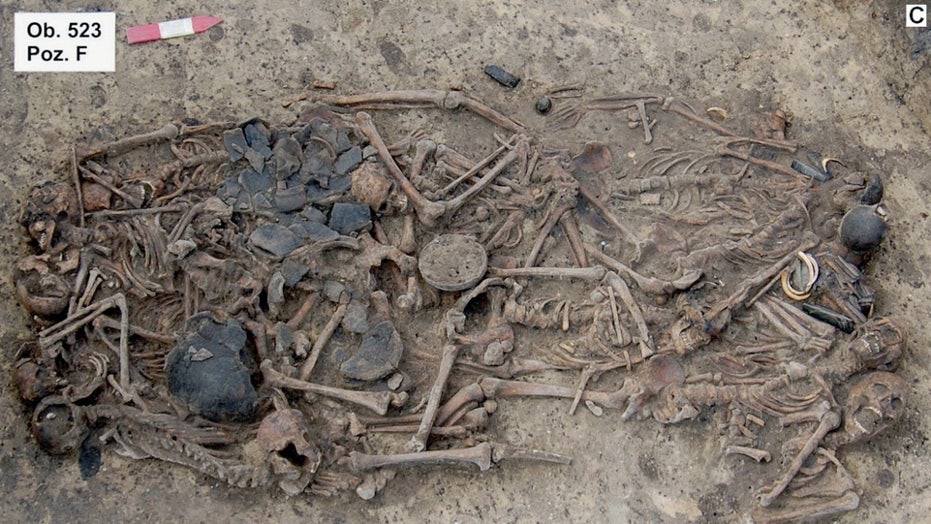 It may be one of the oldest cold cases, ever.

A group of 15 people discovered in a Bronze Age mass grave in southern Poland was killed by blows to the head, and their bodies were buried together in a unique way, but researchers have recently realized through genetic evidence that the individuals were members of the same extended family.

The 5,000-year-old mass grave in southern Poland was first unearthed in 2011 and contained the remains of 15 men, women and children, and some other burial items.

All of the skeletons showed severe cranial trauma, but the exact reason for the killings remains a mystery, with archaeologists at the time theorizing that the group was murdered during a raid on their settlement.

NEW AMAZON MACHINES CAN PACK 600 ORDERS PER HOUR, COULD REPLACE THOUSANDS OF JOBS

An international team of researchers conducted a genetic analysis on the remains. The results, which were published last week, suggest the close relationship between all but one of the individuals and that the bodies were arranged in the grave according to their kin relationships.

The above artist’s reconstruction of the grave shows how the bodies were positioned. (Illustration: Michał Podsiadło)

The study found that all of the skulls showed fatal cranial fractures. However, there were no defensive wounds detected, which would suggest that these people were captured and then summarily executed, according to the study.

“We know from other gravesite discoveries that violent conflicts played out among different cultural groups at this time,” archaeologist Niels Johannsen of Aarhus University said in a University of Copenhagen press release. “However, they have never been as clearly documented as here. All the violence and tragedy aside, our study clearly demonstrates that family unity and care meant a lot for these people, some 5,000 years ago, both in life and in death.”

Whatever led to these brutal killings, researchers were clear about the power of family bonds — even after death.

"By analyzing ancient DNA from the skeletons, we were able to map each of the family relationships. We can see that mothers are laid next to their children and brothers side-by-side. Those who buried the dead knew them well. We also see that most of the fathers from this extended family are absent from the grave. Our suggestion is that they weren't at the settlement when the massacre occurred and that they returned later, and subsequently buried their families in a respectful way,” evolutionary biologist Morten Allentoft of the University of Copenhagen said in a statement.

The study's results were published in the Proceedings of the National Academy of Sciences of the United States of America.