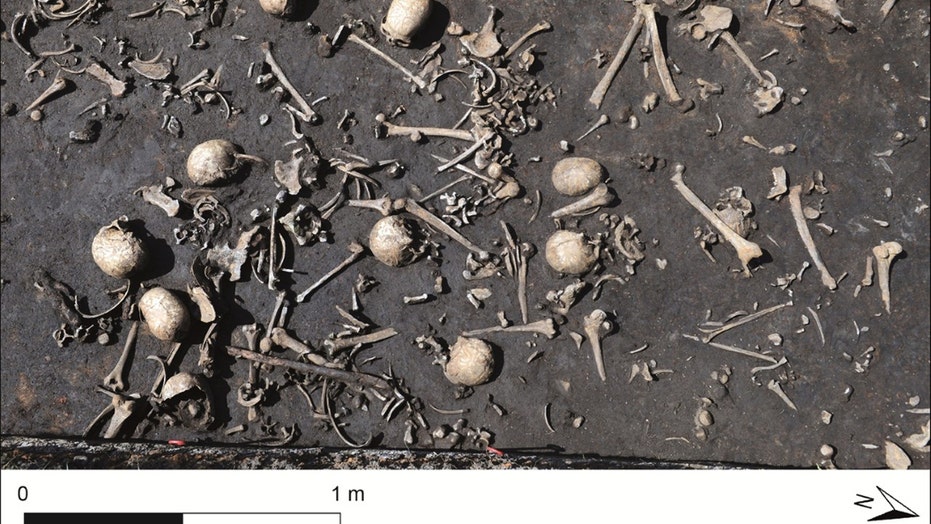 Thousands of years ago, two massive armies fought at the Tollense River Valley in north Germany, not far from the Baltic Sea. During the battle, a soldier who had trekked all the way from southcentral Europe was killed, his body falling into the river. Now, a new study highlights that the soldier’s belongings were discovered resting eight feet down on the bottom of the river, perfectly preserved in the mud.

A scuba diving archaeological team found the objects —  a collection of bronze tools, cylinders and scraps —  among the bones of 140 warriors while exploring a new area of the river back in 2016.

“Our ‘diving heroes’ documented a considerable number of human bones and Bronze finds on the ground of the river in their original position,” Thomas Terberger, of the Lower Saxony State Office for Cultural Heritage in Hanover and co-author of the study, told Fox News. “This made it possible to better understand the context of the finds- we can see there that the human bones are directly associated with arrowheads, three dress pins, bronze tools, a valuable belt box and the scrap metal find, which we can interpret as the belonging of a warrior.”

ANCIENT BRITONS HAD GIANT WORMS IN THEIR KIDNEYS, STUDY SHOWS

The tightly packed cluster of objects (sans the bag or box they came in, which had long ago decayed) consists of 31 pieces of bronze. Also included were a small sword, knife, awl and chisel.

According to the study, the bundle is the first of its kind to be found this far north. The discovery allegedly offers up evidence that soldiers traveled hundreds of miles to meet for battle, indicating a high level of social organization.

“The presence of foreign goods in burials, settlement and depositions does not necessarily mean the movement of many people, [however] the case is different at the Tollense Valley Battlefield site,” Terberger added. “In this extraordinary case, the objects found in the valley are related to the individuals of the battle who ended up in the river. The Bronze finds might have been connected to the battle and the equipment of the dead; it is also possible that offerings of equipment took place after the battle.”

The team identified parallels for the new find with objects more commonly discovered in areas like eastern France or the Bohemia region of the Czech Republic. Bronze arrowheads and dress pins used by warriors for their clothes were also recovered, which are typically found in burials in southern central Europe.

“The only Bronze sword (type Riegsee) found in the river is also an outlier in Northeast Germany,” Terberger continued. “This type is only typical for southern regions such as southern Germany to Bohemia.”

Also recovered were three gold spiral rings, which were worn by Bronze Age elite warriors in southern Central Europe. In addition to the artifacts, bones found scattered about on the riverbed at the site had strontium levels that weren’t consistent with isotopes found in the bones of locals.

Combined, these factors seem to show that Bronze Age people were able to communicate over long distances, enough so to organize a meeting place for battle —  quite a feat to do so on such a large scale before more modern forms of communication.

Thousands of remains have been found at the Tollense Valley battlefield since a conservationist happened upon a bone with a protruding arrowhead back in 1996. It’s estimated that up to 4,000 men battled it out around 1250 B.C.

“[The Tollense Valley Battlefield] is the first evidence of a Bronze Age battlefield site and, according to our knowledge, the only prehistoric battlefield of that time in Europe or probably the world,” Terberger said. “The extension and scale of the battle does completely change our image of the Bronze Age in Central Europe. The new finds fit well to the more general evidence from the site: this was not a local conflict but (also) warriors from more distant, southern regions were involved.”

The study was recently published in the journal Antiquity.