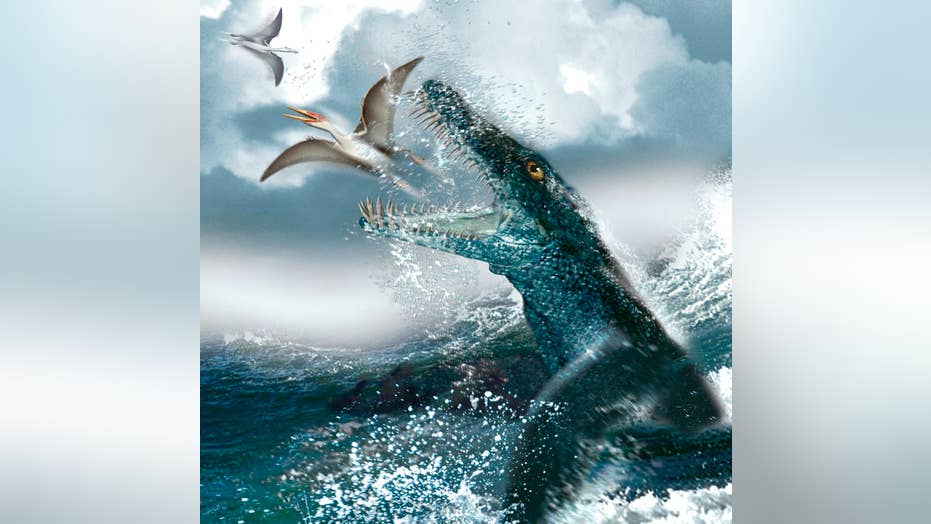 The fossils of an ancient, 150-million-year-old sea monster were recently discovered in Poland.

The petrified remains belonged to a pliosaur, an extinct reptile that could reach more than 30 feet in length and weigh several tons. They were discovered in a cornfield in Krzyzanowice, near the Swietokrzyskie Mountains, an area the study's abstract describes as "rich in fossils of coastal and pelagic reptiles."

One of the discoverers, paleontologist Daniel Tyborowski, described in detail just how massive the pliosaurs were.

"They had powerful, large skulls and massive jaws with large, sharp teeth," Tyborowski said in an interview with Science in Poland. "Their limbs were in the form of fins."

The creatures lived during the late Jurassic period and ate anything they could, Tyborowski added. In addition to the pliosaur, the researchers also found the mangled bones of ancient sea turtles, plesiosaurs and ancestors of modern-day crocodiles.

"Sea turtles ate large snails, while they themselves fell prey to large crocodiles," Tyborowski pointed out. "We know this because we found teeth marks left by those reptiles on turtle shells. On the other hand, powerful pliosaurs hunted all animals whose fossils we discovered at this site."

Several hundred bones were discovered at the site in total.

Tyborowski, who said that the fossil finds were a first for Poland, hopes the researchers will discover more large reptile fossils in the "next months and years" at the site.

The research has been published in the scientific journal, Proceedings of the Geologists' Association.

In December, the fossil of a 180-million-year-old "sea monster" from the Jurassic era was discovered with evidence of blubber and skin, making the creature more similar to modern-day dolphins than previously thought.

The fossil of an 85-million-year-old mosasaur was discovered in Kansas in October 2018.