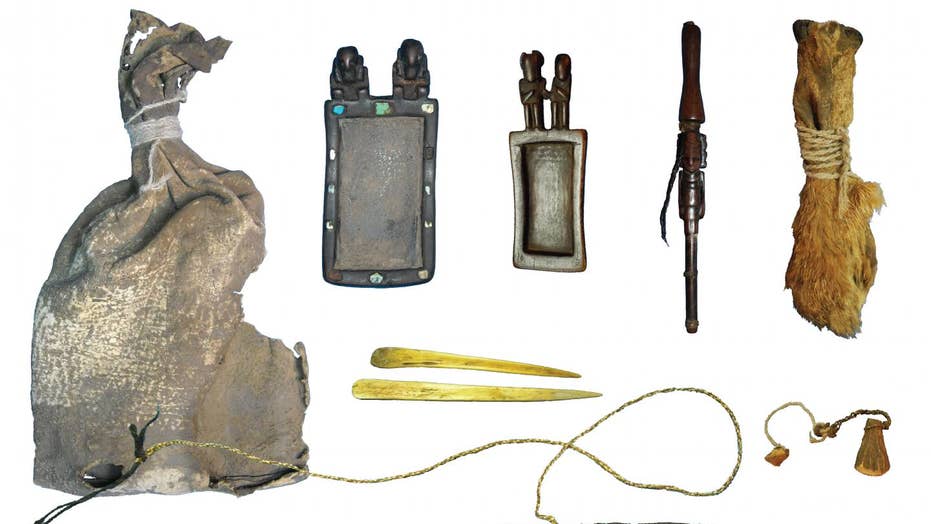 You never know when your stash might be found.

Archaeologists discovered a 1,000-year-old leather bundle in a cave in Bolivia containing traces of ayahuasca, the powerful hallucinogenic, and other drugs like cocaine.

Researchers led by the University of Berkeley, California archaeologist Melanie Miller analyzed a pouch made from three fox snouts sewn together and found that it tested positive for at least five plant-based psychoactive substances — including dimethyltryptamine (DMT) and harmine, key active compounds in ayahuasca.

The preserved ritual bundle was found at 13,000-foot elevations in the Lipez Altiplano region of southwestern Bolivia and it dates back to the pre-Inca Tiwanaku civilization, according to researchers.

Although using ayahuasca is currently popular among Silicon Valley tech workers and celebrities, researchers say these findings are a testament to mind-altering brew's ancient history.

The 1,000-year-old ritual bundle discovered by researchers in a Bolivian cave. (Photos courtesy of Juan Albarracín-Jordán and José Capriles.)

"This is the first evidence of ancient South Americans potentially combining different medicinal plants to produce a powerful substance like ayahuasca," said Miller, a researcher with UC Berkeley's Archaeological Research Facility, in a published statement.

The discovery adds to increasing evidence that psychotropic plants were consumed as drugs going back many thousands of years.

"Our findings support the idea that people have been using these powerful plants for at least 1,000 years, combining them to go on a psychedelic journey, and that ayahuasca use may have roots in antiquity," said Miller.

The drug is made by brewing the vines of the Banisteriopsis Caapi and the leaves of the chacruna (Psychotria viridis) shrub. The leaves can release DMT and the vines release harmine — a combination that increases the drug's effect.

"The tryptamine DMT produces strong, vivid hallucinations that can last from minutes to an hour, but combined with harmine, you can have prolonged out-of-body altered states of consciousness with altered perceptions of time and of the self," Miller said in a statement.

She also described the pouch made of three fox snouts as "the most amazing artifact I've had the privilege to work with."

The findings were published in the journal Proceedings of the National Academy of Sciences.