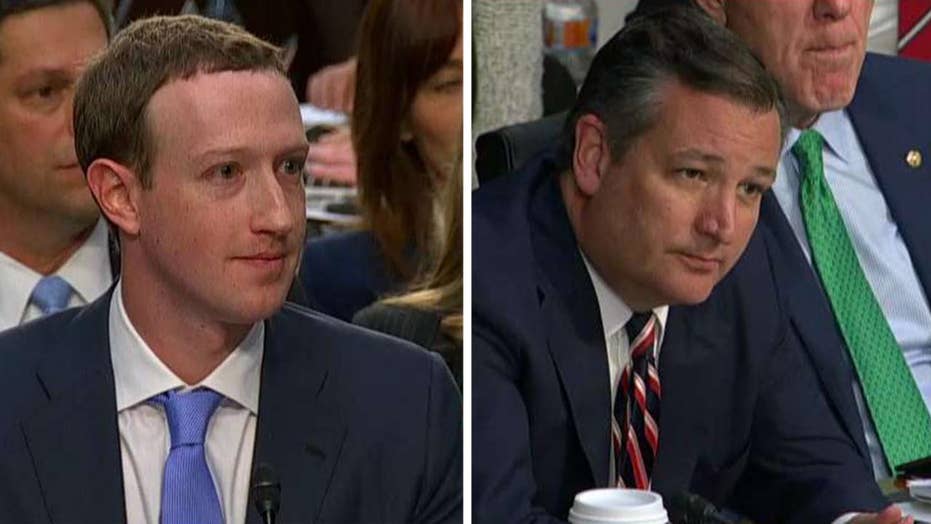 Facebook's Mark Zuckerberg responds to questions from Texas Senator Ted Cruz about whether Facebook is a neutral public forum or a biased tool for political advocacy and whether or not the CEO requires new employees to share political views.

Facebook founder and CEO Mark Zuckerberg told lawmakers Tuesday that he was "not specifically aware" of any instance where the social network had removed content posted by liberal groups amid concerns that the platform is biased against conservatives.

Sen. Ted Cruz, R-Texas, told Zuckerberg that "a great many Americans" are "deeply concerned that Facebook and other tech companies are engaged in a pervasive pattern of bias and political censorship." Cruz then ticked off a list of conservative content that he claimed had been "suppressed" by Facebook, "including stories about [2012 GOP presidential candidate] Mitt Romney [and] stories about the Lois Lerner IRS scandal."

"In addition to that, Facebook has initially shut down the Chick-fil-A Appreciation Day page ... has blocked over two dozen Catholic pages, and most recently blocked Trump supporters Diamond and Silk’s page – with 1.2 million Facebook followers -- after determining their content and brand were 'unsafe to the community.'

"To a great many Americans, that appears to be a pervasive pattern of political bias. Do you agree with that assessment?" Cruz asked.

In response, Zuckerberg noted that Cruz had raised "a fair concern" and noted that the company is based in Silicon Valley, which he described as "an extremely left-leaning place."

Cruz then asked if Zuckerberg knew whether Facebook had removed content from Planned Parenthood, MoveOn.org, or "any Democratic candidate for office." To each question, Zuckerberg responded that he was not aware of any such content.

Zuckerberg also denied that he knew the political affiliations of his employees or made personnel decisions based on politics.

Zuckerberg testified before a joint hearing of the Senate Judiciary and Commerce committees amid an ongoing controversy over the gathering of user data by Cambridge Analytica, a firm affiliated with Donald Trump's 2016 presidential campaign.