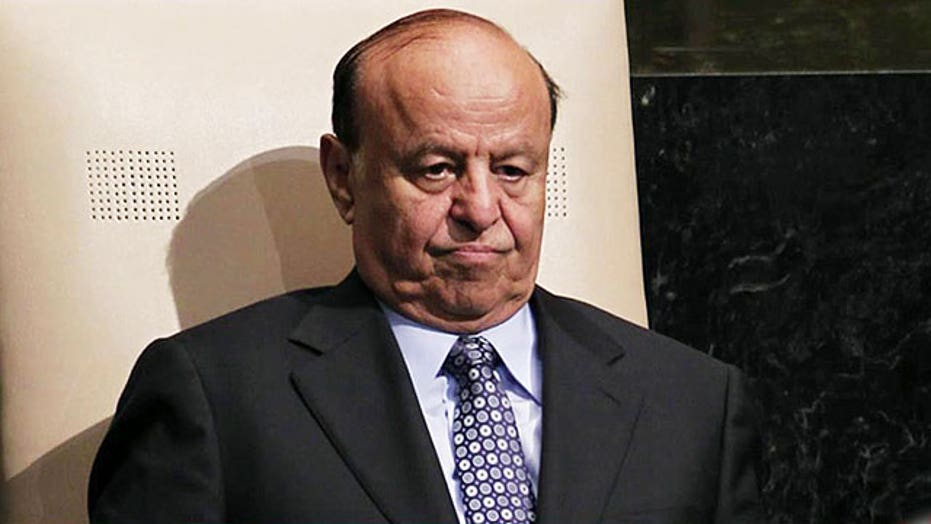 The collapse of the Yemeni government, coupled with the death early Friday of Saudi Arabia's King Abdullah, have in an instant thrown the future of America’s fight against Islamist extremists in the volatile region into question -- while potentially giving Iran more sway.

The Obama administration is still assessing the political earthquakes in the Arabian Peninsula, and for the near-term says the top priority in Yemen is the security of U.S. personnel. The State Department said it has reduced the number of personnel at the U.S. Embassy in the capital city of Sanaa.

But when the sands settle, a new government – or no government at all – in Yemen could complicate one of the administration’s most active counterterror drone programs in the world. And the new leadership in Saudi Arabia raises questions about the country’s future involvement in fighting the Islamic State and other pressing issues.

Further, a former U.S. diplomat close to the Saudi royal family told Fox News the two developments, which occurred within hours of each other, represent a “worst-case scenario” for the U.S. in terms of Iran’s ability to extend its influence.

With the collapse of Yemen’s government, the former diplomat said Tehran’s influence is now seen in at least four Middle Eastern capitals – Sanaa in Yemen, Baghdad in Iraq, Damascus in Syria, and to a lesser extent Beirut in Lebanon.

Saudi Arabia has long been a key U.S. ally, and a bulwark against Iran’s reach. Given the line of succession – the king’s half-brother Salman bin Abdul-Aziz Al Saud has replaced him – the former diplomat did not expect major policy changes in the short-term. But the source added the Saudi policy on Yemen has not been clear since 2009, and the diplomat even anticipated a softer stance from the Kingdom on Syria, where the late king committed Saudi airpower to fighting the Islamic State.

King Abdullah's death may also open up a bigger power vacuum in Riyadh than first believed. The Wall Street Journal reported that U.S. officials do not consider the 79-year-old Salman to be a strong or healthy ruler in his own right, which raises the possibility that others in the royal family could come to the forefront.

Most immediately, the Obama administration faces a critical challenge in Yemen, where President Abed Rabbo Mansour Hadi, a U.S. ally, resigned Thursday after being held captive by Houthi rebels.

Yemen has allowed the United States to wage one of its most robust counterterror drone strike operations in the world, largely targeting Al Qaeda in the Arabian Peninsula operatives – the same group that claimed credit for the Paris terror attacks.

Last September, when he spoke about his strategy to fight the Islamic State, President Obama cited counterterror programs in Yemen and Somalia as success stories. In his State of the Union address on Tuesday, he said, “We’re partnering with nations from South Asia to North Africa to deny safe haven to terrorists who threaten America.”

But the Yemen partnership is now in question. A former Pentagon official said the unraveling of security conditions in Yemen was well-understood within the intelligence community and there were strong indicators as early as September that the country was on an accelerated downward spiral.

The official indicated there are no guarantees a Yemen government under new control would honor the agreements made with the U.S. government which allow for the CIA and military to launch drone strikes.

Asked Friday about the chaos in Yemen, White House Press Secretary Josh Earnest said the administration is "committed" to the counterterrorism strategy against AQAP, which he said is probably the most dangerous Al Qaeda affiliate.

He also claimed it's not clear that Iran is "exerting any kind of command and control" over the rebels in Yemen, despite their ties.

As for Saudi Arabia, Earnest said Obama hopes to speak with the new king in the coming days and expects a "strong relationship ... will endure under the leadership of the new king."

Meanwhile, former U.S. diplomat Dennis Ross told The Wall Street Journal that with the death of King Abdullah, decision-making in Riyadh is likely to be more cautious on issues like Iran and Syria.

Abdullah, a Sunni Arab, made one of the main priorities of his rule countering mainly Shiite Iran whenever it tried to make advances in the region. He also backed Sunni factions against Tehran's allies in several countries, but in Lebanon, for example, the policy failed to stop Iranian-backed Hezbollah from gaining the upper hand.

Citing Saudi officials, the paper reports that King Abdullah became less fond of the U.S. in the final years of his reign. The king repeatedly pushed Obama to lend stronger backing to the rebels against Syrian President Bashar al-Assad, against whom he bore a personal animus, and was reportedly furious when airstrikes threatened against Damascus by Obama in the summer of 2013 did not come to pass.

The officials also said that the late king took a dim view of ongoing talks between the U.S. and Iran over the latter nation's nascent nuclear program, seeing it as a sign that Washington was more than willing to work behind its ally's back.

Among the other decisions facing Salman is whether he will continue the country's ongoing strategy of increased levels of oil production. The country produced 9.6 million barrels a day in January, according to Platts, the energy information division of McGraw Hill. That's enough to satisfy 11 percent of global demand, despite a global price drop of nearly 60 percent since June.