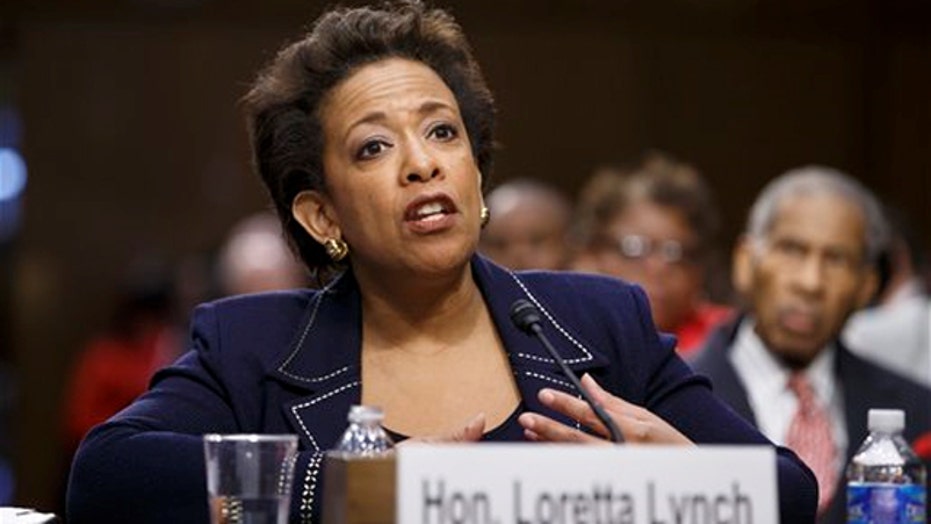 Thursday's hearings brought a wide-ranging roster of outside witnesses to testify before the Senate Judiciary Committee, including several speakers invited by Republicans to showcase opposition to the president’s use of executive powers, as well as actions taken by Holder.

“The question for me and a lot of members on this side is whether Ms. Lynch is committed to leading the Department of Justice in a new direction,” Sen. Charles Grassley, R-Iowa, said. “There's obviously people here that are going to speak about the direction the department in a different way, and we'll listen courteously to that as well.”

Former CBS investigative reporter Sharyl Attkisson testified that the Obama administration broke into her computer and phone after she reported stories on Operation Fast and Furious -- in which the Justice Department apparently lost track of guns after allowing them to flow to Mexican cartels -- as well as the deadly attack on the U.S. Consulate in Benghazi, Libya, in 2012.

“If you cross this administration with perfectly accurate reporting they don’t like, you will be attacked and punished,” Attkisson said. “You and your sources may be subjected to the kind of surveillance devised for enemies of the state.

Attkisson said freedoms protected by the Constitution are “under assault due to government policies of secrecy, leak prevention and officials’ contact with the media, combined with large-scale surveillance programs.”

Attkisson said if Lynch is confirmed, she should chart a new path and “reject the damaging policies and practices that have been used by others in the past.”

True the Vote founder Catherine Engelbrecht also testified Thursday. Engelbrecht said she was unfairly targeted by the Internal Revenue Service when she attempted to seek tax-exempt status for her group.

Jonathan Turley, a law professor at George Washington  University, and Nicholas Quinn Rosenkranz, a senior fellow in Constitutional Studies at the Cato Institute, addressed concerns they had with Holder rubber-stamping requests from the Obama administration as well as executive overreach on immigration.

Turley has been critical of the Obama administration’s use of executive power. He testified he hoped Lynch would be confirmed and that “if great leaders are shaped at great moments in history, this could be such a moment for Loretta Lynch.”

Still, he warned: “The Justice Department is at the epicenter of a constitutional crisis, a crisis that consumed her predecessor and his department,” adding that the concern has grown to alarm in the last few years under the Obama administration.

“We are watching a fundamental change in our constitutional system.  It's changing in the very way that the Framers warned us to avoid.  The Justice Department has played a central and troubling role in those changes,” Turley said.

Thursday’s testimony, which was spent mostly slamming the administration, was in stark contrast to yesterday’s hearing.

On Wednesday, Lynch offered support for some of Obama’s controversial administration policies, including his protections for millions of illegal immigrants.

Facing skeptical but largely cordial Republicans, Lynch dispatched questions on topics including terrorism, drugs and surveillance. Even the occasional confrontational exchange over immigration, an issue some Republican lawmakers seized on as a litmus test, appeared unlikely to derail Lynch's chances of confirmation.

If approved by the committee and confirmed by the full Senate, Lynch -- the top federal prosecutor since 2010 for parts of New York City and Long Island -- would become the nation's first black female attorney general.

Other Republicans, including Sens. Ted Cruz of Texas and David Vitter of Louisiana, were more openly critical and signaled probable votes against Lynch's nomination.

"Try as I might, there has been nothing I have been able to ask you that has yielded any answer suggesting any limitations whatsoever on the authority of the president," Cruz said. Lynch disagreed with that characterization, saying the American people, and not the president, would be "my client and my first thought."

In addition to Turley and Rosenkrantz, witnesses speaking on Lynch's behalf on Thursday are to include Janice Fedarcyk, the former head of the FBI's New York field office, and David Barlow, a former U.S. attorney from Utah who has served with Lynch on a committee of prosecutors that advises Holder on policy matters. Other witnesses include Milwaukee County Sheriff David Clarke, who has publicly criticized Holder as not being supportive enough of law enforcement.

Though neither Obama nor Holder was present, their actions were a heavy focus of the hearing.

Republicans criticized Holder as too politically close to Obama, and they repeatedly lambasted the administration's new policy granting work permits and temporary deportation relief to some 4 million people who are in the country illegally. The committee chairman, Grassley, called the effort "a dangerous abuse of executive authority."

Lynch said she had no involvement in drafting the measures, but called them "a reasonable way to marshal limited resources to deal with the problem" of illegal immigration. She said the Homeland Security Department is focusing on removals of "the most dangerous of the undocumented immigrants among us."

Lynch aligned herself with Holder on certain policy decisions, agreeing with his assertions that interrogation by waterboarding is torture and illegal, that civilian courts are an appropriate venue to prosecute suspected terrorists captured overseas and that the department's limited resources are best reserved for prosecuting violent offenders.

But on other points, she also struck a firmer law-and-order stance.

Lynch, whose office in New York is leading a civil rights investigation into the police chokehold death of Eric Garner in Staten Island last summer, also was careful to express solidarity with law enforcement at a time when racially charged incidents of police force have stirred community concerns of bias.