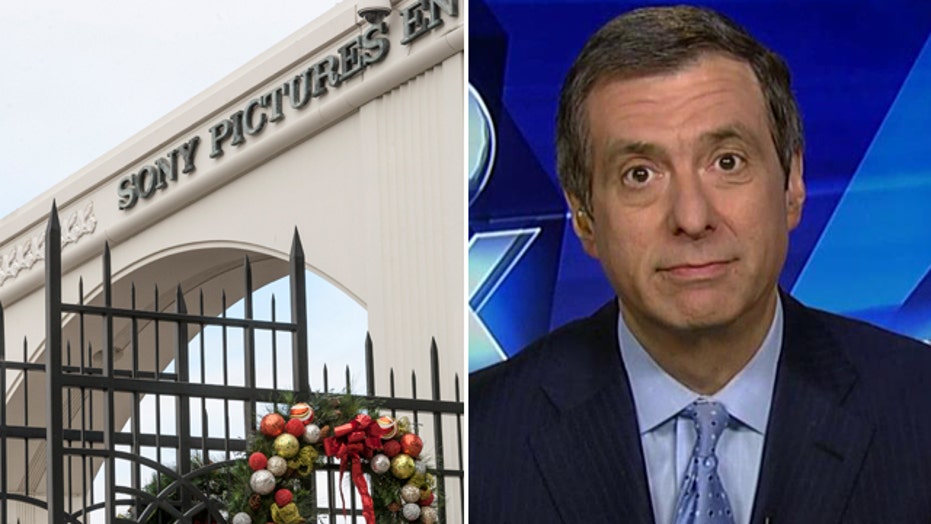 Kurtz on 'Special Report': Did Sony cave on free speech?

The company’s decision to bow to threats of violence from the North Korean-backed hackers has plunged the media giant into a cauldron of Hollywood hate.

Sarah Silverman: “All joking aside, we just gave a comfy foothold to censorship & it doesn't get any better from this point on.”

Rob Lowe: “Wow. Everyone caved. The hackers won. An utter and complete victory for them. Wow.”

And Jimmy Kimmel teed off on his ABC show: “I think allowing a ruthless dictator of another country to decide American people can and cannot see in our own country is against, like, everything we’re supposed to stand for, right?”

Yes, yes and yes. But I’m not going to join the stampede.

Sony’s unforgivable blunder was in making this misbegotten movie in the first place. I mean, an assassination “comedy” that includes Kim Jong Un’s head being blown up, with an internal debate over how much his hair should be on fire? As Greta Van Susteren tweeted, “Anyone who has been to NK knows how dangerous it is and would not have been so stupid to make that movie.” Sony Pictures and Seth Rogen didn’t even have the wit to make it about a fictional regime with a short leader.

Imagine the outrage if the North Koreans or anyone else made a film that showed President Obama being graphically killed? Yes, I know “Death of a President,” a 2006 film that showed the murder of George W. Bush, won an award at the Toronto film festival, and I find that despicable. But fortunately, most people never even heard of that monstrosity.

Having made “The Interview,” Sony did just about everything wrong once the hackers paralyzed the company and revealed all kinds of sensitive e-mails. But I’m sorry, I’m not going to pile on for the decision to cancel the Christmas debut of this  ill-conceived project.

The threat of violence may be empty, but if a single movie-goer was hurt at a theater where this film was being shown, Sony would face universal condemnation and enormous legal liability. The major theater chains were refusing to carry it anyway. It’s easy to take potshots, but Sony was in an impossible box.

Where the company is compounding the damage, though, is in making the film completely disappear. Sony could take a stand in favor of free expression by streaming the movie online, or putting it on DVD, handing the decision to consumers without creating theater lines that would present a target.

But you can tell that Sony just wants to be done with this debacle, and free speech must be very low on its list of priorities right now.

The escalation of threats, and U.S. officials confirming that North Korea is behind the hacking, should make us reconsider the media’s role. It was a major misstep for news organizations to allow this international crime to be overshadowed by the gossipy e-mails about Angelina Jolie, George Clooney and other stars.

I noted how uncomfortable I was when we talked about the story on “Media Buzz,” and even though the correspondence showed Sony Pictures’ Amy Pascal and a producer making racially tinged jokes about President Obama, we were still trafficking in stolen property.

Perhaps the admonition from screenwriter Aaron Sorkin (whose own mildly embarrassing correspondence was leaked) should now be read in a different light:

“I know there’s juicy stuff in the emails and I know some of us have been insulted and I know there’s more to come. No one’s private life can totally withstand public scrutiny. But this is much bigger than hurt feelings and banged-up egos.

“If you close your eyes you can imagine the hackers sitting in a room, combing through the documents to find the ones that will draw the most blood. And in a room next door are American journalists doing the same thing. As demented and criminal as it is, at least the hackers are doing it for a cause. The press is doing it for a nickel.”

If there’s another Sony document dump, shouldn’t news organizations just say no? There will always be places for people to find this stuff, of course. But the rest of us should stop enabling the hackers.