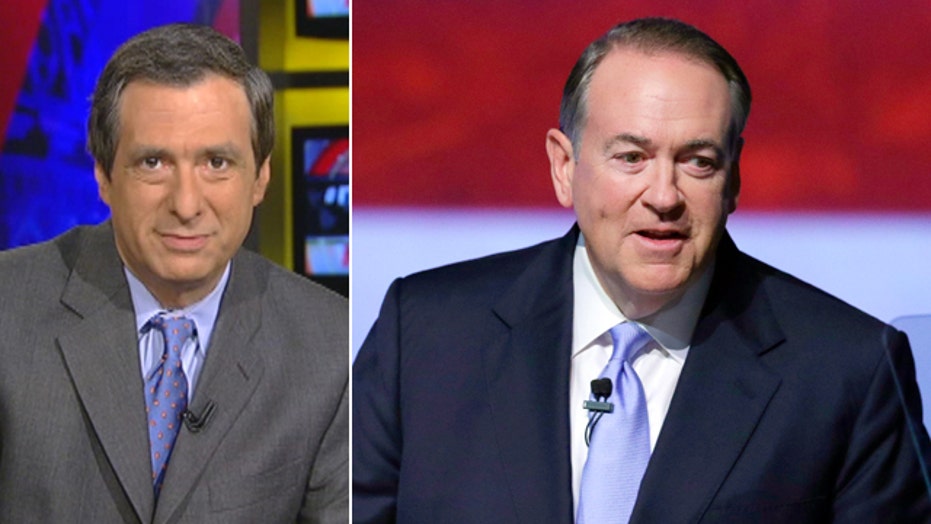 Kurtz: Why Huckabee became a piñata

The media’s conventional wisdom is that Mike Huckabee, a onetime winner of the Iowa caucuses, doesn’t have much of a shot in 2016.

So why are some pundits and news outlets suddenly attacking him if he’s just an asterisk?

The answer is that the former Arkansas governor and ex-Fox News contributor will matter, at least in the early states. And beyond that, some conservatives have a visceral dislike for the guy—and especially for his passionate defense of entitlement programs.

Now Huckabee’s presidential campaign is getting some respect from the likes of Washington Post columnist Chris Cillizza, who says “he is, by far, the Republicans’ best messenger to the middle and lower-middle classes — economic brackets that the party has struggled to win in recent elections.”

But National Review dismisses such pieces as making “the enormous assumption that the GOP can appeal to these brackets only by using the language of the Left.
“Take as an example this statement regarding entitlements: ‘There are some who propose that to save the safety nets, like Medicare and Social Security, we ought to chop off the payments for the people who had faithfully had their paychecks and pockets picked for the politicians promising them that their money would be waiting for them when they were old and sick.’
“There is no mainstream conservative in this country who advocates Washington’s eliminating benefits already promised to citizens. This is the same dishonest argument you hear whenever there’s talk of entitlement reform. Almost every plan offers an element of choice — allowing people to voluntarily enter into a new deal with government — or it changes the parameters of entitlements for future generations.” The piece says Huckabee is running a “vanity campaign,” but that “the media will almost certainly use Huckabee as an example of how conservatives should be talking about poverty, inequality, and entitlements…”

I’m not sure that’s true, since plenty of liberals acknowledge that Social Security and Medicare cannot survive at an unsustainable level of spending without reform. But the issue came up on “Face the Nation” Sunday, when Bob Schieffer said Huckabee sounded more like a Democrat on the issue of Social Security.

Huckabee’s response: “I’m thinking, wait a minute, didn’t the government take that out of my check for all these years involuntarily? But why would you punish the recipients who played by the rules that they were forced to play by?”

Huckabee spokeswoman Alice Stewart says her boss “feels very strongly” about “people who have paid into the system all these years, and to now say the government has spent beyond its means and we don’t have the money to pay you back, that’s wrong.”

As for the rising tide of media attacks, Stewart says: “You don’t fire bullets at someone who’s not a deserving target, so we expect it.” Critics, she says, “would not be wasting energy on a candidate they don’t think is viable. It’s part of the vetting process.”

The former governor’s stance has certainly distinguished himself from the GOP field on entitlements. Of course, even Republican reformers like Paul Ryan would protect the next wave of retirees from benefit changes or cuts, while insisting the programs need a long-term overhaul if they are to survive.

The liberal site Slate welcomes Huckabee’s rhetoric because it illuminates the reality that Republicans never actually get around to chopping Medicare and Social Security:

“What Huckabee understands—and what makes him a serious presence in the GOP field—is that many Republican voters, even those on the right, aren’t opposed to generous government spending on individuals. Disproportionately older or elderly, they’re strong supporters of Social Security and Medicare, which they see as earned benefits. Instead, they’re opposed to spending on people perceived as undeserving…

“But unlike Bush—who wanted private accounts for Social Security—or Ryan—who wanted to bring vouchers to Medicare—Huckabee makes no pretense of his support for ‘entitlement reform.’ Whereas Romney pandered to seniors, Huckabee actively supports their vision of a gerontocratic welfare state, with support for the children and grandchildren of these beneficiaries. It’s of a piece with his former Arkansas governorship—where he signed health care legislation for uninsured children and funded education programs for low-income students—and it’s also why he’s defended the Social Security disability program. ‘To assume that anybody who is disabled is really fraudulent, I think that’s an insult to a person,’ he said to reporters on Wednesday. ‘You should make the government prove that person isn’t in need rather than the person having to.’”

But this approach, says Slate, could hurt Huckabee in the primaries “If you’re an anti-government social conservative, why vote for Huckabee when there’s Sen. Ted Cruz or even Gov. Bobby Jindal?”

What’s going on here, in my view, is that Huckabee ticks off more doctrinaire conservatives because he’s had to govern in the real world. He ran Arkansas for a decade, up against a Democratic legislature, and had to make the kind of tax-and-spending compromises that requires.

At the same time, he doesn’t viscerally hate government. And given his modest upbringing in a place called Hope, he thinks it can be a force for good for those at the bottom of the ladder. That doesn’t sit well with the party’s corporatist wing.

Huck has also taken heat for having endorsed some quack medical cures to make money, and Schieffer asked him about that on Sunday. “If that’s the worst thing that somebody can say to me, is that I advocated for people who have diabetes to do something to reverse it and stop the incredible pain of that, then I’m going to be a heck of a good president,” Huckabee said.

Syndicated columnist and Fox News contributor George Will tees off on Huckabee’s recent comments about the courts, calling them “appalling”:

“Huckabee says, ‘We are moving rapidly toward the criminalization of Christianity,’ and he asserts a biblical duty to pray for the Supreme Court justices pondering the matter of same-sex marriages. Politico recently reported that Huckabee told some conservative pastors that ‘he cringes whenever he hears people call a court decision “the law of the land”…This is not that complicated. There are three branches of government, not one.’ To radio host Hugh Hewitt, Huckabee further explained his rejection of the idea of ‘judicial supremacy, where if the courts make a decision’ it is ‘the law of the land.’”

This, says Will, amounts to “the pre-Civil War doctrine of ‘nullification’ — the right of states to disregard laws they deem unconstitutional.”

People on the left and right have to live with court rulings they don’t like. It’s not clear what Huckabee plans to do about this other than decry it. Stewart, his spokeswoman, says he’s not arguing that court rulings aren’t binding, but saying that judges “are not the supreme being” and are engaging in “judicial overreach.”

We’ll have to see whether Huckabee’s populist message resonates beyond his religious base this time around. But the people who are pounding him sure seem to be taking him seriously.