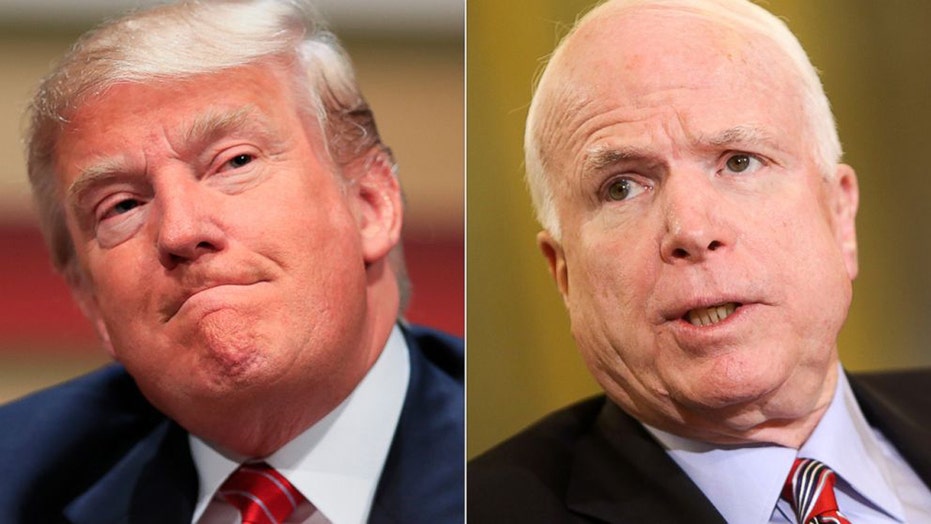 Daughter of Arizona senator speaks out on hot mic tape

Just one week ago, it seemed Republican senators had mostly come around to Donald Trump – a Fox News analysis at the time found just eight of 54 GOP senators were not supporting their presidential nominee.

But the leaked 2005 tape of Trump making vulgar remarks about women has left the conference deeply divided and muddied the picture of how much so-called establishment support Trump truly has.

The suggestion in some media outlets – and by Democratic groups – that Republicans are abandoning his bid en masse overstates these defections. But the split is significant, though Trump himself suggests he doesn’t need their support.

Fox News has reviewed lawmakers’ statements since the release of the audio, and found the following:

Of the 16 who do not support Trump, eight either rescinded their endorsements or announced opposition after being on the fence in the wake of the tape leak. Six are up for re-election. They are: Sen. Kelly Ayotte, R-N.H.; Sen. Rob Portman, R-Ohio; Sen. John McCain, R-Ariz.; Sen. Mike Crapo, R-Idaho; Sen. John Thune, R-S.D.; and Sen. Lisa Murkowski, R-Alaska. Sen. Cory Gardner, R-Colo., and Sen. Dan Sullivan, R-Alaska, also announced their opposition to the Republican nominee this weekend.

Those now backing away from Trump have all taken different approaches. Ayotte said Saturday she would not vote for either presidential candidate, but rather write in the name of Republican vice presidential nominee Mike Pence. Crapo and Thune urged that the party put forward Pence to take Trump’s place – there’s no indication there is any move afoot to do so, particularly after Trump helped settle some party panic with his Sunday debate performance against Hillary Clinton. McCain said he would write in the name of “some good conservative Republican” who is qualified to be president.

Meanwhile, eight GOP senators either opposed Trump or were withholding support even before the release of the audio.

A handful of those not in Trump’s corner have left themselves some wiggle room. Toomey reportedly has not ruled out backing Trump, but said in a statement Monday he has not endorsed him and has “repeatedly spoken out against his flawed policies, and his outrageous comments.”

The list of GOP senators condemning Trump’s remarks, while still supporting the nominee, is far longer.

This even includes one senator, Deb Fischer of Nebraska, who over the weekend urged Trump to step aside but on Tuesday said she plans to vote for him.

“Most of those senators have plenty of time to recover from any ill feelings about this,” said Karl Rove, Fox News contributor and former senior adviser to President George W. Bush. “But the people on the ballot this year, particularly in purple states, are in an awkward place.”

All in for Trump

Other senators remain squarely in Trump’s corner and defending against the intra-party attacks.

Sen. Jeff Sessions, R-Ala., the first GOP senator to endorse, said in a pre-debate interview with Fox News’ Bret Baier, “I just think our officials need to slow down, think this thing through, and give Donald Trump a chance.”

Despite Sunday’s debate performance, Trump continues to face fallout on the House side. House Speaker Paul Ryan announced Monday he would not campaign with Trump – though did not rescind his endorsement.

Trump spokesman Jason Miller tweeted that nothing has changed for the campaign, and that they have “always been powered by a grassroots movement –not Washington.”

“The party is obligated to back him and they have a responsibility to do so,” Rove told Fox News. “This may require the party to dial up more in states that Trump is not active in, but that will be done quietly. It is appropriate for [the RNC] to do what they did.”

But with control of the Senate in play this cycle, Democratic strategist and Fox News contributor Joe Trippi said GOP senators up for re-election are between “a rock and a hard place.”

“The only thing GOP incumbent senators can do is support him loosely and try to disengage with the national Trump and Clinton fight,” Trippi said. “The real likelihood is, whoever wins the presidency will end up with control of the Senate, and in the end, there is going to be less power for both parties – and maybe that’s what people want.”