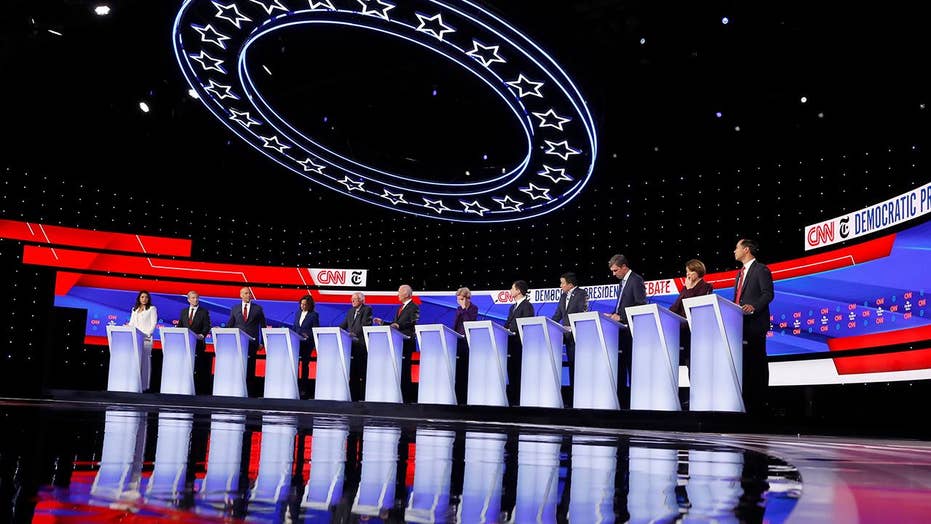 More than two-dozen candidates made a bid for either the Republican or Democratic nomination for president in the 2020 election cycle, making for especially crowded Democratic debate stages. But in the end, there can only be one nominee for each party.

Here are the candidates who have dropped out of the race so far, ending their bids for the White House.

Sen. Michael Bennet, D-Colo. -- Bennet, who ran as a moderate, stayed in the race until New Hampshire but struggled to gain any traction. He left the contest on Feb. 11.

Sen. Cory Booker, D-N.J. -- Booker was one of the higher-profile senators to run for the Democratic nomination, but he couldn't find a break-out moment on the campaign trail or on the debate stage to attract attention to his campaign in the crowded field. Booker dropped out before the Iowa caucuses on Jan. 13.

Gov. Steve Bullock, D-Mont. -- Bullock tried to make the case that he, a Democratic governor of a red state, was the best candidate to beat Trump. Democratic voters disagreed and he ended his campaign on Dec. 2.

Julian Castro, former HUD secretary -- The only Latino in the field was bumped off the Democratic debate stage by increasing polling requirements and couldn't find the money to get back on. He dropped out on Jan 2.

Bill de Blasio, NYC Mayor -- De Blasio was widely mocked during his presidential run for his poor approval rating in New York and didn't even make it through the summer. He suspended his campaign on Sept. 20.

John Delaney, former Maryland congressman -- The first Democratic candidate to announce a 2020 run in 2017, Delaney sacrificed his House seat to spend time courting votes in Iowa. Instead, he dropped out of the race immediately before the Iowa caucuses, saying he had too little support to reach the 15 percent viability threshold but had enough support "to cause other moderate candidates to not to make the viability threshold." He left the race on Jan. 31.

Sen Kirsten Gillibrand, D-N.Y. -- Gillibrand is another candidate who didn't make it through the summer. She dropped out on Aug. 28.

Sen. Kamala Harris, D-Calif. -- Harris seemed like a frontrunner in the early stages of the race but saw her poll numbers drop precipitously as her campaign was roiled by internal dissension. She left the race on Dec. 3.

Gov. Jay Inslee, D-Wash. -- Running on a platform of fighting climate change didn't work for the West Coast governor, who suspended his campaign on Aug. 21.

Rep. Seth Moulton, D-Mass. -- Moulton dropped out on Aug. 23 to focus on his reelection to the House of Representatives.

Beto O'Rourke, former Texas representative -- O'Rourke struggled to capture the magic that allowed him to run a relatively close race against Sen. Ted Cruz, R-Texas, in 2018. He dropped out on Nov. 1.

Rep. Tim Ryan, D-Ohio -- The moderate congressman ended his White House bid on Oct. 24 to focus on his reelection.

Rep. Eric Swalwell, D-Calif. -- Swalwell left the presidential race on July 8. He was the first candidate to do so on either side.

Marianne Williamson, author -- The self-help author who preached about love on the campaign trail waited until Jan. 10 to exit the presidential race.

Andrew Yang, tech entrepreneur -- Yang amassed a passionate social media following in his "Yang Gang" but was unable to turn it into votes in Iowa or New Hampshire before he dropped out on Feb. 11.

Mark Sanford, former South Carolina governor -- Sanford tried to attract conservative Republicans concerned with the fiscal direction of the country but was unable to break into Trump's loyal base. He suspended his campaign on Nov. 12.

Joe Walsh, former Illinois representative -- The former Tea Partier and current radio host said he would rather support a socialist than Trump as he suspended his campaign on Feb. 7.