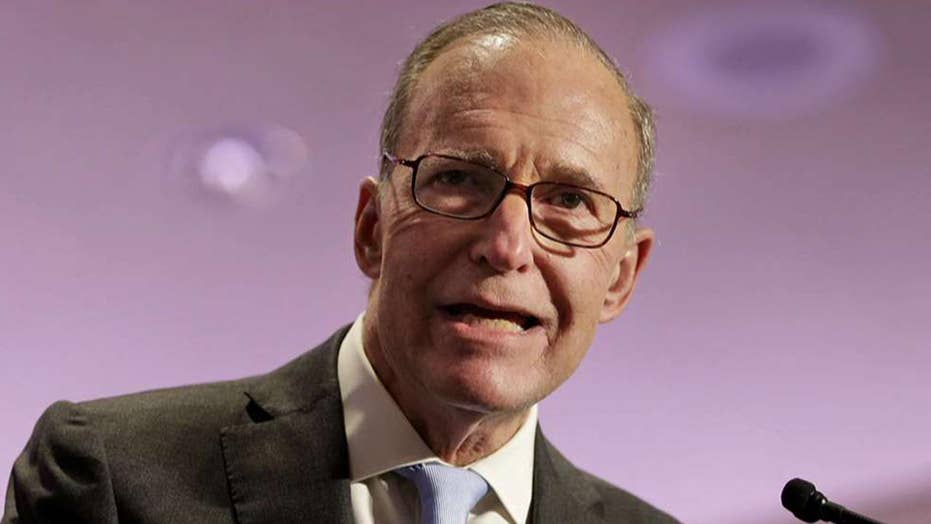 Kudlow, a 70-year-old conservative commentator, is replacing Gary Cohn who resigned earlier in March. Kudlow told The Associated Press that while he opposes tariffs, he is still “in accord” with Trump’s policies.

In a tweet announcing his selection of Kudlow, Trump said: "Our Country will have many years of Great Economic & Financial Success, with low taxes, unparalleled innovation, fair trade and an ever expanding labor force leading the way."

Read on for a look at Kudlow's background and experience.

He’s a CNBC contributor and commentator

Kudlow has long been a respected business and economics commentator, getting his own CNBC show in 2011. Since then, he’s hosted a variety of shows on the network, including: “The Kudlow Report” and “Kudlow & Cramer.”

He’s remained with the business news channel as a contributor, colleague and friend to many at the network.

It was on CNBC that Kudlow gained a high-profile platform for explaining, defending and — at times — faulting Trump's economic agenda.

Kudlow has also contributed to the conservative National Review.

Kudlow worked in the Reagan administration

Larry Kudlow served as the associate director for economics and planning in the Office of Budget during the Reagan administration. (Reuters/Brendan McDermid)

During former President Ronald Reagan’s first term, Kudlow served as associate director for economics and planning in the Office of Management and Budget (OMB).

When Trump's own tax cuts ran into resistance over the higher budget deficits that would result, Kudlow downplayed the risks of debt. He argued on CNBC that Reagan ran even higher deficits to finance tax cuts and military spending — a formula that Kudlow contends helped accelerate growth.

He was a chief economist for a Wall Street firm

Kudlow’s career began on Wall Street, where he worked for the Federal Reserve Bank of New York.

Eventually, Kudlow became the chief economist for Wall Street investment firm Bear Stearns. The firm was, at the time, a small upstart, according to a profile in the Rochester Review.

During the 2016 election, Kudlow served as an informal adviser to Trump. He’s since praised Trump’s tax plan and immigration reform.

Kudlow took a month off from Bear Stearns to enter drug rehab, he told The New York Times in a 1994 interview.

“I am willing to share with you my problem,” Kudlow said then, adding that he takes “full personal responsibility.”

His commitment to Alcoholics Anonymous meetings was reportedly a contributing factor in why he ultimately ruled out a Connecticut Senate bid in 2016.

“The thought that politics would interfere with my participation in AA, which is a huge part of my life, I just can’t take that risk,” he told the New York Post in February 2016. “This is the hardest decision I’ve ever had to make. It took a while, but I made the right decision.”

Kudlow has a history degree

Larry Kudlow graduated from the University of Rochester with a degree in history. (AP Photo/Seth Wenig)

Kudlow graduated from the University of Rochester in New York in 1969 with a history degree.

While in college, Kudlow joined the Students for a Democratic Society and became an anti-war organizer, according to The Times. He even traded in his Porsche for a Volkswagen bus, the newspaper reported.

According to The Times, Kudlow avoided the Vietnam War draft because he had asthma.

Kudlow started a master’s program in economics and policy at Princeton University, but ultimately never completed it.

He was a Democrat

Kudlow worked on Democratic campaigns in New York following his college graduation. But he’s since evolved into a Republican.

If he had entered the Connecticut Senate race, he would have challenged Democratic incumbent Richard Blumenthal as a Republican.

Kudlow sticks to his suits

Known for often wearing pinstriped suits, Kudlow has had the same tailor for 26 years.