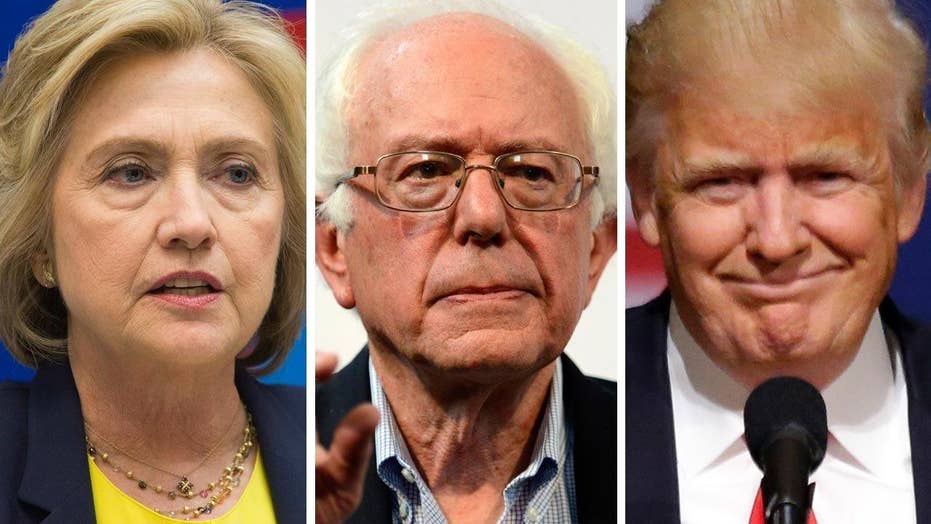 While he hasn’t yet thrown in the towel, Bernie Sanders’ long-shot campaign to bring "revolution" to the White House has about hit a wall -- which means the mad scramble for his millions of supporters has begun.

But where will they go -- and, perhaps more importantly, what are the presumptive Republican and Democratic nominees doing to woo them?

For his part, Donald Trump made a very public appeal to Bernie's legion of backers in his victory speech Tuesday night closing out the GOP primary season.

“To all those Bernie Sanders voters who have been left out in the cold by a rigged system of superdelegates, we welcome you with open arms,” Trump said. Going forward, the billionaire is poised to claim common ground with the Sanders movement, not only in their anger toward a "rigged" system but their common opposition to free-trade deals.

Yet Hillary Clinton, too, after securing the delegates needed to win the nomination Tuesday, is sure to fight hard for those voters. Analysts suggest it may take some changes on her part -- including in her selection of a running mate -- but she has the clear advantage.

The stakes arguably are higher for Clinton. If Sanders supporters end up staying home on Election Day, that takes droves of Democratic voters off the board.

Recent polling suggests some Sanders voters are ready to bolt. An ABC/Washington Post poll last month found 20 percent of them would vote for Trump over Clinton, muddying claims that they have nowhere to go but Clinton.

Conant voiced some skepticism that they'd follow through, however, citing similar predictions in 2008.

That’s not to say Trump couldn't put a wrench in Clinton’s plans to unite the party if he is able to paint her as the ultimate Washington insider -- while exploiting the grievances of Sanders' supporters and finding common ground.

“They’ve been talking about a lot of the same things,” Barry Bennett, Trump’s senior campaign adviser, said on Fox News Wednesday. ”It’s very much an anti-Washington type of message they both share. The solutions they share can be slightly different, more than slightly different, but the problems are the same.”

As to Clinton's task of uniting the party, Conant said, “Anything Trump can do to make that more difficult, either by attacking her, or picking off Sanders supporters, complicates her path to the White House.”

Democratic strategists held out hope that Clinton will patch up the divide.

Brad Bannon, Democratic strategist and CEO of Bannon Communications Research, told FoxNews.com that high-profile endorsements will end the resistance to her candidacy – especially those from President Obama and Sanders himself.

“A lot of the air will go out of the ‘Bernie or Bust’ balloon when [Sanders] announces his support,” Bannon predicted.

But it may require some adjustments from Clinton. Bannon said an endorsement from liberal Sen. Elizabeth Warren, D-Mass., could be helpful, especially if Clinton picks her for running mate.

Robert Weiner, a former White House spokesman and Democratic strategist, said focusing on issues – especially those important to millennials -- would be the real way Clinton picks up their support.

But Weiner said that ultimately the main motivator may be Trump himself.

Trump may not be the only alternative option for Sanders voters, with third-party candidates like the Green Party’s likely nominee Jill Stein or the Libertarian Party’s Gary Johnson emerging as potential spoilers. Stein has been hopeful she can bring in disaffected Bernie backers.

“Bernie’s supporters are increasingly looking for a place to go,” Stein told The Wall Street Journal.

Eric Fehrnstrom, a former adviser to 2012 GOP nominee Mitt Romney, told FoxNews.com while he believes most Sanders supporters will back Clinton, “Liberal Democrats who supported Sanders in the primary but feel they can't get on board with Hillary are more likely to vote for the Libertarian ticket than defect to Trump.”

While some polls have shown strong support for third-party candidates, including a recent Fox News Poll that showed 10 percent of voters backing Johnson, Bannon believes that will dwindle now that Clinton has clinched the nomination.

“I think you’ll see in the next few weeks, the Johnson and Stein bumps getting a lot smaller,” Bannon said.