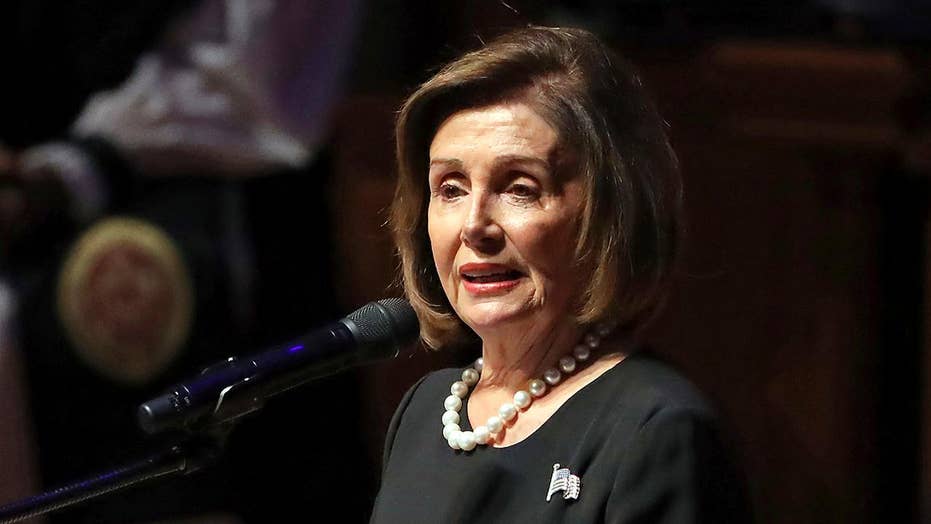 Pelosi says the resolution will 'eliminate any doubt as to whether the Trump administration may withhold documents, prevent witness testimony, disregard duly authorized subpoenas.'

Two House Democrats broke ranks with their party leadership on Thursday's highly-contentious vote for a resolution setting the rules for the impeachment inquiry into President Trump.

The resolution passed 232-196 but lacked votes from Reps. Jeff Van Drew, D-N.J., who has long expressed skepticism about impeachment, and Collin Peterson, D-Minn, whose district Trump won by 31 points. No Republicans voted for the resolution, signaling that the House GOP still stands firmly behind Trump as he comes under heavy fire.

"At the end of the day we’ll have the same president and same candidate and a failed impeachment process, and the only difference would be that the president will have been exonerated of charges," Van Drew said in a statement to Fox News.

In this Thursday, Jan. 14, 2016, file photo, former state Sen. Jeff Van Drew, D-Cape May Court House, speaks at a Senate Budget and Appropriations Committee meeting in Trenton, N.J. Van Drew, now a freshman Democratic Congressman, was one of two Democrats to vote against the House resolution setting rules for the impeachment inquiry into President Trump on Tuesday. (Associated Press.)

House committees have held nearly a dozen depositions of witnesses who have testified behind closed doors about their knowledge of a July 25 phone call between Trump and Ukrainian President Volodymyr Zelensky. It's been alleged, by an anonymous whistleblower, among others, that Trump sought to persuade the foreign leader to open an investigation into 2020 presidential candidate and former Vice President Joe Biden and his son Hunter's business dealings in Ukraine in exchange for military aid to that nation.

Van Drew said that although he "feels concerned with many of the allegations related to the president," he doesn't think it's enough to warrant Trump's removal from office.

Peterson is one of two Democrats remaining in the House who voted to authorize impeachment against Bill Clinton in 1998.

U.S. Rep. Collin Peterson of Minnesota, the top Democrat on the House Agriculture Committee, is shown ahead of a news conference about the farm bill on Tuesday, Dec. 4, at the South St. Paul Municipal Airport in South St. Paul, Minn. Peterson was one of two Democrats to vote against a resolution setting rules for the impeachment inquiry into President Trump Thursday. (Associated Press)

SEN. BLACKBURN: DEMOCRATS ARE ONLY HOLDING IMPEACHMENT VOTE AFTER 'FLAK' FROM CRITICS

Other Democrats said their support for Thursday's resolution was not necessarily an indication of how they would vote on possible impeachment articles. Freshman Rep. Kendra Horn, D-Okla., announced she would vote for the resolution while making clear it was not a vote for impeachment -- just to authorize the rules for impeachment hearings. Trump carried Horn’s district by 13 points in 2016. Horn won her seat last fall in what some observers called an upset.

Republicans have kept their arguments against impeachment largely to the process Democrats have used to pursue it, saying that a rules resolution like the one passed Thursday was used to authorize impeachment proceedings against both Richard Nixon and Clinton and should be passed this time around as well. There is no requirement in the Constitution or House Rules, however, requiring such a resolution to authorize an impeachment inquiry.

In a letter to Democratic colleagues Monday, House Speaker Nancy Pelosi, D-Calif., said she was bringing the rules resolution to the floor specifically to take that talking point away from Republicans.

Republican representatives, however, have not been satisfied with the move, saying that the impeachment inquiry is already discredited by the secret hearings and bias against Trump from Democrats.

"It's clear Pelosi needs to declare a mistrial," Rep. Steve Scalise, R-La., said Tuesday as he and Rep. Jim Jordan, R-Ohio, accused House Intelligence Committee Chairman Adam Schiff, D-Calif., of stopping a witness from answering certain Republican questions during a deposition. "This has been a tainted process from the start. What happened today confirms even worse just how poorly Adam Schiff is handling this process, denying the ability for Republicans to even ask basic questions that are critical to the heart of whether or not a President of the United States is impeached."

Additionally, on the House floor on Thursday, Rep. Tom Cole, R-Okla., said Republicans offered 17 amendments to the impeachment resolution and "not one" was accepted. Rep. Ross Spano, R-Fla., also criticized the resolution, noting Republicans will be unable to subpoena witnesses without the approval of Schiff, echoing a criticism other Republicans have leveled about the impeachment rules resolution released Tuesday.

Rep. Justin Amash, I-Mich., who left the Republican caucus this year after a longstanding tiff with Trump and much of the GOP, also voted for the resolution Thursday.