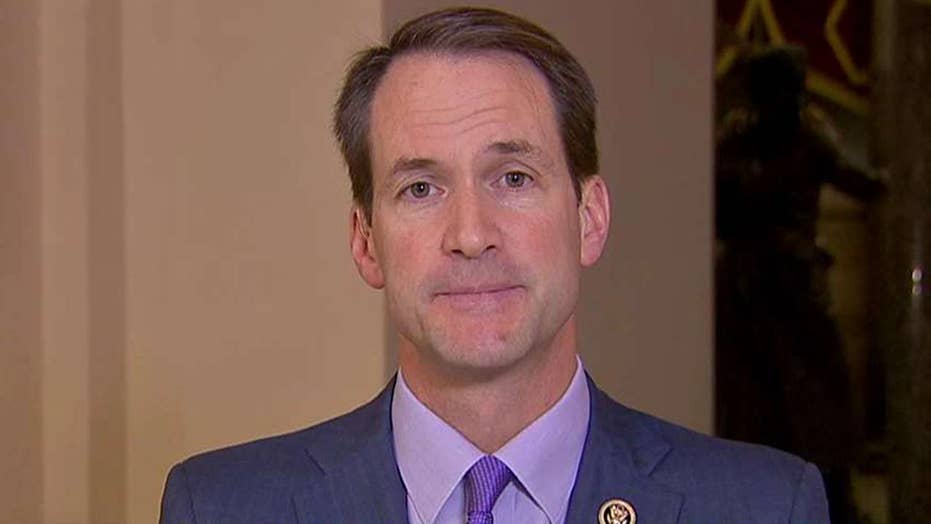 Democrat on House impeachment vote: We are doing exactly what Republicans asked for

Rep. Jim Himes questions why Republicans are speaking out against a House impeachment resolution that will make the rules clear and give President Trump rights in the process.

Tim Morrison, who was the top adviser on the National Security Council handling Russian and European affairs, is testifying before House committees Thursday as part of the ongoing impeachment inquiry into President Trump, a day after resigning his post.

The testimony from Morrison, a former top Republican staff member, has potential to be damaging for Trump, as he was cited by acting U.S. Ambassador to Ukraine Bill Taylor as revealing that U.S. Ambassador to the EU Gordon Sondland told a Ukrainian official that the delivery of military aid to the country was contingent on Kiev helping with an investigation of Burisma Holdings, the energy company where Joe Biden’s son Hunter had been a board member.

This request – and allegations of a quid pro quo tied to military aid – are at the heart of the impeachment probe.

"I was alarmed by what Mr. Morrison told me about the ... conversation. This was the first time I had heard that the security assistance – not just the White House meeting – was conditioned on the investigations," Taylor said in his recent testimony, referring as well to discussions over a meeting between Trump and Ukraine's president.

Morrison and Taylor spoke at least five times in the weeks following the July phone call as the defense expert and the diplomat discussed the Trump administration's actions toward Ukraine, according to Taylor's testimony.

Taylor also said that Morrison told him that he had a "sinking feeling" after a conversation in which Sondland explained to him that Trump said he was not asking for a "quid pro quo," but instead insisted that Zelensky "go to a microphone and say he is opening investigations of Biden and 2016 election interference."

Trump continues to insist that there was no quid pro quo, that the aid, which was eventually given, was not tied to any investigation, and that his phone call with Zelensky was "perfect."

The impeachment inquiry, which has been conducted by the House Intelligence, Oversight, and Foreign Affairs Committees, began exploring Trump's dealings with Ukraine after a July 25 phone call between Trump and Ukrainian President Volodymyr Zelensky resulted in an anonymous whistleblower complaint expressing concern that Trump was pressuring Ukraine into investigating his political opponents.

Both presidents have since stated that there was no such pressure.

Republicans continued to claim Thursday that the rules were propping up a "sham" inquiry.