The headaches began when Trump tweeted Wednesday at the high-end retailer: “My daughter Ivanka has been treated so unfairly by @Nordstrom. She is a great person -- always pushing me to do the right thing! Terrible!”

The presidential dressing-down was retweeted by the official @POTUS account operated by the White House communications team.

But it was Thursday’s comments by Conway, the White House counselor, that drew criticism from a top Republican.

At the end of an interview with “Fox & Friends,” Conway lamented Ivanka Trump’s treatment in the business world and said: “Go buy Ivanka’s stuff … It’s a wonderful line, I own some of it. … I’m going to give a free commercial here. Go buy it today, everybody. You can find it online.”

The QVC-like plug drew a rebuke from House Oversight Chairman Jason Chaffetz, R-Utah, who told The Associated Press the comments were “wrong … clearly over the line, unacceptable.”

He later co-authored a letter with the committee’s top Democratic, Rep. Elijah Cummings of Maryland, to the Office of Government Ethics (OGE) on the subject that Conway's comments "raised extremely serious concerns.” 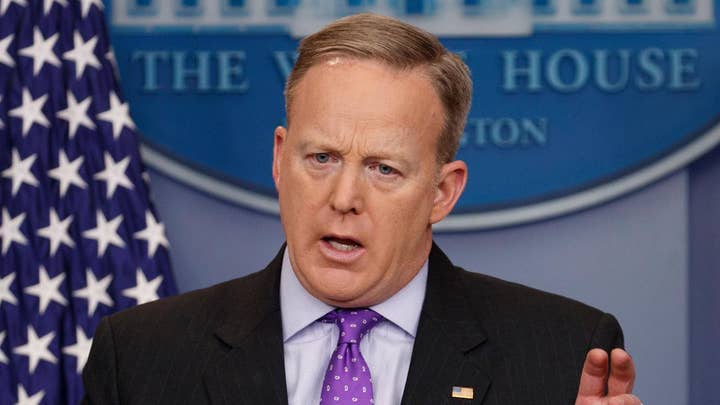 The pair ask the OGE to “review Conway’s statements and act promptly.”

Asked about the controversy surrounding Conway’s comments, White House Press Secretary Sean Spicer said at Thursday’s briefing: “Kellyanne has been counseled and that’s all we’re going to go with.”

In an exclusive interview Thursday night on "The First 100 Days", Conway said she was "not going to comment" on it.

In regards to the ethics violation letter, Conway said the White House was "aware of that letter"

"I am just really happy that I spent a lot of time with the president of the united states this afternoon and that he supports me 100 percent," Conway told Fox News' Martha MacCallum. "All I can say to women, American women at some point in your life you ought to have a boss who treated me the way that the president of the united states treated me today."

Cummings called it a “textbook violation” of ethics rules. Section 5 of the Code of Federal Regulations says government employees cannot use their “public office for ... private gain, for the endorsement of any product, service or enterprise, or for the private gain of friends, relatives,” or other associates.

Ethics experts also seized on Conway’s comments, accusing her of crossing the line.

Citizens for Responsibility and Ethics in Washington (CREW), a liberal-leaning public interest firm, called for a formal inquiry of Conway for “violating the spirit and the letter” of the law.

“This whole situation is deeply disturbing because there is too much blurring of the line between public service and the Trump family’s private business interests. People need to be confident the president and his staff are working for the public good rather than the private gain of his family,” Scott Amey, general counsel at the Project on Government Oversight, said in an email.

“If I’ve ever seen an unfair business practice, this is it. The piling on by Spicer is improper. Trump’s behavior is that of the head of a mafia family protecting his daughter, not the president of the United States,” said Norm Eisen, a former Obama ethics lawyer.

“It is a violation of federal ethics regulations prohibiting use of public office for private gain, for any government employee in an official speech, an official capacity TV interview or any similar communication,” he said in a statement. “That was strictly forbidden in the Bush administration because it is illegal.”

While Nordstrom stated the company ended its partnership with Ivanka Trump due to poor sales, Spicer echoed the president's attack on Wednesday -- asserting that Nordstrom’s decision was “clearly a targeting of her brand” and name and an effort “to undermine that name based on her father's positions on particular policies that he's taken.”

The White House did not respond to requests for comment on ethics lawyers’ criticism.

Some lawmakers want to see an additional watchdog probe.

OGE noted on its official Twitter account that they have no investigative authority. When OGE learns of a potential violation, they contact the agency involved to provide guidance.