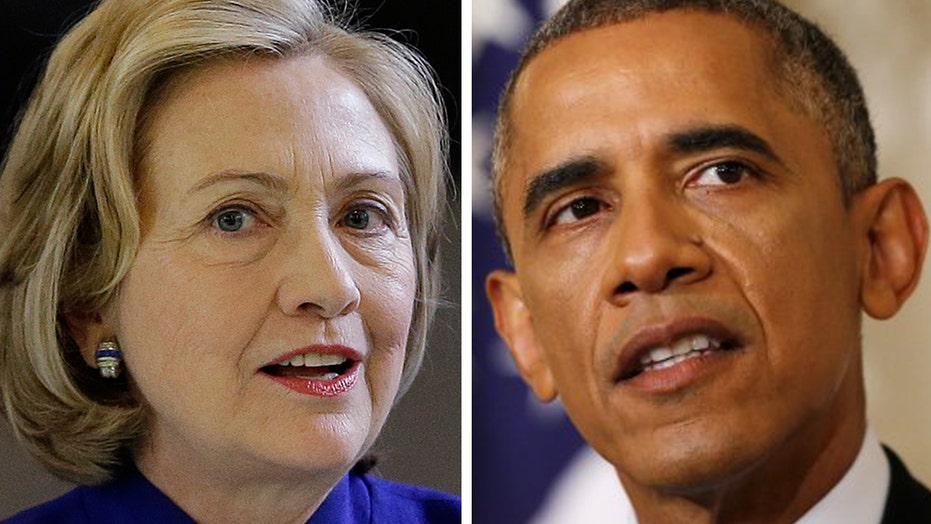 A look at the on-again, off-again political relationship between Clinton and Obama and why both sides need each other

The White House says that President Obama and first lady Michelle Obama were "happy" to see former President Bill Clinton and Hillary Clinton at an exclusive party in Martha's Vineyard Wednesday, in their first meeting after a foreign policy flap between the former Secretary of State and the president.

Deputy Press Secretary Eric Schultz said Wednesday night that the Obamas were seated next to the Clintons at the 80th birthday celebration for Ann Jordan, wife of Democratic adviser Vernon Jordan, and enjoyed the celebration.

"The President and First Lady also were happy to have the chance to spend time with Secretary Clinton and former President Clinton," Schultz said.

The party was the first encounter between the president and Hillary Clinton after a foreign policy split that has sparked renewed chatter about the duo’s often-scrutinized relationship.

The flap stemmed from an interview Clinton did with The Atlantic magazine, in which she seemed to try to set herself apart from Obama as she heads toward a possible 2016 White House bid.

However, Clinton hinted that she was ready to bury the hatchet at a bookstore signing of her memoir “Hard Choices” earlier in the day.

"We have disagreements as any partners and friends, as we are, might very well have," Clinton said.  “But I'm proud that I served with him and for him, and I'm looking forward to seeing him tonight."

Clinton’s critiques came at a particularly challenging time for Obama, with bombs falling on Iraq and disputes raging in Syria, the Mideast, Ukraine and elsewhere.  In the interview, Clinton described a more aggressive approach she would take in places like Syria and the Mideast and suggested that the president’s foreign-policy mantra of “don’t do stupid stuff” lacked sufficient depth.

After her comments came under scrutiny from people like former top Obama adviser David Axelrod, Clinton called Obama to discuss her remarks.

Deputy National Security Adviser Ben Rhodes told Fox News’ Shannon Bream on Tuesday that Clinton and Obama “reiterated that they’re in broad agreement on so many of the issues that we are confronted with around the world.”

Obama spokesman Eric Schultz on Wednesday declined to say whether the president was upset over Clinton’s critique, although he acknowledged "an honest policy difference" on the Syrian rebels.

The issue was Clinton’s biggest split with Obama since their 2008 presidential primary campaign when she questioned whether her younger Senate colleague was qualified to take a 3 a.m. phone call on a foreign policy emergency. Clinton took a more hawkish stance than Obama in that campaign, particularly on the Iraq War, but Obama put their bitter contest behind them by naming her his top diplomat.

Clinton loyally carried out Obama's foreign policy agenda for four years as secretary of state, but described some objections she raised internally in her new book, which focused on her time in the administration. She expanded on those objections in her interview, saying Obama's "failure" to fully support the rebels in Syria fueled the rise of Islamic State militants now the object of U.S. airstrikes in Iraq.