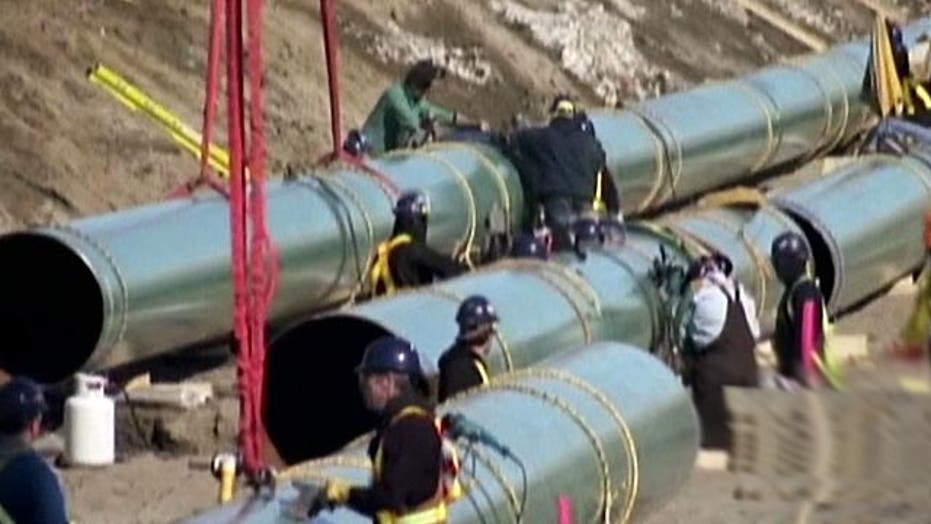 A new environmental assessment from the State Department that raised no major environmental concerns on long-delayed Keystone XL pipeline isn't the last step in deciding whether the pipeline can be built, the White House said late Friday.

The long-delayed pipeline got a major boost as it cleared a major hurdle toward approval, a serious blow to environmentalists' hopes that President Obama will block the controversial project running more than 1,000 miles from Canada through the heart of the U.S.

The White House released a statement pushing back on the notion that the pipeline is now headed for speedy approval, saying Sec. of State John Kerry and other agency heads will "closely evaluate" the report in the coming weeks.

"The president has clearly stated that the project will be in the national interest only if it does not significantly exacerbate the problem of carbon pollution," White House spokesman Matt Lehrich said.

"A decision on whether the project is in the national interest will be made only after careful consideration of the SEIS and other pertinent information, comments from the public, and views of other agency heads.”

"This report from the Obama administration once again confirms that there is no reason for the White House to continue stalling construction of the Keystone XL Pipeline," Senate Republican Leader Mitch McConnell said in a statement. "So, Mr. President, no more stalling -- no more excuses."

The Canadian government, which wants Keystone approved, also pressed the administration to act, though a final decision could be months off.

"This is the fifth federal study on the environmental impact of the Keystone XL pipeline. Each previous one has stated that building Keystone XL would not adversely affect the environment. Today's report confirms once again this result, including no appreciable impact on greenhouse gases," Natural Resources Minister Joe Oliver said in a statement. "The benefits to the U.S. and Canada are clear. We await a timely decision on this project."

Despite statements from pro-pipeline advocates, the department report stops short of recommending approval of the $7 billion pipeline. Nevertheless, the review could give Obama cover if he chooses to endorse the pipeline.

Republicans are largely united behind the project, describing it as a needed jobs creator that would have little environmental impact. But it has divided Democrats. The unions have pressed the administration to approve the project, but environmental groups have adamantly opposed it.

Foes say the pipeline would carry "dirty oil" that contributes to global warming. They also worry about a spill.

The 1,179-mile pipeline would travel through the heart of the United States, carrying oil derived from tar sands in western Canada to a hub in Nebraska, where it would connect with existing pipelines to carry more than 800,000 barrels of crude oil a day to refineries in Texas.

The State Department report effectively said Canadian tar sands are likely to be developed regardless of U.S. action on the pipeline. An official added that other options to get the oil from Canada to Gulf Coast refineries -- including rail, trucks and barges -- would be worse for climate change.

State Department approval is needed because the pipeline crosses a U.S. border. The Environmental Protection Agency and other departments will have 90 days to comment before State makes a recommendation to Obama on whether the project is in the national interest. A final decision by the government is not expected before summer.

The new report comes only days after Obama's State of the Union address, in which he reiterated his support for an "all-of-the-above" energy strategy that embraces a wide range of sources, from oil and natural gas to renewables such as wind and solar power. The remarks were a rebuff to some of his environmental allies who argued that Obama's support of expanded oil and gas production doesn't make sense for a president who wants to reduce pollution linked to global warming.

"We believe that continued reliance on an `all-of-the-above' energy strategy would be fundamentally at odds with your goal of cutting carbon pollution," the environmentalists wrote in a letter to Obama.

Obama blocked the Keystone XL pipeline in January 2012, saying he did not have enough time for a fair review before a looming deadline forced on him by congressional Republicans. That delayed the choice for him until after his re-election.

Obama also said in a New York Times interview last year that there was "no evidence" the pipeline would be a "big jobs generator," claiming it might create 2,000 jobs in the construction phase and far fewer permanent jobs.

But pipeline supporters have challenged that claim. House Speaker John Boehner said it could create "more than 100,000 jobs," citing separate analyses which include indirect jobs.

"President Obama is out of excuses," Boehner said Friday.

Obama's initial rejection of the pipeline went over badly in Canada, which relies on the U.S. for 97 percent of its energy exports. The pipeline is critical to Canada, which needs infrastructure in place to export its growing oil sands production. The northern Alberta region has the world's third largest oil reserves, with 170 billion barrels of proven reserves.

In a bid to smooth over relations with Canada and other pipeline supporters, Obama quickly suggested development of an Oklahoma-to-Texas line to alleviate an oil bottleneck at a Cushing, Okla., storage hub. Oil began moving on that segment of the pipeline last week.

The 485-mile southern section of the pipeline operated by Calgary-based TransCanada did not require presidential approval because it does not cross a U.S. border.

The latest environmental review, the fifth released on the project since 2010 -- acknowledges that development of tar sands in Alberta would create greenhouse gases. But the report makes clear that other methods of transporting the oil -- including rail, trucks and barges -- would release more greenhouse gases that contribute to global warming than the pipeline.

U.S. and Canadian accident investigators warned last week about the dangers of oil trains that transport crude oil from North Dakota and other states to refineries in the U.S. and Canada. The officials urged new safety rules, cautioning that a "major loss of life" could result from an accident involving the increasing use of trains to transport large amounts of crude oil.

Several high-profile accidents involving crude oil shipments -- including a fiery explosion in North Dakota and an explosion that killed 47 people in Canada last year -- have raised alarms. Keystone XL would travel through Montana and South Dakota before reaching Nebraska. An existing spur runs through Kansas and Oklahoma to Texas.