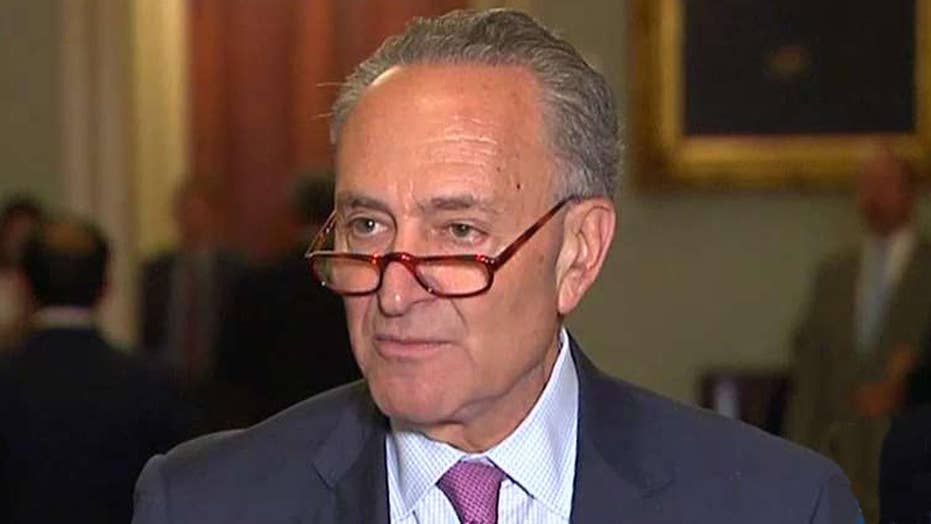 Schumer: The Republican bill is rotten at the core

Senate Minority Leader addresses the delay in the healthcare vote

The White House is accusing Senate Democrats of “needless obstruction” of President Trump’s nominees to numerous government positions, complaining that former President Barack Obama had far more nominees confirmed at this point of his presidency.

White House legislative affairs director Marc Short argued during Monday’s press briefing that the stalled nominations were jeopardizing national security and accused Democrats of playing to its “radical left-wing base.”

“In an effort to prevent President Trump from following through on the policies for which the American people voted, Senate Democrats are putting his nominations through time-consuming parliamentary procedures not seen by the previous administration,” the White House said in a statement.

The White House released figures Monday showing the Senate has confirmed less than a quarter of President Trump's 216 nominations while the Senate confirmed 69 percent of Obama’s 454 nominations before the August recess his first year in office.

The numbers, however, make clear that both the Trump administration and Senate have been historically slow in dealing with nominations.

Matt House, communications director for Senate Minority Leader Chuck Schumer, D-N.Y., said in a statement that the “White House has only itself to blame for the slow pace at which they’ve filled vacant administration posts.”

“Thus far, the nomination process has been defined by the failure of the Trump administration to submit names for hundreds of vacant jobs, incomplete and delayed ethics and nominations paperwork from the nominees themselves, and repeated withdrawals of nominees for key positions,” he said.

But the Senate is sitting on dozens of nominations that have been submitted.

According the press secretary’s office, the Senate has confirmed 48 of Trump’s 197 agency nominations. The White House said only two of Trump’s 23 judicial nominations have been confirmed.

Other positions not yet confirmed by the Senate include solicitor general, assistant attorney general, director of the U.S. Citizenship and Immigration Services and deputy secretary of Health and Human Services.