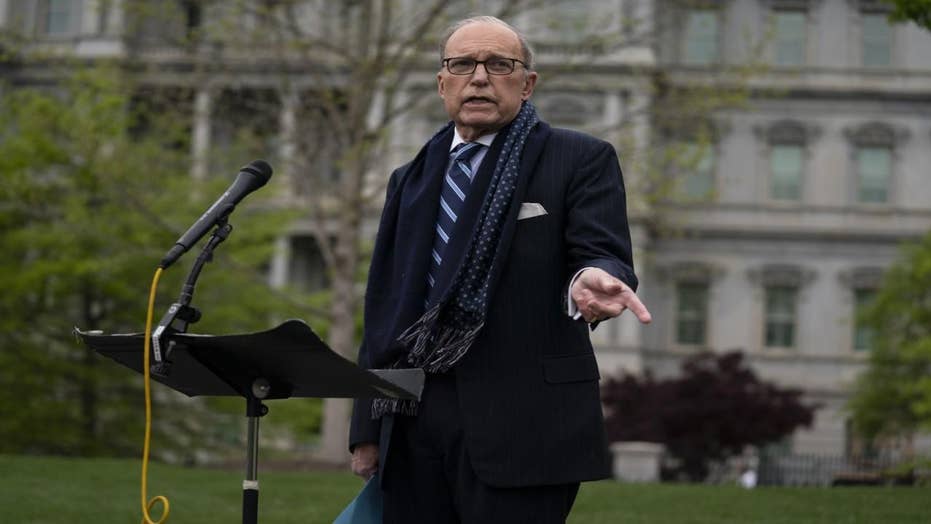 Kudlow: The spirit to go back to work is there

National Economic Council Director Larry Kudlow argues the worst of the coronavirus pandemic is over and the U.S. economy is getting ready to reopen. He also discussed the GDP drop and Gilead's progress in Remdesivir as a treatment.

The White House and Congress reacted to a historic contraction in the U.S. economy Wednesday following the release of GDP numbers showing that the economy shrank by 4.8 percent in the first quarter of 2020 amid the coronavirus pandemic – a decline that is the worst since the same time period of 2009 and marks the first time the size of the economy has decreased since 2014.

Gross domestic product, the broadest measure of goods and services produced across the economy, fell at a seasonally adjusted annual rate of 4.8 percent in the three-month period from January through March, the Commerce Department said Wednesday.

"The GDP numbers today show difficulty and hardship but are not surprising as Americans continue to help slow the spread of this unforeseen virus," White House spokesman Judd Deere told Fox Business.

A cyclist wearing a protective mask to protect against coronavirus is reflected in the window of a wedding dress store with mannequins wearing face masks, in Zagreb, Croatia, Thursday, April 23, 2020. The store is closed because of Covid-19 lockdown. (AP Photo/Darko Bandic)

He continued: "Every action President Trump has taken throughout this pandemic has been to ensure we emerge healthy, stronger and with a growing, prosperous economy. The president’s bold policies of low taxes, deregulation, reciprocal trade and energy independence took this economy to record-setting historic highs, and they will do so again as the president has placed us on a responsible path to reopen soon."

The decline, which was precipitated by widespread shutdowns of portions of the economy through stay-at-home orders issued by governors, in accordance with social distancing guidelines issued by the White House, was largely driven by a decrease in consumer spending. Such spending fell at a seasonally adjusted rate of 7.6 percent, which is the largest such decline since the second quarter of 1980.

House Speaker Nancy Pelosi, D-Calif., also reacted to the numbers in an interview with CNBC Wednesday, noting that despite the economic numbers many Americans are resistant to reopening the economy immediately due to health concerns.

HALF OF ALL AMERICANS FINANCIALLY IMPACTED BY CORONAVIRUS: POLL

"The polls show that the American people are wiser than anyone, overwhelmingly, six-to-one, seven-to-one, they say that we should not go out there any sooner than ready and that we should not end the social distancing because of the risk involved to their health," she told CNBC's "Squawk on the Street."

"We operate in three categories. One, the lives of the American people. Two, the livelihood of the American people. Not in any particular order but the lives come first. And then, third, the life of our democracy. So as we go forward all of these are connected ... and the people's will to say 'I'm not going, I don't wanna go out there until I feel some confidence.' Because if you go out there, you bring home what you bring back to your family and your children."

Pelosi, in the interview, also discussed efforts to pass another stimulus package that would aid state and local governments and the disparity between white-collar workers who can easily transition to work-from-home and middle-class and lower-income workers who cannot.

Meanwhile, White House economic adviser Larry Kudlow told Fox Business that despite robust efforts from the federal government, the economy is going to get worse before it gets better.

"We've basically put in about $9 trillion worth of assistance, roughly $3 trillion on the budget side and the remainder on the Federal Reserve side," he said. "So I think the economy is going to suffer through very bad numbers, you saw some of it today. It's going to be worse in the second quarter, the unemployment rate is going to go up, it's a very serious matter. There's a lot of hardship there."

But Kudlow also expressed optimism for an economic recovery later this year.

"As the president said yesterday ... I think the worst of the pandemic is over, we have our phases, our guideline phases one, two and three," he said. "The point is I think folks are getting ready not only to reopen the economy but to get back to work OK. I think that's the key. The spirit is there."

Kudlow also discussed other efforts he hopes to see to grow the economy in the long term, not with a direct stimulus but with incentives that would encourage economic growth headed into 2021.