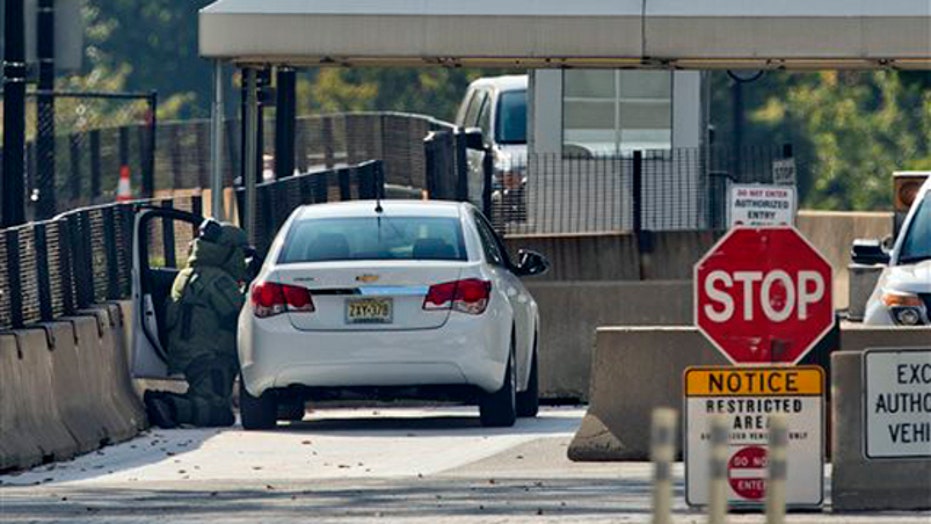 Another attempted security breach at the White House

The White House intruder who jumped a security fence on Friday and got inside the presidential mansion was carrying a knife, according to the criminal complaint obtained by Fox News and contrary to initial reports that the man was unarmed.

According to the complaint filed in federal court, 42-year-old Omar J. Gonzales, of Copperas Cove, Texas, had a concealed black folding knife when Secret Service agents apprehended him inside the north White House door that faces Pennsylvania Avenue.

After he was arrested, he told a Secret Service agent that "he was concerned the atmosphere was collapsing and needed to get the information to the President of the United States so he could get the word out to the people," the document says.

The incident Friday occurred at 7:20 p.m. on the north side of the White House, along Pennsylvania Avenue, about four minutes after President Obama, his two daughters and a friend departed in helicopter Marine One from the South Lawn for a weekend trip to Camp David.

The security breach was followed less than 24 hours later by a New Jersey man driving up to a White House gate and refusing to leave, and Secret Service Director Julia Pierson saying enhanced security and surveillance were put in place overnight and that she has ordered a full investigation of the Friday night security breech

The incident Saturday occurred at about 3 p.m. when the man approached one of the White House gates on foot. He later showed up at another gate in a car and pulled into the vehicle screening area, said agency spokesman Ed Donovan.

When the man refused to leave, he was placed under arrest and charged with unlawful entry. The suspect has been identified as Kevin Carr, from Shamong, N.J.

Just hours after the Saturday arrest, Secret Service Director Julia Pierson said security and surveillance capabilities along the Pennsylvania Avenue fence line had been increased overnight. And she announced that she has ordered the agency’s Office of Professional Responsibility to conduct a “comprehensive, after-action review of the incident.”

The findings will be submitted to Department of Homeland Secretary Jeh Johnson.

“The location of Gonzalez’s arrest is not acceptable,” Pierson said. Her announcement made no reference to the second arrest.

White House spokesman Frank Benenati said within minutes of Pierson’s announcement that the president has “full confidence in the Secret Service and is grateful to the men and women” protect him, his family and the White House.

Benenati also said the White House is certain the review will be done “with the same professionalism and commitment to duty” that all Americans expect from the Secret Service.

A former agent told Fox News earlier Saturday that if an intruder is not armed, then agents are “not supposed to shoot him."

The ex-agent also said a sure-footed intruder can jump the fence and reach the White House front doors in about five seconds, especially if he or she enters between the two front-gate command posts.

Gonzalez was arrested and taken to George Washington Hospital for medical evaluation, said agency spokesman Brian Leary. He also said Gonzalez ignored commands to stop and continued through the doors.

On Saturday morning, law enforcement officials conducted a shoulder-to-shoulder sweep of the White House’s north lawn as well as the plaza in front of the iconic building and adjacent Lafayette Park, searching for evidence in connection with the Friday incident.

The breach Friday triggered a rare evacuation of much of the White House, with Secret Service officers drawing their guns as they rushed staffers and journalists out a side door.

It also prompted fresh questions about the storied agency and its ability to protect the president.

Rep. Jason Chaffetz, R-Utah, chairman of a House subcommittee on national security oversight, initially called the incident "totally unacceptable" and just one in a series of security failings on the Secret Service's watch.

On Saturday afternoon, he sounded no less if not more concerned.

"You jump the fence, you're going to get shot," he said. "People are going to jump the fence. But to make it unimpeded all the way into the White House is unacceptable. ... The front door was wide open. ... I have a lot of questions for (Secret Service) leadership."

On Saturday, Bomb technicians, fully suited, could be seen looking through a white four-door sedan with New Jersey plates and pulling out what appeared to be keys. Streets near the White House were temporarily closed as officers responded, but the White House was not locked down.

Although it's not uncommon for people to make it over the White House fence, they're typically stopped almost immediately and rarely get very far. Video from the scene showed the intruder sprinting across the lawn as Secret Service agents shouted at nearby pedestrians to clear the area.

"This situation was a little different than other incidents we have at the White House," Donovan said. "There will be a thorough investigation into the incident."

It was unclear this weekend whether any other fence-jumpers have ever made it into the White House, one of the most highly protected buildings in the world. But Friday's incident was just the latest setback for an elite agency whose reputation has suffered a succession of blows in recent years.

In 2012, 13 Secret Service agents and officers were implicated in a prostitution scandal during preparations for Obama's trip to Cartagena, Colombia. The next year, two officers were removed from the president's detail after another alleged incident of sexually-related misconduct. And in March, an agent was found drunk by staff at a Dutch hotel the day before Obama was set to arrive in the Netherlands.

Obama appointed the agency's first female director last year as a sign he wanted to change the culture and restore public confidence in its operations. An inspector general's report in December found no evidence of widespread misconduct.

The Secret Service has struggled in recent years to strike the appropriate balance between ensuring the first family's security and preserving the public's access to the White House grounds. Once open to vehicles, the stretch of Pennsylvania Avenue in front of the White House was confined to pedestrians after the Oklahoma City bombing, but officials have been reluctant to restrict access to the area further.

Evacuations at the White House are extremely rare. Typically, when someone jumps the White House fence, the compound is put on lockdown and those inside remain in place while officers respond. Last week, the Secret Service apprehended a man who jumped over the same stretch of fence on the anniversary of the Sept. 11 attacks, prompting officers to draw their firearms and deploy service dogs as they took the man into custody.