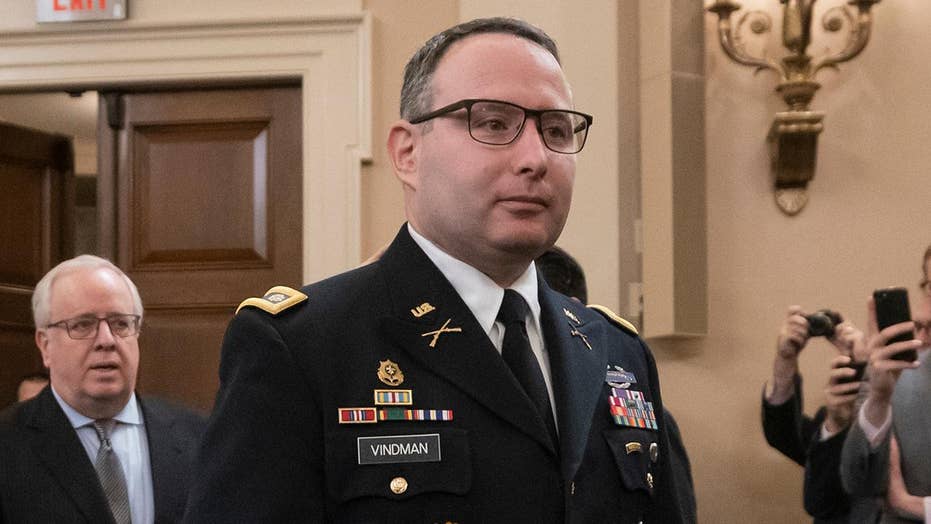 The White House is reportedly weighing options to dismiss Lt. Col. Alexander Vindman from the National Security Council (NSC) in an effort to shrink its foreign policy bureaucracy, a report said.

Bloomberg reported that the White House plans to frame it as part of an NSC staff downsizing, not a retaliation. Vindman gave testimony last year during President Donald Trump's impeachment proceedings.

Vindman was an important witness for the Democrats in July and raised concerns over Trump's phone call with Ukraine president Volodymyr Zelensky.

National Security Council aide Lt. Col. Alexander Vindman is sworn in to testify before the House Intelligence Committee on Capitol Hill in Washington, Tuesday, Nov. 19, 2019, during a public impeachment hearing of President Donald Trump's efforts to tie U.S. aid for Ukraine to investigations of his political opponents. (AP Photo/Andrew Harnik)

Vindman had drawn applause from spectators during his testimony before the House Intelligence Committee -- after expressing his love for America when asked how he overcame his fear of retaliation.

"Congressman, because this is America. This is the country I have served and defended, that all of my brothers have served. And here, right matters," Vindman said. "I knew I was assuming a lot of risk. [My father] deeply worried about [my testimony]. Because in his context, it was the ultimate risk."

CNN reported that Vindman has been telling colleagues that he expects to be leaving the NSC and return to work at the Department of Defense.

His departure is expected to be soon after Trump was acquitted in the Senate impeachment trial.