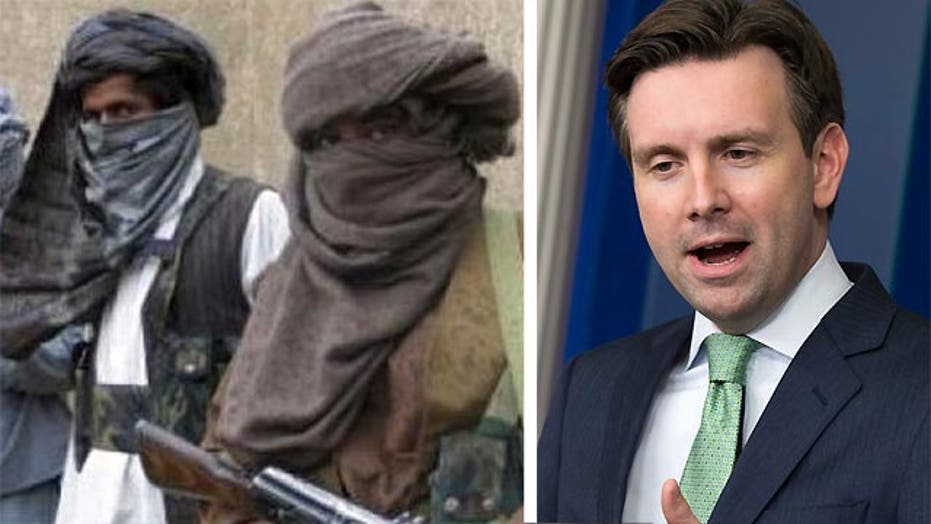 In Obama's White House, if it quacks like a terrorist, it's not necessarily a terrorist, as White House spokesman tries to explain why the Taliban is not a terror group. Karl Rove sounds off.

With apologies to ducks ...

If it quacks like a terrorist, isn't it one?

The White House once again Thursday agonized to draw a fine-tuned distinction between the Taliban and terror networks like Al Qaeda, even as Press Secretary Josh Earnest acknowledged that, technically, the Taliban are still on an official terrorist list.

The Obama administration is being pressed on the distinction because of a potential prisoner swap between the Islamic State and Jordan. The White House, without giving Jordan advice on what to do, has said the U.S. government does not negotiate with terrorists -- yet last year, the Obama administration traded five Taliban fighters held at Guantanamo for Army Sgt. Bowe Bergdahl.

On Wednesday, a White House spokesman said that was different, in part because the Taliban are an "armed insurgency," not necessarily a terror group.

Earnest acknowledged that listing on Thursday.

But then it got complicated.

Earnest explained, "They do carry out tactics that are akin to terrorism, they do pursue terror attacks in an effort to try to advance their agenda."

He said the Treasury designation allows the U.S. to impose financial sanctions against Taliban leaders.

However, he said the Taliban nevertheless are different from a group like Al Qaeda, in that the Taliban "have principally been focused on Afghanistan."

Earnest continued, "Al Qaeda is a terrorist organization that has aspirations that extend beyond just the border between Afghanistan and Pakistan."

The U.S. government has long viewed the Taliban through a different lens than it views groups like Al Qaeda.

But the effort to reject comparisons between the Taliban-Bergdahl trade and negotiations with terrorists like the one between Jordan and ISIS has drawn criticism in Congress.

"I would suggest that this administration start talking to any of the service members who fought in Afghanistan, who might have been injured or seen their friends hurt or killed, and ask them if the Taliban is a terror organization," he said in a statement on Thursday. "The administration might actually learn something and stop looking so foolish."

Hunter also has noted that Bergdahl was held at one point by militants with the Taliban-aligned Haqqani network, which technically has been declared a terror group.

In another Taliban-related development, a U.S. official told Fox News Thursday that one of the five prisoners traded for Bergdahl had since reached back out to the Taliban.

The Bergdahl trade is back in the headlines following claims that the Army may be preparing to charge him with desertion. The Pentagon and Army have adamantly denied the claims, saying no decision has been reached.

On Thursday, Earnest drew another distinction between the Jordan-ISIS discussion, and last year's trade. He noted that those talks were done using the Qatari government as an intermediary.