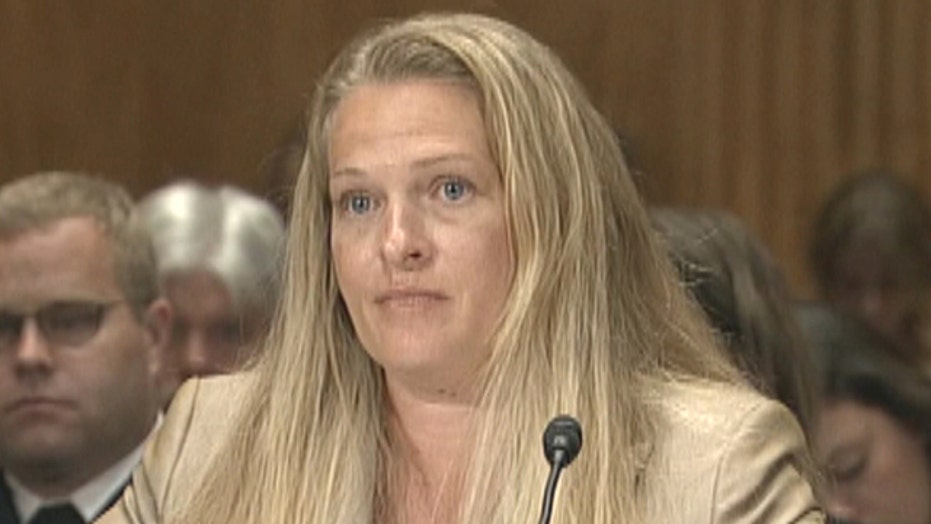 A Department of Homeland Security whistleblower testified Thursday that the "retaliation" against her for probing a controversial visa program was so extensive she was told she couldn't "carry or own a personal weapon" -- a step she described as a constitutional rights violation, and just one of several ways she was punished for speaking out.

Taylor Johnson, a senior special agent in the Homeland Security Investigations division of Immigration and Customs Enforcement, testified at a Senate hearing alongside whistleblowers from several other agencies who claim to have faced similar harassment.

Johnson told lawmakers she ran into resistance after investigating the so-called EB-5 program, which offers visas to investors. She said she looked into the program over concerns about security risks, questioning whether visas were being approved with little scrutiny.

But Johnson said her managers began to hear complaints about her queries. Soon, she was removed from the investigation, and the case was closed.

From there, it got worse.

Johnson told the Senate Homeland Security Committee her "weapon and credentials" were taken, her government vehicle was confiscated, and her access to the building where she worked and government databases was revoked.

Further, she said, "I was told I couldn't even carry or own a personal weapon, which is a constitutional rights violation."

Johnson also asserted that when a social worker tried to verify her employment, the worker was told Johnson had been terminated over a "criminal offense."

Choking up, Johnson testified, "I almost lost my 1-year-old-child."

She wasn't terminated, though. Instead, Johnson said she was told to report to another building that houses inmates and processes parolees. She said she was "held a hostage by my own agency."

"Agents and officers need to be valued by management, not punished, when they disclose factual and important information to our leadership," Johnson said.

The Homeland Security Department says ICE does not restrict an individual's right to carry a personal firearm, and that is up to the laws of the state where a person lives.

But asked Thursday for comment on Johnson's claims, a DHS spokeswoman said they do not comment on "specific personnel matters." The official stressed that the department takes whistleblower protection "very seriously" and protects their rights to engage in "protected activity."

The EB-5 program has come under criticism before, and Johnson was hardly the only official with questions about it. A recent inspector general report concluded Homeland Security Deputy Secretary Alejandro Mayorkas violated ethics rules by intervening as head of USCIS several times in EB-5 visa cases involving prominent Democrats. He has since said, "I regret the perception my own involvement created."

DHS now says the EB-5 program is safer and more secure thanks to changes over the last several years.

Beyond Johnson's experience, Army Lt. Col. Jason Amerine also testified Thursday that he was punished after speaking out on the "dysfunctional bureaucracy" holding back efforts to free American hostages overseas. He said after he made these disclosures to Congress, the Army suspended his clearance, removed him from his job and tried to court martial him.

A former top official in the Social Security Administration also testified on the backlash he faced.

Michael Keegan, former associate commissioner for facilities and supply management, said he had concerns after being assigned in early 2012 to oversee a replacement computer data center, funded by $500 million in taxpayer money.

He said he raised the issue that while SSA was allegedly telling Congress it needed to replace its entire National Computer Center in Maryland, "at most" only part of it needed to be replaced -- specifically, the part housing the main data center.

After he began raising concerns, Keegan said he was removed from his position and "left to languish in an empty office space."

"Nothing has been shown by SSA that I deserved this retaliation," Keegan said.

Keegan last year also blew the whistle on another controversy, claiming officials at SSA tried to hide a damning report on a $300 million computer system in order to protect President Obama's nominee to lead the agency.

Keegan ended up retiring from SSA earlier than planned, though he says he was not financially prepared to retire. He described the drain of "staring at a wall, watching the clock tick," calling it "death by a thousand cuts."

"The cost has been inordinate and enormous," he said.