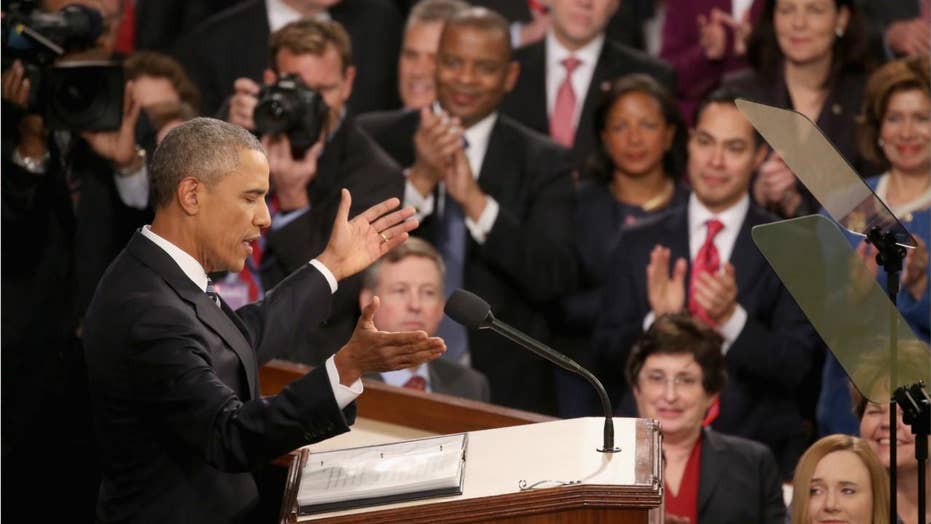 The president’s State of the Union address, an annual tradition now broadcast on every major broadcast and cable news channel, is nearly as old as the republic itself, but it was not always the ceremonial event it is today.

Taking its inspiration from Article II of the Constitution, which says the president “shall from time to time give to the Congress Information of the State of the Union, and recommend to their Consideration such measures as he shall judge necessary and expedient,” the speech’s history dates back to Jan. 8, 1790, when President George Washington delivered the first one, less than a year into his first term.

(Original Caption) President Truman appearing before a joint session of the new Republican controlled Congress is shown here to deliver his annual State of the Union message. He recommended a strong and sweeping legislative program to halt disastrous labor strife and called upon the G.O.P. Congress to work with him for the common good.

Today, it is common practice for the president to report on the State of the Union with an in-person address before both chambers of Congress.

Presidents Washington and John Adams did the same for the first 12 of them. That changed for more than a century when President Thomas Jefferson opted to send separate messages to the House and Senate, according to the House of Representatives’ History, Art & Archives website.

That written tradition continued until 1913, when President Woodrow Wilson revived the practice of giving in-person speeches, although he opted for written addresses in 1919 and 1920. Written messages were also used from 1924-1932 at various points. The most recent State of the Union address that was not done in person occurred in 1981, by President Jimmy Carter.

Bill Clinton waving, on the floor of House of Representatives, to deliver the State of Union address.

The address, either in writing or in person, was given every December until 1934, when it changed to every January or February. In recent decades, however, presidents have opted not to give a State of the Union address in the first year of their presidency. Instead, some gave policy-driven speeches to Congress focusing on specific topics, such as economy-based messages delivered by President Bill Clinton in 1993, George W. Bush in 2001 and Barack Obama in 2009.

Technological advances eventually allowed the State of the Union to reach a wider audience, with Calvin Coolidge’s 1923 speech being the first broadcast on the radio, Truman appearing on television in 1947, and George W. Bush streaming live online in 2002.

U.S. President Donald Trump delivers his State of the Union address to a joint session of the U.S. Congress on Capitol Hill in Washington, U.S. January 30, 2018. REUTERS/Jonathan Ernst

As a matter of procedure, because the address is given before a joint session of Congress, the president is invited to appear by the Speaker of the House. Speaker Nancy Pelosi has formally invited President Trump to deliver this year’s address on Tuesday night.

Trump will join Clinton as the only presidents to deliver the address after being impeached.