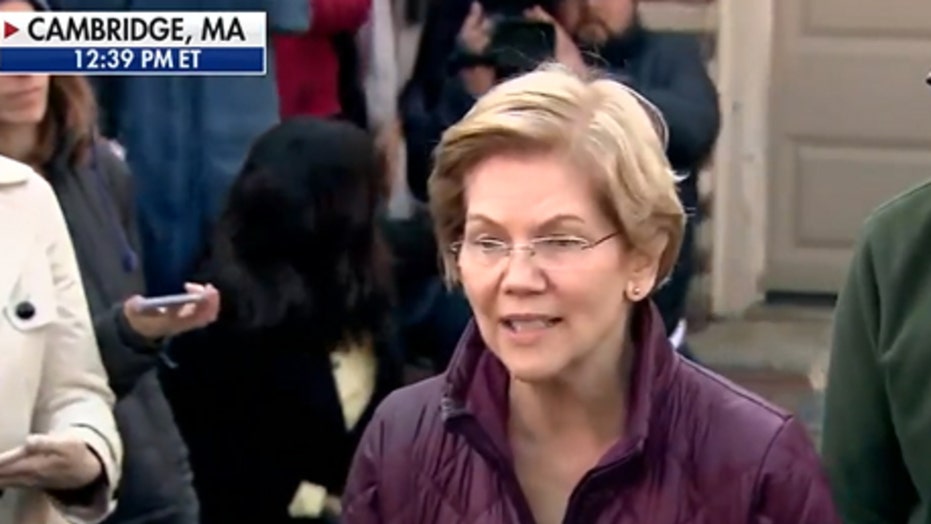 Warren: Don’t have to decide who to endorse at this minute

Elizabeth Warren, former presidential candidate, makes a statement and answers questions after dropping out of the 2020 race

CAMBRIDGE, Mass. -- Sen. Elizabeth Warren dropped out of the 2020 presidential race Thursday after a disappointing Super Tuesday in which she failed to win even her home state -- a development that could boost Vermont Sen. Bernie Sanders' campaign by making him the lone progressive standard-bearer in the Democratic field.

But, while making the widely expected announcement outside her Cambridge home with her husband Bruce by her side, the Massachusetts senator declined to make an endorsement at this stage.

"Not today," Warren said, noting that she wanted more time to think about the decision.

The non-decision was striking, considering every other candidate to bow out in the last week has endorsed -- for former Vice President Joe Biden. Warren was considered closer to Sanders, at least ideologically, but they had clashed in recent weeks and it remains unclear whether Warren is leaning toward one candidate or the other.

"I will not be running for president in 2020, but I guarantee I will stay in the fight for hardworking folks across this country who've gotten the short end of the stick over and over," she vowed moments earlier. Appearing to choke up, she also spoke to how the presidential field is now male-dominated -- with the exception of Rep. Tulsi Gabbard -- and the prospects for a history-making first female president are essentially gone.

"One of the hardest parts of this is all those pinky promises and all those little girls who are gonna have to wait four more years," Warren said, her voice cracking, referring to promises she often makes with young girls on the campaign trail about women running for president. "That's gonna be hard. ... I take those pinky promises seriously."

Her exit essentially leaves the race as a one-on-one battle between Sanders and Biden, who is surging after claiming a stunning 10 victories on Super Tuesday. Warren first revealed the decision in a late-morning, all-staff call on Thursday.

"I want all of you to hear it first, and I want you to hear it straight from me: today, I’m suspending our campaign for president," Warren told staffers on the call. "What we have done – and the ideas we have launched into the world, the way we have fought this fight, the relationships we have built – will carry through, carry through for the rest of this election, and the one after that, and the one after that."

Warren also tweeted Thursday afternoon, thanking her supporters and delivering an optimistic message. Linked in the tweet were the comments she shared with her campaign staff.

"Our work continues, the fight goes on, and big dreams never die," Warren said. "From the bottom of my heart, thank you."

Warren's move, first reported by The New York Times, comes after a disappointing performance on the biggest day of primary voting. Moderate candidates Pete Buttigieg and Amy Klobuchar already had dropped out in the days before, boosting Biden to a delegate lead and essentially co-frontrunner status with Sanders. Billionaire Mike Bloomberg, another moderate, dropped out of the race on Wednesday and endorsed Biden.

Pressure from the left swiftly grew on Warren to drop out, in order to help Sanders consolidate progressive support.

But Sanders wasn't the first presidential candidate to publicly congratulate Warren on her run Thursday. Biden beat him to it, praising her work on behalf of the working class.

"Senator @EWarren is the fiercest of fighters for middle class families," Biden said. "Her work in Washington, in Massachusetts, and on the campaign trail has made a real difference in people's lives. We needed her voice in this race, and we need her continued work in the Senate."

Sanders tweeted after the public announcement: "[Warren] has taken on the most powerful corporate interests because she cares about those who have been left behind. Without her, the progressive movement would not be nearly as strong as it is today. I know that she'll stay in this fight and we are grateful that she will."

The Warren campaign had shared a message with supporters on Wednesday that indicated she might be considering leaving the race.

"Last night, we fell well short of our viability goals and projections, and we are disappointed in the results," wrote campaign manager Roger Lau. "All of us have worked for Elizabeth long enough to know that she isn’t a lifetime politician and doesn’t think like one. She’s going to take time right now to think through the right way to continue this fight. There’s a lot at stake for this country and the millions of people who are falling further and further behind.

"This decision is in her hands, and it’s important that she has the time and space to consider what comes next," Lau continued.

Hawaii Rep. Tulsi Gabbard remains in the race, but has performed poorly in the primaries.

Warren had earned 65 delegates to the Democratic National Convention as of Thursday morning -- far fewer than either Biden or Sanders who each had over 500 delegates after their Super Tuesday showings.

President Trump commented on Warren's post-Super Tuesday exit from the Democratic primary race, speculating that because she apparently split the progressive vote with Sanders on the biggest day of the primary campaign that she may eventually cost the democratic socialist senator the nomination.

"Elizabeth 'Pocahontas' Warren, who was going nowhere except into Mini Mike’s head, just dropped out of the Democrat Primary...THREE DAYS TOO LATE," Trump tweeted. "She cost Crazy Bernie, at least, Massachusetts, Minnesota and Texas. Probably cost him the nomination! Came in third in Mass."

Former presidential candidate Julian Castro, who had endorsed Warren after he dropped out, tweeted a message of gratitude at the Massachusetts senator.

"I endorsed @ewarren because she’s the best for the job," Castro said. "She’s a relentless fighter, uniquely thorough, and inspired many with a hopeful & courageous vision. I’m so thankful for her campaign. I hope the remaining candidates work to capture what she achieved. ¡Ganaremos un día!"

Klobuchar also heaped praise on her former presidential competitor and current Senate colleague, as did Andrew Yang, who dropped out of the presidential race after the New Hampshire primary.

"My friend @ewarren knows how to dream big and fight hard," Klobuchar tweeted. "She is a leader in fighting for change, and an inspiration to women across this country. I look forward to continuing to work with her in the Senate and beyond. #Persist !"

Warren arrived home in Massachusetts late Tuesday night – after not only failing to win a single state on a night when one-third of all the Democratic presidential convention delegates were up for grabs, but placing a devastating third in her home state of Massachusetts.

Warren hasn't endorsed Sanders or Biden, but she did speak with both candidates on Wednesday. She is said to be assessing who would best uphold her agenda.

Late last month, Warren avoided answering a question about teaming up with Sanders, but emphasized that she is friends with Sanders.

"I think Bernie and I have been friends for the last, gosh, how many years? I don't even know how far back it goes. We already or friends," she said.

The progressive lawmaker – a co-front-runner with Biden for the nomination late last summer and early autumn – saw her fortunes wane after intense scrutiny from the media and incoming fire at the debates from her rivals over her record and her explanations on how she would implement and pay for her proposals for a government-run single-payer "Medicare-for-all" health care system.

Her downward spiral intensified the past three weeks after a very disappointing fourth-place finish in neighboring New Hampshire, followed by distant finishes in Nevada’s caucuses and Saturday’s primary in South Carolina.

The Associated Press contributed to this report. Tyler Olson reported from Washington, D.C.