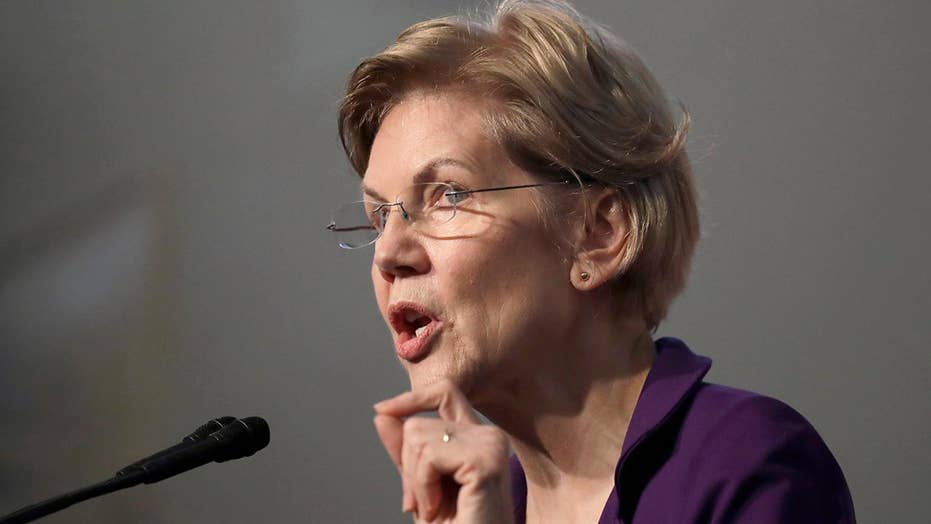 Democratic presidential candidate Sen. Elizabeth Warren brought in $21.2 million during the October-December quarter of fundraising  – a haul that’s down nearly $3.5 million from the previous three months.

The new fourth-quarter fundraising numbers from the populist senator from Massachusetts – announced by her presidential campaign Friday – come as Warren has experienced a dip in support in her national and early voting state poll numbers the past couple months.

And Warren’s haul, while still substantial, trails the three other top-tier contenders for the Democratic presidential nomination.

Warren appeared to scramble to top the $20 million mark in the fourth quarter, as her campaign made the unusual move of releasing its pending total early in order to drum up more cash.

“So far this quarter, we’ve raised a little over $17 million. That’s a good chunk behind where we were at this time last quarter,” an email sent last Friday from the Warren campaign read. "Elizabeth Warren needs your help. Right now. The goal is $20 million for the quarter — that's how much the campaign needs to keep our plans on track.”

The gambit paid off.

Warren’s campaign emphasized that they raised over $1.5 million on Dec. 31, their best fundraising day to date.

“A few days before Tuesday's quarterly FEC fundraising report, we leveled with you. We shared that we were still a good chunk behind our third quarter fundraising and set a goal of $20 million goal by December 31, which was what we'd need to raise to keep our plans on track,” noted campaign manager Roger Lau in an email to supporters on Friday.

“Well today, I'm excited to share some great news with you. Thanks to supporters like you who stepped up and chipped in, we beat our goal,’ he added.

Touting their grassroots appeal, the campaign highlighted that more than 443,000 people made almost 900,000 donations during the fourth quarter, with an average contribution of just $23. And for the year, the noted that nearly 1 million donors gave more than 2.7 contributions to raise more than $71 million.

Asked by Fox News on Thursday following a campaign event in New Hampshire if she was concerned about Sanders' eye-popping fundraising figures, Warren avoided directly answering. Instead, she said that she’s “grateful to everyone who's pitched in five bucks or 15 bucks over the last few days I was making calls to donors to thank them personally for doing this.”

And she spotlighted that “I didn't spend one single minute selling access to my time to millionaires and billionaires. I did this grassroots all across the country. And I'm proud of the grassroots army that we've built.”

Unlike their top-tier rivals, Warren and Sanders have eschewed holding fundraisers with top-dollar donors, often at ritzy settings. Instead, they are powering their campaigns with small-dollar, mostly online, contributions.

Warren’s report came hours after Sen. Amy Klobuchar of Minnesota announced that she raised $11.4 million the past three months – her best haul to date. A day earlier, Andrew Yang, a long shot for the nomination who’s risen in the polls and consistently made the debate stage, announced that he raised $16.5 million the past three months, far outpacing his $10 million third-quarter figure.

Campaigns wanting to showcase their fundraising figures are blasting out their final numbers this week, with campaigns with lackluster cash hauls likely waiting until the end of January deadline to report their figures to the Federal Election Commission.

Campaign cash, along with public opinion polling, is a crucial barometer of a candidate’s popularity and a campaign’s strength. Fundraising dollars can be used to run TV, radio and digital ads, beef up grassroots voter outreach, and build up staff. And the fourth quarter fundraising figures – the last quarterly report before Iowa kicks off the primary and caucus presidential nominating calendar on Feb. 3 – will be heavily scrutinized by political pundits.