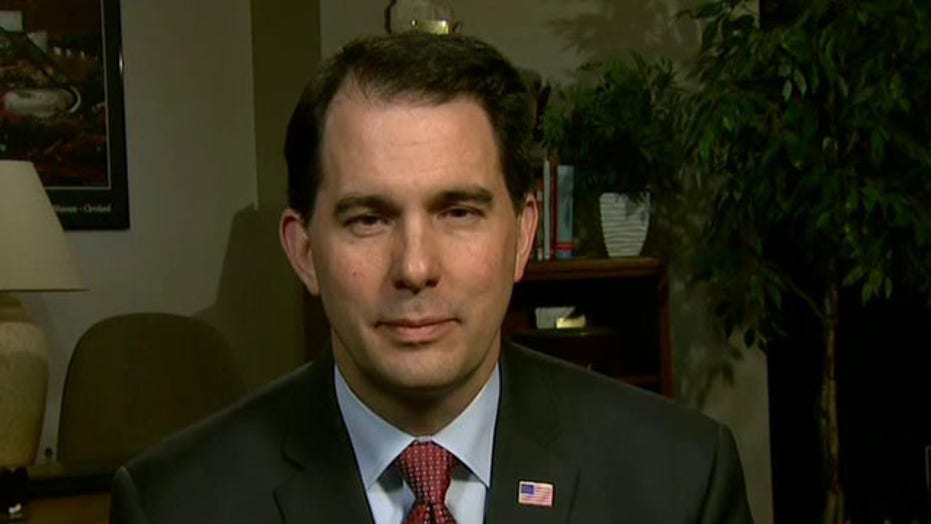 Walker told ABC’s “This Week” that he wouldn’t rule out sending troops, as Islamic State appears to grow and strengthen despite U.S.-led efforts to destroy the radical Islamic group.

“I wouldn't rule out anything,” Walker said. “When you have the lives of Americans at stake ... we have to be prepared to do things that don't allow those measures, those attacks, those abuses to come to our shores."

In a wide-ranging interview in which Walker also made a case for a potential 2016 run, he suggested an Islamic State attack on U.S. soil is "a matter of when .. not if."

And he suggested that the administration, which has U.S. troops helping to train government-backed forces in Iraq, is not doing enough.

Secretary of State John Kerry and other top U.S. officials said last week that coalition forces have launched 2,000 airstrikes in Iraq and Syria that have killed Islamic State leaders and thousands of its fighters. However, Walker suggested the U.S. must do more.

“We must take the fight to ISIS and other radical Islamic groups,” he told ABC.

The administration is reluctant to send troops to the Middle East to fight the militant group, considering the move would be unpopular among Americans, after recent U.S. wars in Iraq and Afghanistan.

Walker leads all potential GOP candidates, according to a Bloomberg Politics/ Des Moines Register Iowa Poll released this weekend. He has 15 percent of the vote, with Kentucky GOP Sen. Rand Paul in second with 14 percent, following Walker's rousing speech last weekend at the Iowa Freedom Summit.

“You can make all of the speeches you want,” Walker also told ABC. “But people want new, fresh leadership.”

He also suggested that he or perhaps Florida Sen. Marco Rubio, another potential 2016 Republican presidential candidate, could beat presumptive Democratic front-runner Hillary Clinton because they each are a “name for the future.”

He suggested the Clinton name is now synonymous with 20th century ideas and Washington, top-down government.

"Former Secretary of State Clinton embodies all the things that we think of Washington," Walker said. "She lives here, she's worked here, she's been part of the Washington structure for years, not just as a Democrat, but across the spectrum."

Walker has won three elections in the past four years, but Wisconsin has not voted for a Republican president in the past three decades.

On the issue of immigration, Walker said Sunday he opposed “amnesty” for people who have entered the U.S. illegally, but appeared to suggest that deporting the millions now in this country is not a practical solution.

Walker was in Washington this weekend meeting with potential campaign aides and donors. And last week, he announced the formation of a political nonprofit group ahead of a potential White House bid.